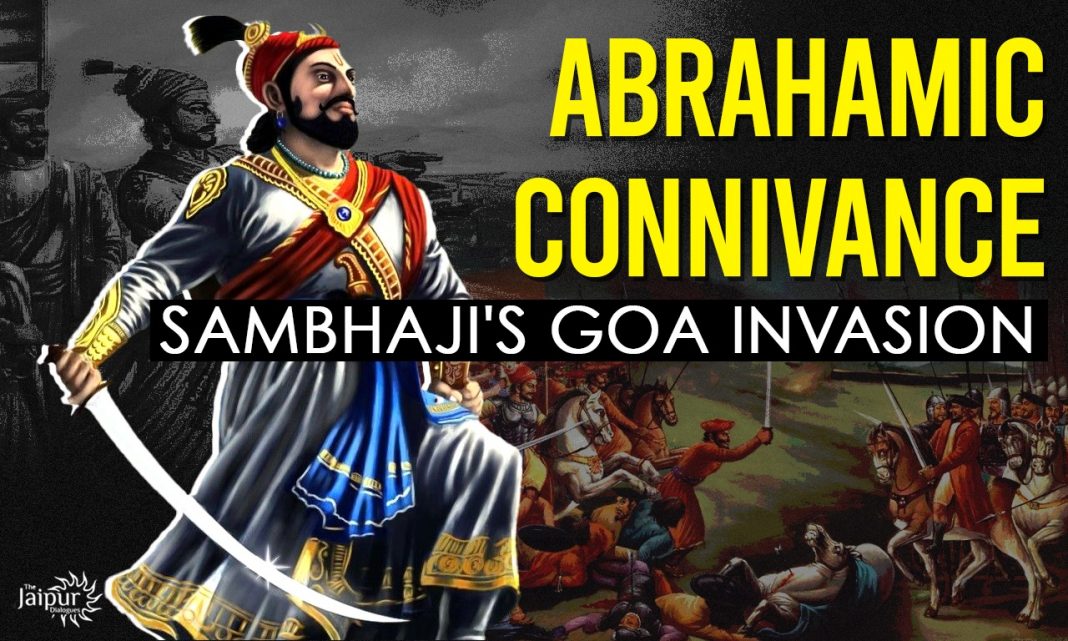 There’s nothing strange considering how Portuguese pleaded for help from the Mughals to save them from the Maratha Empire. Abrahamics will always stick with each other, due to their commonalities. It’s for Hindus to realize the common danger.

It is necessary to grasp the role that the Abrahamics played in sabotaging the Maratha attempts to save Goa. Goa has been through a very traumatic, brutal, and horrific past in its past. Hindus in Goa were tortured and humiliated by the Portuguese, who wanted to convert them to Christianity. Sambhaji Maharaj decided then to free Hindus from the grip of the vicious Portuguese.

In April 1683, the Maratha warrior Sambhaji Maharaj decided to conquer Goa to protect Hindus. Sambhaji defeated the Portuguese in a campaign known as Sambhaji’s Invasion of Goa. Additionally, he was on the verge of capturing the Goan territory after leading a successful campaign. When Sambhaji was successful, the then Viceroy of Goa sought help from the tyrannical and cynical Aurangzeb. Taking advantage of a moment of opportunity, Aurangzeb attacked the Marathas. He decided to attack the Raigad fort (the Maratha capital) instead of facing bravely from the front. Aurangzeb sent his army general Shahbuddin Khan to seize Raigad from north Konkan. His son Muazzam was sent to invade and conquer South Konkan, Ramdara, as well as other Maratha territories.

Kudal and Bande were burnt down by Muazzam’s forces on the 28th of December 1683. Muazzam’s forces destroyed and looted temples and burned Dicholi on 15th January 1684, as well as looting the Vengurla port. Muazzam decided to leave Konkan before the rainy season began. Mughal army faced losses during their return to the capital, due to lack of food, continuous Marathas attacks, and diseases. Muazzam’s expedition to Konkan ended up being a big failure.

Sadly, the Marathas were outnumbered by the combined Mughal and Portuguese forces. Marathas were forced to abandon their aim of liberating Hindus in Goa. Sambhaji fought and defended on a number of fronts, including liberating Goa and protecting his own land. To be fair, it wasn’t surprising that the Portuguese and the Mughals conspired together. Essentially, Abrahamic religions share a common goal, which is to convert and spread their beliefs.

The largest religious groups on Earth are Christianity and Islam. Is that a hard nut to crack? Of course not, since both work on the same premise. Compromising on religious fundamentals is non-negotiable for the Abrahamics. All this sham of free speech and freedom of expression are reserved for those who disagree with their practices. Isn’t it strange that India is one of the most targeted countries by the West when it comes to human rights and welfare issues? The truth is that western-dominated institutions have conveniently avoided highlighting the humanitarian crises in Afghanistan, Pakistan, and Bangladesh.

Whatever they show, the reality is that the Abrahamics will always band together to defeat Hindus, as earlier. Prior to independence, Britishers used ‘Minority Status’ to appease Indian Muslims, demonstrating their fondness for one another. We must understand that for Abrahamics, the ‘enemy’s enemy is a friend.’ The ease with which the Portuguese and Mughals collaborated to defeat Sambhaji is an example in and of itself. Hindus have always faced multifaceted attacks from Abrahamics, but the unfortunate reality is that they don’t want to realize it. Though Sambhaji was winning Goa, his unprecedented success alarmed the Portuguese, prompting Aurangzeb to launch an attack on the Marathas. He not only fought the Marathas, but despite being a religious fundamentalist and zealot, he didn’t attack the Portuguese. As a matter of fact, it is in Hindus’ best interests to understand who their true adversaries are. Because they are fighting a common enemy, Hindus, the Abrahamics will always work together to save themselves.