Is Music Haram in Islam? 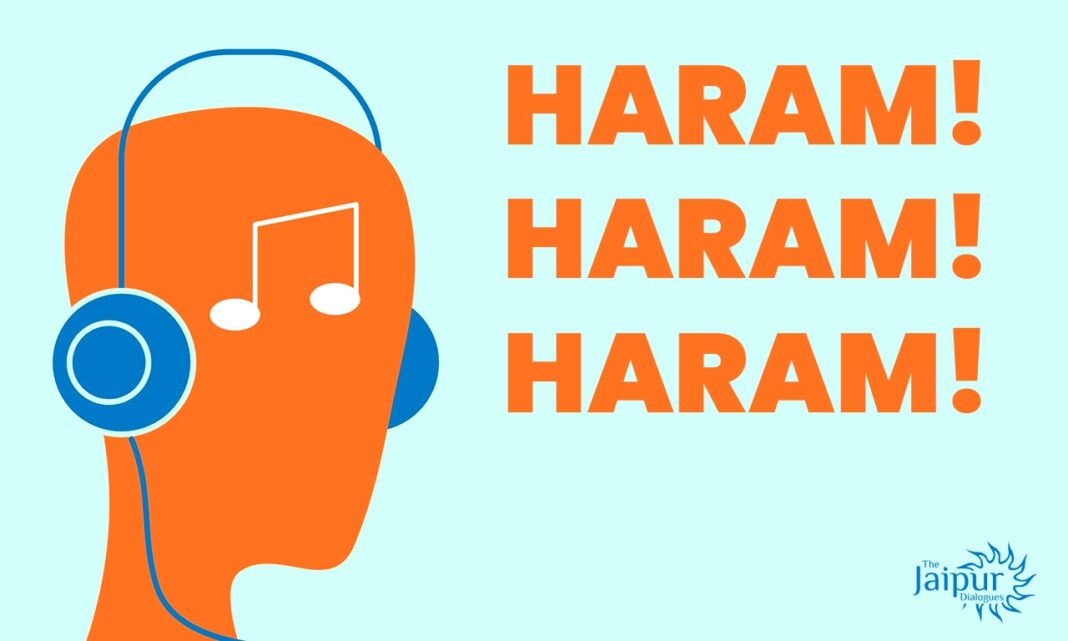 “And of mankind is he who purchases idle talks (i.e. music, singing) to mislead (men) from the path of Allah…” [Luqman 31:6]

Al-Sa’di (may Allah have mercy on him) said: this includes all manner of haram speech, all idle talk and falsehood, and all nonsense that encourages kufr and disobedience; the words of those who say things to refute the truth and argue in support of falsehood to defeat the truth; and backbiting, slander, lies, insults, and curses; the singing and musical instruments of the Shaytan; and musical instruments which are of no spiritual or worldly benefit. (Tafsir al-Sa’di, 6/150)

Despite Islam’s opinion that music is abominable, we all listen to Sufi and Ghazal singers. There is a great deal of hypocrisy in the fact that most of these singers are Muslims. Hence, the question arises: why are Sufi songs promoted as hymns of love and peace if it’s not permitted?

Music As A Tool of Jihad

The way they propagate their religion is irrelevant to Islam, whether it’s through love or violence. Converting the Kafirs and bringing them into Islam is what matters in the end. Sufis are no different from radical Islamists, it must be stated clearly. Because they are primarily dedicated to spreading and implementing Shariah laws, they do not compromise on that. The Sufism that we see today is but a sugar coating over the bitter and dark reality of Islam filled with violence.

Why do so many Muslims around the world practice music even though it is haram and encourages disobedience?

“The interpretation of the Sahabah and Tabi’in, that ‘idle talk’ refers to singing, is sufficient. This was reported with sahih isnad from Ibn ‘Abbas and Ibn Mas’ud. Abu’l-Sahba said: I asked Ibn Mas’ud about the ayah (interpretation of the meaning), ‘“And of mankind is he who purchases idle talks’ [Luqman 31:6]. He said: By Allah, besides Whom there is no other god, this means singing – and he repeated it three times. It was also reported with a sahih isnad from Ibn ‘Umar (may Allah be pleased with them both) that this means singing.

Many Indians and Pakistanis know Chhaap tilak, which is considered a cult classic among music connoisseurs. The song Chaap Tilak was originally written by Amir Khusro and has been sung by many singers over the years. In our ignorance, however, we remain oblivious to the hidden agenda behind the lyrics of any such composition. The following lyrics “छाप तिलक सब छीनी रे मोसे नैना मिलाइ के”, is a direct indignation and a veiled threat to the Brahmins. A symbol of Brahmins, the tilak, was indirectly mentioned to demonstrate the direct threat Islamists posed to Hindus.

“They ask you (O Muhammad) about the spoils of war. Say: ‘The spoils are for Allah and the Messenger.’ So fear Allah and adjust all matters of difference among you…” [al-Anfal 8:1]. But using music is the opposite of this idea of taqwa and it would distract them from remembering their Lord. Thirdly, using music is one of the customs of the kuffar, and it is not permitted to imitate them, especially with regard to something that Allah has forbidden to us in general, such as music. (al-Sahihah, 1/145)

If music is haram and practiced by Kafirs, then why do we hear songs laden with Islamic words? The words Allah, Khwaja, Sufiyana, et al have been mentioned in many Bollywood and Lollywood songs. Therefore, something considered Haram is used to propagate Islam, which raises the question: why? Islam and its practices are full of hypocrisy, operating with different standards for Muslims and Kafirs.

It is common for Muslims to propagate music as an instrument of peace and love. In reality, it is nothing more than a tool to colonize non-believers’ minds. Bollywood, especially Muslim actors and musicians, blatantly promote hypocritical love and peace through Urdu words. Isn’t it surprising that Muslims who follow and practice music aren’t subject to punishment under Quranic diktats? Among Muslims, there is a division between those who adhere to deep Quranic principles and those who are more liberal. There is indeed a deep divide, but all of it comes to a pass when it comes to propagating and professing Islam.

For Hindus, it is significant to realize that all this sugar-coating of the preaching of love and peace is called Al-Taqqiyah. Muslims have used the dirty and hypocritical ploy of secularism and the victimhood card against Hindus for decades. However, Hindus were being victimized and used against their own benefit. Throughout history, Hindus have overlooked all the travesties and torture they have endured for the sake of secularism. It begs the question, why doesn’t the same thing happen in neighboring nations like Pakistan, Bangladesh, etc.? To stop this continuous targeting of Hindus, Hindus need to realize that Jihad isn’t only a large-scale phenomenon. Jihad takes place at all levels, whether large or subconscious. To counter this, Hindus should be aware of the ills of Jihad and how it is propagated. Hindus must stop defending anything in the name of openness, tolerance, and open-mindedness.