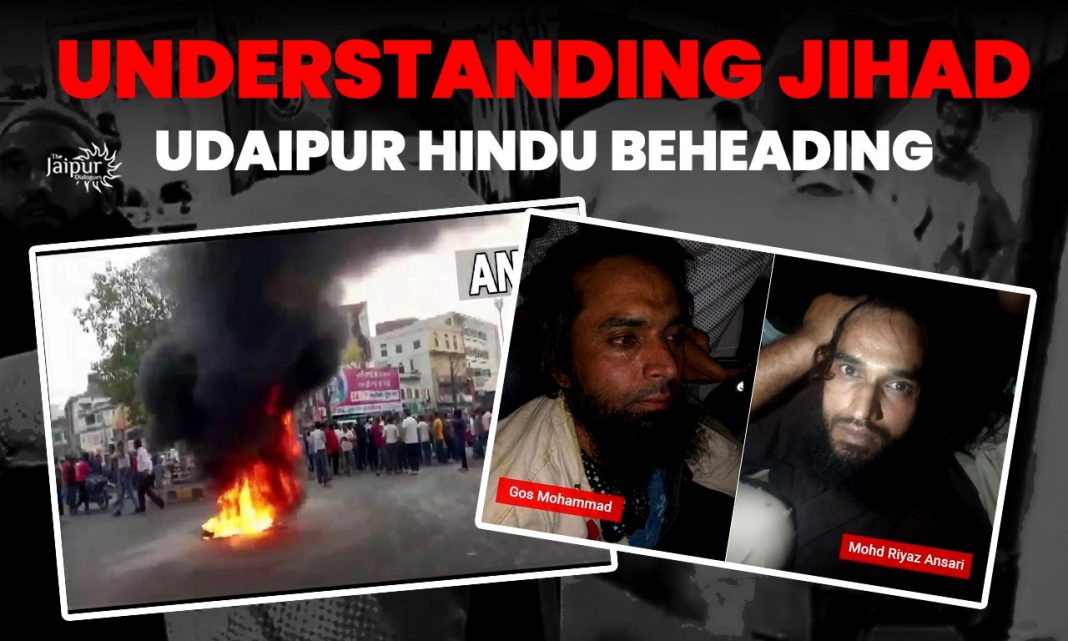 Amidst all the condemnation and noise of the Udaipur incident, one fact that nobody wants to touch or address is the nature of Islamic Jihad, not even the powerful channel.

Yesterday, I was invited to talk on Jihadi Mindset on country’s top English channel. As soon as I started talking about the roots and nature of Jihad, I was told not to take the name of any religion. This is truly craven behaviour by our country’s elite media, and is practically displaying the terror they are experiencing. It is the same all across. All political parties, whether the ‘nationalist’ BJP, or the ‘secular’ parties, they all routinely pay obeisance to Jihadi terror by saying ‘terror has no religion’. This prevents an objective assessment of the threat. It gets further compounded when the topmost leaders kowtow to the international Islamic veto as was witnessed in our abject capitulation to Qatar on the Nupur Sharma episode. This one signal of surrender has emboldened the Jihadis all over the world, including the ones who were hiding under the woodworks in India.

To understand Jihad, one has to understand the basic claim of Islam on the earth and its resources. For example, The Qur’an says that the earth belongs to Allah. ‘He causes it to be inherited by whom of His servants He wills. (7.128.) On the basis of it the Prophet rules that all land belongs to God or himself, the natural corollary being that all land belongs, through God and the Prophet., to the Muslims (Bukhari 3167). Add to it the principle that denying the word of Allah is oppression against the Muslims, and Jihad is a fight against oppression. Jihad is also Farz, or an obligation (Qur’an 2.216), and Maududi defines the Greater Jihad (Jihad an-Kabira as a Jihad with all one has at one’s command – tongue, pen, wealth. life, and every other available weapon.

How is this target to be achieved. This is defined very well in a modern Pakistan Army General. Brig (later Major General) SK Malik’s ‘Quranic Concept of War’ describes the process of Quranic War or Jihad in a remarkably candid but true to tradition interpretation. He writes – Terror is not a means to an end. Terror is the end. Terror is what we wish to impose on the enemy through war.

“Terror can be instilled only if the opponent’s Faith is destroyed . It is essential in the ultimate analysis, to dislocate [the enemy’s] Faith. Those who are firm in their religious conviction are immune to terror, a weak Faith offers inroads to terror.

“Therefore, as part of preparations for jihad, actions will be oriented on weakening the non-Islamic’s Faith, while strengthening the Islamic’s.”

What that weakening or ‘dislocation’ entails in practice remains ambiguous. Malik concludes, “Psychological dislocation is temporary; spiritual dislocation is permanent. The soul of man can only be touched by terror.”

This strategy has been practised right from the earliest days of Islamic Rule in India and has been well articulated right from the days of Sheikh Ahmad Sirhindi to Shah Waliullah to modern Deonbandi and Barelvi scholar. We at Jaipur Dialogues have started translating volumes of Fatawa Alamgiri, the veritable Mohammadan Law in India for that very purpose. The Islamist does not seek co-existence, he only wants domination. Yearning for co-existence vs yearning for domination is always an unequal battle, both physically an psychologically.

The disastrous policy of not speaking the truth and appeasing the Islamic supremacists who treat the Constitution, Democracy and the Republic as temporary irritants in their quest of ultimate domination, complicates the relationship with those wanting peace and those seeking to fulfil the Prophecy of the Prophet who clearly said that ‘I have been ordered to fight till all earth belongs to Allah (Qur’an 8.39). One would like to recall what Dr. Ambedkar said in his classic ‘Pakistan or the Partition of India’ – “that there is a difference between appeasement and settlement and that the difference is an essential one. Appeasement means buying off the aggressor by conniving at his acts of murder, rape, arson and loot against innocent persons who happen for the moment to be the victims of his displeasure. On the other hand, settlement means laying down the bounds which neither party to it can transgress. Appeasement sets no limits to the demands and aspirations of the aggressor. Settlement does. The second thing the Congress has failed to realise is that the policy of concession has increased Muslim aggressiveness, and what is worse, Muslims interpret these concessions as a sign of defeatism on the part of the Hindus and the absence of the will to resist. This policy of appeasement will involve the Hindus in the same fearful situation in which the Allies found themselves as a result of the policy of appeasement, which they adopted towards Hitler.”

Thus, the call to behead blasphemers is just a tactic to instil terror as a part of the overall strategy of Jihad. It can be defeated only if we diagnose it correctly. Political will for making the correct diagnosis does not seem to be there with the present national government. The collective anger of the Hindus might just force them to walk that path. For that, the utterly confusing ‘same DNA’ theory will have to be given up too.