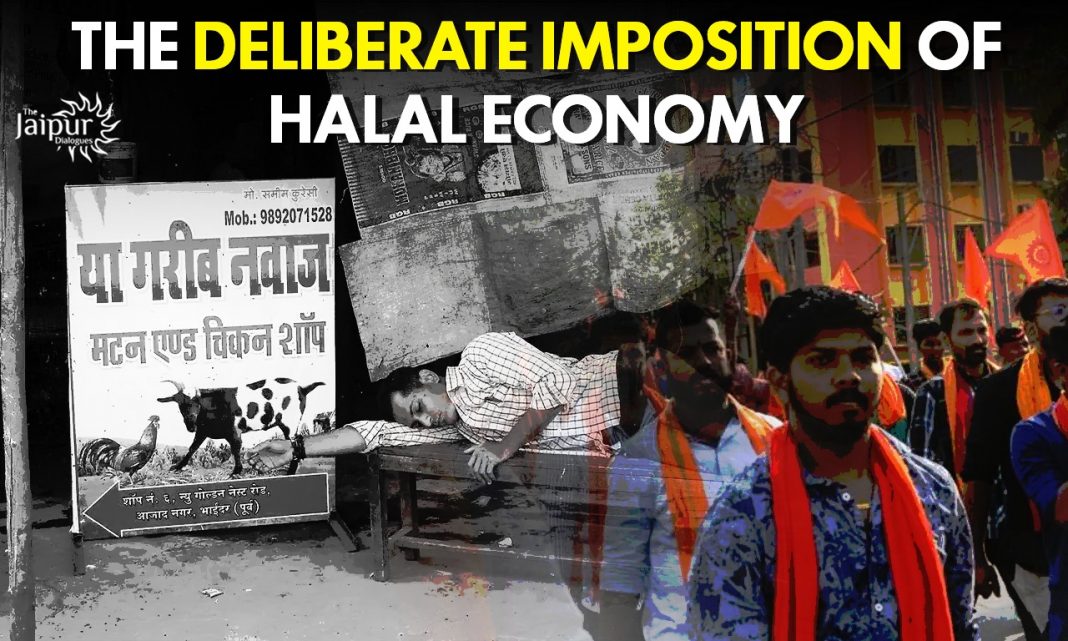 The deliberate imposition of Halal as a religious belief by Muslims on the non-believers worldwide, is nothing but a geo-politic strategic war adopted by the former. It is essential for everyone else to realize the threat they are facing, before it gets too late.

The hypocrisy and bigotry of Islamists and Muslim sympathizers over the use of Halal-certified products has gone too far. Islam has two concepts, Halal and Haram. According to Islam, Halal means lawful or permissible, and Haram means illegal. Halal does not simply refer to dietary habits but encompasses all aspects of life. The act of traveling alone with an unknown male without an accomplice is Haram. Added to the list of imposing Halal practices is that many Muslim countries are creating Halal complexes.

Halal has become a symbol of piety and obsession, which is being used to compel non-Islamists to buy Halal products. From cosmetics to shoes and clothes to food, Halal-certified products cover a wide range of goods. In addition to economic arm-twisting, pushing people to buy Halal-certified products is a clear-cut case of bullying based on religious norms. The concept of imposing Halal goods is the same as that of waging Jihad or Holy War, which implies a crusade for a belief or principle. Imposing Halal is essentially sub-consciously shaping consumer culture and psyche. Essentially, this is a mental Jihad practiced by Muslims across the globe under the guise of a fundamental right.

Recently, BJP’s national general secretary and former Karnataka Minister of Culture C T Ravi called Halal an economic jihad, rightly so. Hindus must understand the underlying premise of the Islamist narrative. The fact that Parle-G, HUL’s products, Patanjali Ayurveda, Britannia, ITC, Dabur, Tata Chemicals, and many more now offer Halal-certified products isn’t surprising. The real question is why these companies are afraid of losing out on a consumer market of 200 million in India, rather than the other 1 billion? Is the minority such a dominant force that even the considerations and sensibilities of the majority are nonexistent?

Hindus themselves are unaware of this economic slavery, which is causing them to become ideologically weak. Hindus have become too accepting and accommodating, and if not addressed on time, this may be dangerous for the future. The imposing of Halal practices not only hurts the economy, but Halal meat itself has negative effects on the environment, as well as on the physical and mental well-being of those who consume it.

Due to the huge consumption of red-meat products, especially beef products, greenhouse gas emissions have increased, disrupting the ecological balance. The Halal method of slaughtering an animal isn’t only torturous and painful, but since it is a slow death, the animal releases stress hormones as it feels continuous pain. By consuming Halal meat, a person’s body is exposed to stress hormones, making them more anxious and tense.

Those who wish to consume non-vegetarian food should consume Jhatka meat as was directed by Sri Guru Gobind Singhji Maharaj as the proper way to go about it. Since Jhatka slaughter ensures immediate death through decapitation, there is no chance of stressing or scaring the animal.

Animals left to bleed to death, once their throats have been slit, are a testament to the cruelty of Halal. In addition to being barbaric, this is also inhuman and obvious bigotry on the part of the so-called peace-loving community. Halal as a practice has been imposed on non-Muslims by a belligerent community of people who refuse to alter their religious beliefs. Below are the fundamental requirements for Halal, which are in direct opposition to Hindu cultural practices and value systems:
• The animal must be facing the Kaaba, the holy place for Muslims
• Only a Muslim can slaughter an animal
• It is essential to recite Kalma during the slaughter
• Most importantly, only the carotid artery and the trachea of the animal must be slit              and the animal ‘must’ bleed to death.

Halal practices have gradually taken over the global food supply chain, and many major airlines and hotels have Halal certificates to offer their services. Food and pharmaceutical industries, worldwide, have been negatively affected by the excessive pressure to accept Halal practices. Many American major pharmaceutical companies lost billions of dollars by substituting beef gelatin for pork gelatin in the production of their medicines.

Karnataka’s recent decision to permit the stunning of animals before slaughter isn’t only much needed but also a progressive move. Animal rights groups around the world advocate stunning animals before killing them. Here, the animal is stunned mechanically or electrically and then beheaded suddenly. It is widely used in western countries and is called Single Slice Humane Slaughter (SSHS).

Hindus should raise their voice and stop encouraging the Halal economy that has been forced upon us, without conscious consent. It is nothing but bigotry to use religious diktats in place of health and hygiene standards to justify the practice of Halal. The compulsory use of Halal certification is nothing more than a ‘strategic geopolitical religious warfare’. It is aimed to ensure the victory of Islam over the world. With already having lost so much, Hindus can’t afford to be on the back-foot any further. They should now come out to show their unity and unanimity. Else, fighting a lost war has no merits and it is always wise to strike when the iron is hot!