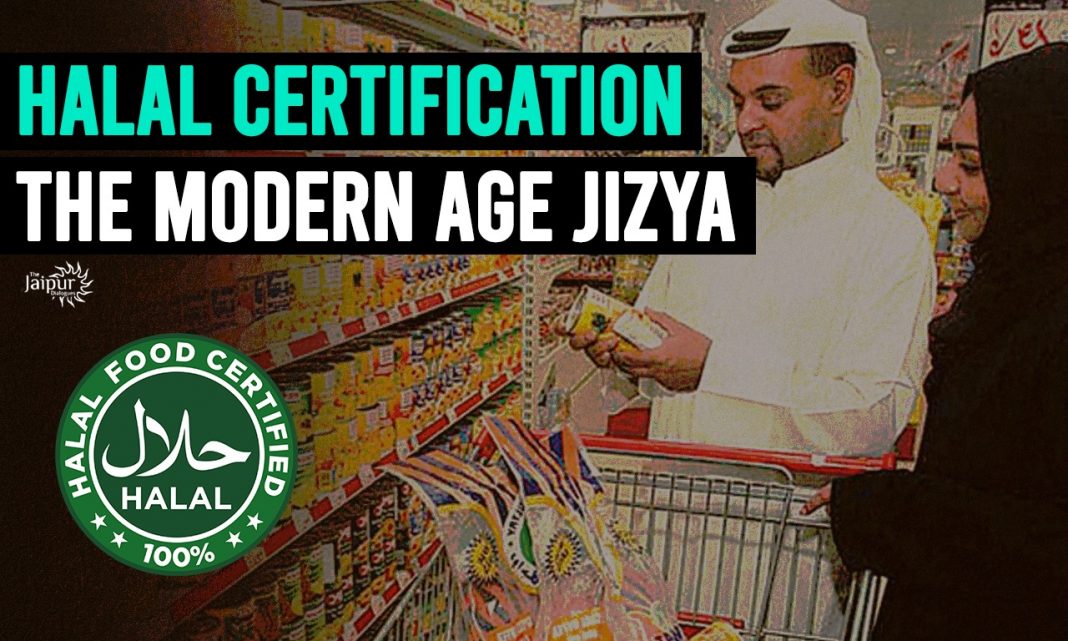 From companies like Patanjali to Hindustan Unilever, everyone is bending over backwards to line up for Halal certification. But when and how did this Halalonomics seep into secular nations and started penetrating the international markets? How did the modern age Halal grow so much that it escalated from Halal meat to products like Halal Certified Cement (Whatever that means)? And If Halal is Shariah compliant, why are Non-Muslims forced to accept this exclusionary system of Modern age Jizya?

Islam classifies dietary products as ‘halal (permissible)’ and ‘haram (prohibited)’ for Muslims based on the Quran and the sayings of Prophet Muhammad (in Hadiths).

The following are the verses which hints the believer in this direction:

As per the halal procedure, the animal must be rested on its left flank to maximize blood loss. It must also be facing the direction of Mecca (Qiblah).

For Halal slaughter, the incision must be made on the neck and below the gullet. The trachea, oesophagus, jugular veins and carotid arteries of the animal must be cut in one continuous movement without any interruption or delay. A Muslim recites an Islamic prayer during this process, and dedicates the animal or the meat obtained from its slaughter to Allah. This Islamic prayer is known as shahada or tasmiya. Here it must be noted that only a Muslim can perform the act of slaughter.

The finished products then are given a Halal Cerificate, which is a document issued by the Muslim authorities based in the exporting country. The Halal Certification attests that the food product in question fulfills the requirements necessitated by Islamic law for its consumption.

The Department of Halal Certification of the European Union says, “The name of Allah must be invoked (mentioned) at the time of slaughtering by saying: Bismillah Allah Akbar. (In the Name of Allah; Allah is the Greatest.) If at the time of slaughtering the name of anyone else other than Allah is invoked (i.e. animal sacrificed for him/her), then the meat becomes Haram “unlawful.”

The Halal industry makes it mandatory for a person to be a believer and to admit that Allah is the greatest god, because if he doesn’t then the meat becomes Haram. The process of Halal goes on to explain further that the equipment used for its production should not be contaminated with ‘najis’ either. ‘Najis’, as per Sharia law, are substances that make a product ritually unclean. Substances such as alcohol, dogs, swine, and milk of animals Muslims are not permitted to drink and other such things are considered ‘Najis’.

By selling a commodity that has an Islamic prayer recited upon it, and has been dedicated to Allah, the vendors of halal products are imposing Islam on all their non-Muslim consumers.

The multi-million-dollar halal industry thriving on money shelved out by Christians, Hindus, Sikhs and all faith systems including atheists, employs only Muslims.

This discrimination is not limited to the act of slaughtering the animal alone. As an industry, halal-certified food items go through various rounds of processing, namely, chopping and mincing, washing and cleaning, packaging, labeling, and other logistic services. It is mandatory that these acts involving the Halal process are done by Muslims only.

But why isn’t anyone talking about it?

The secular democracies are rigged in the favor of Islam. To be politically correct, people avoid speaking on this world wide process of economic exclusion. Halal is basically economic Jihad and Secularism is the vehicle which is facilitating it. Secular Democracies are helping the fanatics around the world to re-group and create another pockets of ‘Riyasat-E-Medina’ to then declare a final war on Darul Harb. It is nothing but an economic war against the infidels. Islamic fundamentalists recognize the shame instilled in the hearts of civilized societies about being tagged Islamophobes, racists, and all other such epithets. They exploit this to the fullest until non-Muslims concede to their unfair demands.

A practice which started for Meat has now made inroads in the vegetarian markets after monopolizing most of the Non-Veg markets. Spices, vegetable oil, cereals and many other grocery products that we find at our local stores bear the halal mark. The business activity creates cash off every one of these Veg and non-veg items by cornering the certification process. Numerous Muslims will not eat anything that is not halal, while non-Muslims by and large couldn’t care less. That is the means by which the whole populace overall is paving the way for the schemes of the Islamists.

What needs to be done?

What needs to be done here is, people should start promoting Jhatka meat. In this method of slaughter, the animal is killed instantaneously without the suffering like it does in the Halal process of slaughter. In Jhatka, the head of the animal is immediately severed and therefore, it is not bled to

death slowly. Another key difference between Halal and Jhatka is that Jhatka has no religious process that it follows and therefore, can be consumed by everyone regardless of religious affiliations.

So Next time you buy Halal products, keep in mind that organization like Jamiat Ulema-e-Hind (JUH), one of the oldest halal certifying trusts in India, is constantly in the news for their legal support to the accused in terror-related cases. Create awareness. Insist on Jhatka whether buying meat online or having cooked food from any restaurant. It’s a tough road, but it’s necessary for the survival of our civilization.