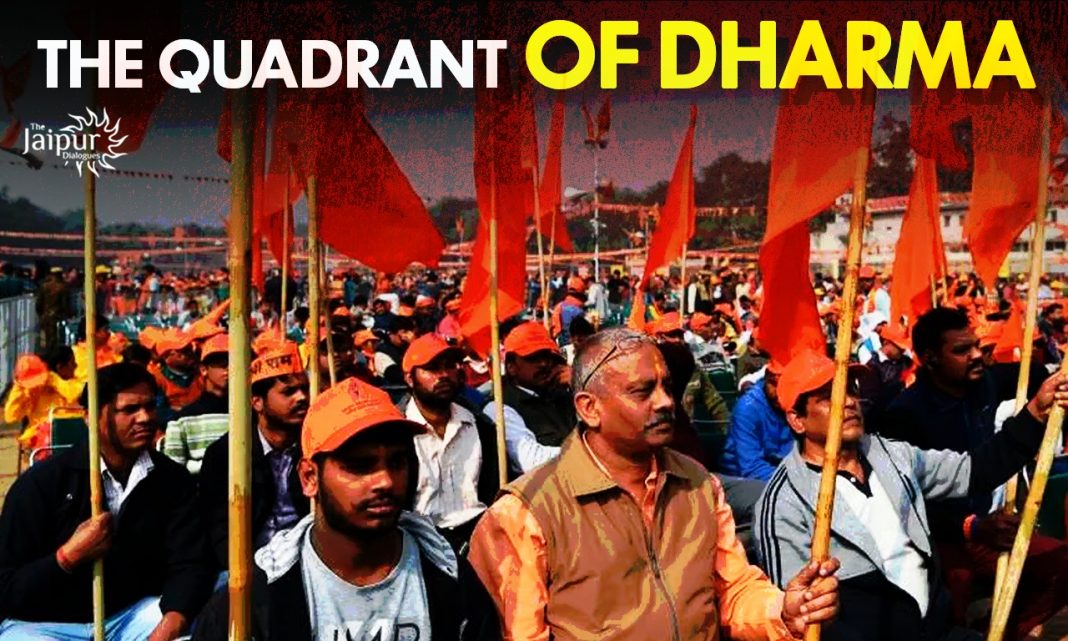 If we see today’s world is developing and progressing leaps and bounds in many ways i.e. technologically, scientifically, politically. Many aspects still remain untouched and even out of the context of the present narrative in the world order. Environment is presented as the major talk of the town but fundamentally the people who are setting ideas, theory and practices to resolve environmental issues, standing at the forefront, are living and building flawed foundations since years. There is a major defect in the basic ideas forming the basis of modern world and their aims seem unrealistic and even un-foresighted because of the very limited parlance of growth and development before them.

Dimensions of human potential growth and achievements are led by material assistance, welfare state concept where health and education are a commodity, and very slyly the responsibility of personality development created into a buzz word for the mushrooming motivational speakers.

In the background of some really commendable scientific and technological achievements in space, AI, particle physics, quantum etc. giving hope for an advanced human society, but until the human themselves are not advanced what is the guarantee that this advancement will prove fruitful to them. If the scientists want to revolutionize the present society through quantum entanglements, and quantum teleportation but if they don’t know in what way to revolutionize human itself, the whole efforts would result into destruction and disparity. This must be the biggest quest for not only scientists but each and every human being and the human race right now. The continuous disconnect of humans with the nature, disharmony settling between the other biodiversity and human race; what kind of future we see for the world in current scenario. To disclose the secrets of nature one has to know nature, know themselves. However, there is a complete mess of all the techniques modern world claims to invent to make the human realise its true potential, nearing a path of greater truth and solace. These techniques are like a mix and match of Choco latte and some kind of green spinach smoothie in the name of “aayurvedaaa”.

If one say, yes there is a way given by ancient Indians. But sadly, that is being sold in the name of glamour. World glamourizes Swami Vivekananda as a ‘secular’, spiritual leader who gave the idea of “universal brotherhood”. Yoga and Ayurveda are being adopted in a good way, yet falteringly dismissing the basic ethos of Bhartiya lifestyle shaped by the knowledge of veda-aagam parampara since thousands of years. Giving them a colourless (secular) flavour shastras are hate-mongered and stamped as tyrannical. It is very important to clarify here, that to understand the ideals by Swami Vivekananda ji of universal brotherhood cannot be realised by giving speeches on equality and fraternity. If you really want to understand that emotion of seeing ‘brahma’, ‘god’ in each one of the being, you have to be a ‘yogi’, a ‘sadhak’. A yogi who has dived deep into the life, who has urged to plunge deeper in oceans of truth and nature; who wants to touch the fathomless ocean of secrets within himself. And when this yogi comes out from the fathomless ocean with ‘mukta-mani’ of ‘brahma’ and ‘para-vidya’ then his ‘drishti’ can unconditionally see ‘Brahma’ in every being. So the only way to realise that universal unity, one has to go through rigorous procedure in ‘adhyatma’ and reach upon the ‘ekatm-ta’

Current world seems untouched by this idea and they think that universal brotherhood is some kind of abstract idea which can be instilled in people through ‘pill’ which makes one ‘elevated’ and everything becomes ‘enlightened’, beyond and above above national, regional, physical and personal boundaries. So to say, people should know that this ‘ekatma-ta’ can be achieved beyond this physical dimension, which is abstract for the physical dimension but very much physical in the dimension of ‘chitta’ and ‘para’.

After all this background batting it is important to clarify the right and the wrong way. There is no right or wrong. There is always something which enhances the inner pure strength in human being to realise the true self and the other is which may seem very glamorous at first but brings a downfall of the beings. That former lifestyle was of devas and the latter was of asuras. Where devas enrich themselves to a path of ‘atma-sakshatkar’ and ‘brahma-chintan’; asuras kept involving in material pleasures and progress. Because after a point of time when pleasure becomes a habit and mindset, materially advanced human race starts behaving like an animal. Like some woke ideals of YOLO (you only live once), where present moment consumption of pleasure is the ultimate goal of life, this can be said as ‘aasuri pravritti’. (This example was given by Satynarayan Das Bababji in talks with Rajiv Malhotra ji in one of the videos). And even an animal can gain ‘brahma-tatva’ with constant perseverance and ‘sadhana’, mentioned multiple times in puranas.

So, instigating this binary way of life in this article (though I don’t believe in binaries, but for most of the world it is a binary) lets delve upon a similar binary, 2-dimensional approach depicting our problems (so far mentioned in the article) and solutions (to the same issues). A Cartesian model of 2-D graph, plotting x and y axis in the following ways-

These two variables will decide the fate of any society and civilization. Understanding the present condition of the world according to this Cartesian plane, says that world is trailing forward parallel to the x-axis, while a part of the world like Africa and the indigenous societies, aborigines are along the negative x-axis but they are very high along the y-axis. So they reside somewhere between the second quadrant. India in the time of her glory was flourishing with material advancement and pleasure sustaining her natural inclination towards spirituality. That was a glorious time somewhere at the top right corner of the first quadrant. Where artha and kama, are fulfilled with the base of dharma and moksha. There can be many other observations.

This simple 2 dimensional model may seem crude and childish but it clearly states the aims and objectives of the current society where comes the ideal of sanathana, of four ‘purusharthas’ as very apt and rightful framework to guide the whole human civilization. A simplest attempt to show the future of a really advanced and beautiful society through this first quadrant may seem narrow at the moment but sometimes simplicity brings beauty to the character and that is what is being attempted here. This can be called as the quadrant of dharma, where whole universe can find its place because when beings tread on the path to achieve ‘aatma-bodh’, universe manifests in themselves and that civilization is termed as Sanathan.