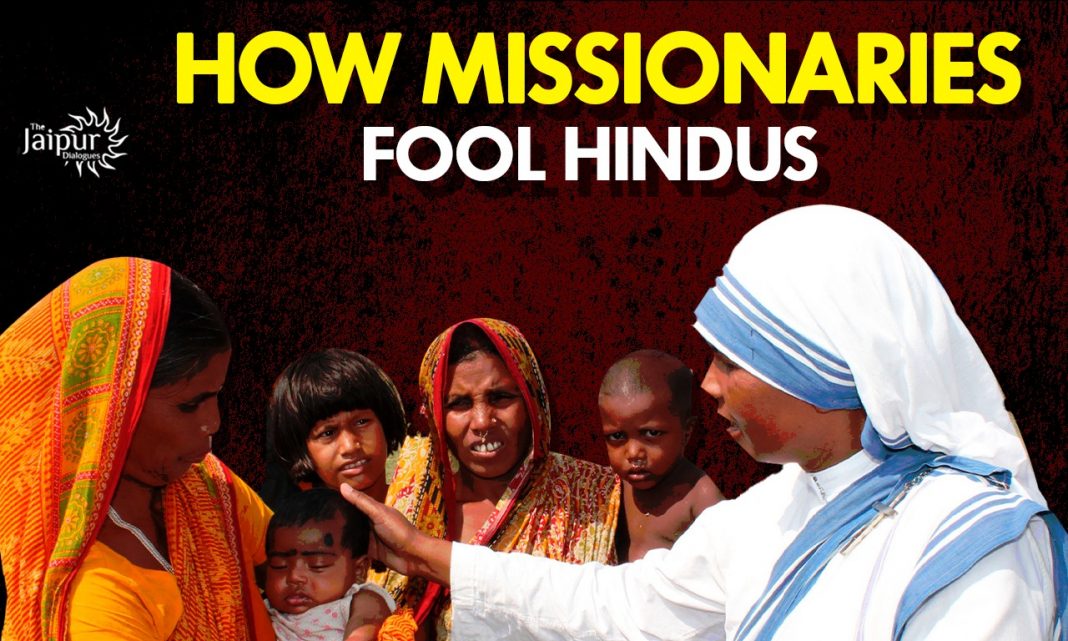 With rampant proselytizing activities undertaken by the missionary mafia in India, it’s important to understand why their tactics are successful in fooling Hindus and how are they able to do so.

In India, Christians are converting a rapid number of Hindus. This has led Hindus to become a minority in several states where Christians are already in majority and are a significant group in eight states. It needs to be pondered as to why and how these Abrahamics are successfully converting Hindus into their own country. It’s a land rich in cultural heritage, unsurpassed wisdom, and knowledge systems, which form the basis for the advancement of so-called advanced Western society. Why are Hindus so gullible to the fiendish and vicious intentions of these missionaries?

To convince Hindus to convert to Christianity, these missionaries have been working through a well-planned systematic trap in India. As applaudable as our central government’s efforts to cancel the FCRA registrations of numerous NGOs (Non-Governmental Organizations) in India over their alleged involvement in promoting Christian conversion activities are, especially given the damage that has already been done to our demographic structure, this step was long overdue.

It is, therefore, necessary to examine why missionaries in India are so eager to convert Hindus. If they cannot convert Muslims elsewhere, why are they so keen to convert Hindus in India? Is poverty the only factor? If this is the case, then why do we not hear about active conversions in Pakistan, Afghanistan, and Bangladesh? Why so many Christians in the West are leaving their faith and what has prompted these missionaries to focus on Hindus?

While Hindus have always believed in universal brotherhood and welcome everyone with open arms, they have lost touch with their roots as they have been too accommodating. This has made them vulnerable to political and cultural attacks from outsiders. The cleverness with which these missionaries have tricked Hindus is both intriguing and intimidating.

Nowadays, it’s not unusual to see cab drivers in major metro cities without a bible. They not only persuade passengers to read the Bible, but they also try to convince them to propagate Christianity. Considering the rampant Christianization taking place in places like Punjab, Chhatisgarh, and elsewhere, it’s imperative to understand the massive network created by western evangelists.

The deception methods used by the missionaries range through a wide spectrum of methods to attack the Hindu community:

1. Direct Contact- Missionaries send letters to entice locals to convert, or produce pamphlets that state the following: A local church in Dharavi (Mumbai) distributed the following: ‘Jesus says I am the path, the truth, and the life. He who has faith in me will live even after death. Jesus cures diseases and relieves from black magic.’, or by distributing Bible and other such books at places of public contact like railway and bus stations, busy crossings, or at signal stoppages. The goal is to ensure that people read these books in their free time, free of charge. Books like this contain stories to engage readers as well as promote subtle mental whitewashing and encourage them to appreciate Christianity.

A lot of times, these books and pamphlets come with an attached form and the address of a local church where you can submit those forms. These forms carry messages similar to, ‘Jesus was crucified because of my sins. May the Lord forgive me. From today, I have decided to accept Jesus as my savior’.

2. Staging Plays– In their plays, these missionaries try to promote subtle messages that indicate those who convert to Christianity will instantly be welcomed into heaven, while those who do not are doomed to rot in hell. Hinduism doesn’t base its entire philosophical premise on the concept of hell or heaven; instead, the focus is on the karmic cycle and Aham Brahmasmi. We have lost touch with our native belief systems due to too much western influence on our society.

Back in 2009, a group of Christian missionaries staged a play in Margao (Goa) which conveyed that, ‘If you worship Jesus, you will attain a place in Heaven’. Some incidents enacted in the play are given ahead. Anthony is a wealthy social worker, but does not believe in Jesus; whereas, Pundalik is an ordinary shopkeeper who has accepted Jesus. Both are killed in an accident. Since Pundalik had accepted Jesus, he goes to Heaven, and Anthony, because of rejecting Jesus, goes to Hell.’

3. Through schools, charity organizations, destitute homes, Hospitals, orphanages, etc- Missionary schools are notorious for teaching young children to disdain their own beliefs, punish them for speaking in their native language or Hindi, forcefully celebrate Christian holidays, while Hindu celebrations and holidays are rarely taken into consideration. The recently reported case was of Lavanya, a young girl who died due to forced conversion in Tamil Nadu, which illustrates this phenomenon. The evangelists similarly target the low-income, orphaned, and ill people at the time they are most vulnerable to entice them to believe in Jesus’ miracles. When young girls from ‘Gurukul Godavari Balakashram’ in Maharashtra Housing Board of Pune pointed toward Mathew Yanmal the manager of the institute, who had forcefully converted them to Christianity, in 2010, a huge controversy erupted.

5. Drawing similarities between Christianity and Hinduism– Zealous missionaries have now come up with a clever trick, i.e. replacing Hindu deities with Jesus and making Hindus believe it. Reading verses from the Bible is known in Kerala as Vedapathan (recital from the Vedas). Tirthakshetra (Pilgrimage Site) has been displayed over some of the churches. Throughout southern India, many Churches have renamed themselves Ashrams. Ironically, priests and nuns have popularized themselves as Acharyas and Sadhvis. Most often, they decorate their premises with oil diyas instead of candles. Some of the organizations have employed Hindu terms like Ishavani and Shrivani rather than Nobelium because this develops a better connection with the people and makes them see the similarities between Christianity and Hinduism. Quite the contrary is the stark reality!

It is very critical for people to realize that these are some of the most common methods of deceiving Hindus used by missionaries. However, the actual attack is a combination of many.

Apart from attacking Hindus and portraying Hinduism negatively, they target the weaker sections of society, who are oppressed. Prisoners who are exiled from society are targeted in an attempt to bring them into Christianity.   Many times, they force marriages between couples, trap people in debt, and then pressurize families to convert if they can’t repay the debt as well as instigate communal riots (Baptist Church in Tripura, for example).

There is a need for Hindus to wake up and stop blindly believing whatever comes their way. This is a threat not only to them but to society as a whole. In comparison to these Abrahamic cults, our Sanatan Dharma has always been the most progressive belief system. It is our responsibility to encourage, strengthen, and promote its value systems.