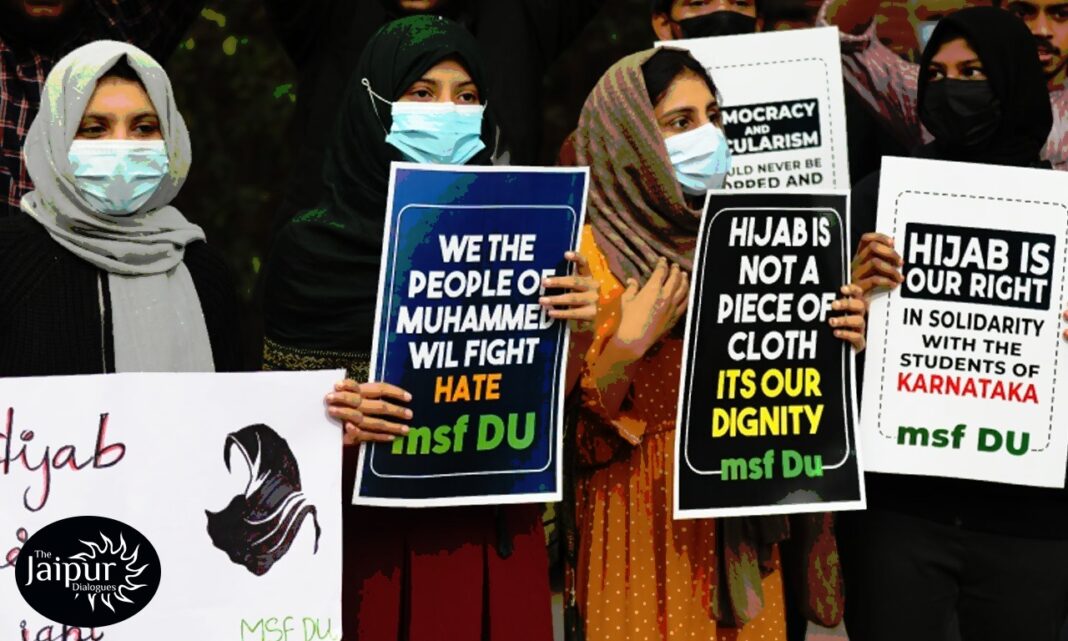 An issue that had been created out of nowhere, by certain leftist-Islamist groups, has now made its way to the Supreme Court. Recently, the voice against so called secularism and its ill effects has consistently been raised. There are so many aspects of religious freedom that are being talked about by various sections of people. But when it comes to any public setup, an institution, what is the point of special rights? When the country has already moved past so many regressive practices, which mostly are attributed to Hindu Dharma, why not Islam should take a leap of faith? Why not Muslim girls be freed of a suffocating, confining and regressive practice of Hijab that have been put upon them by some of their regressive forefathers? Here, let’s call upon those feminist foremothers, who made the freedom flag fly higher and why not help these girls be free!

What Is This Hijabi Hullabaloo?

There has been a non-issue issue being created for over many months. Hijab is a non-essential part of Islam. It does not have any conformity with the religious practice. But the way situations are propelled using school going girls is a pernicious act of provocation.

During the hearing of the same plea in Karnataka High Court, over the use of Karnataka government of section 133(2) of the Karnataka Education Act, 1983.

The Government issued the order to only wear the prescribed uniform to maintain equality and uniformity in school.

This kind of perspective shown by the state government seems alright and is suggestive of a clear understanding of the situation. On one hand, in Iran, women are against hijab. While in India, who is instigating these girls to adopt such regressive practice in the name of freedom of choice?

What Milords Have To Say

With eventual showcasing and lot of hype worldwide, this bizarre trend has reached up to the Supreme Court of India. Supreme Court of India, where speaking Hindi for a lawyer is still downgrading; where there is no place for a non-suited bureaucrat. What more sane and practical approach we could have heard?

Justice Dhulia and Justice Gupta seemed split over the decision. Where Justice Gupta taking a rational stand, affirms, since, Hijab is not an essential practice of Islam, it cannot be taken as a fundamental right. However, justice Dhulia was more of the opinion of freedom of choice of the girls. While denying the time, space and context, freedom of choice can be applied anywhere and everywhere. This is the logical justice.

This is an issue being knowingly created to show that the government of India is infringing the right of minorities again and again. But, on a reasonable note, colleges and universities having no dress-code, never object on any religious/ethnical apparels.

But, when it comes to the institution (school/college/university) where there is a pre-defined dress-code; no matter is taken into consideration. This is a simple rule. And if the liberal gang takes the stand of secularism, then in a secular country no such differentiation or special treatment is acceptable. Or if liberal gang wants freedom of choice, then there are many choices which disparage each other’s choices.