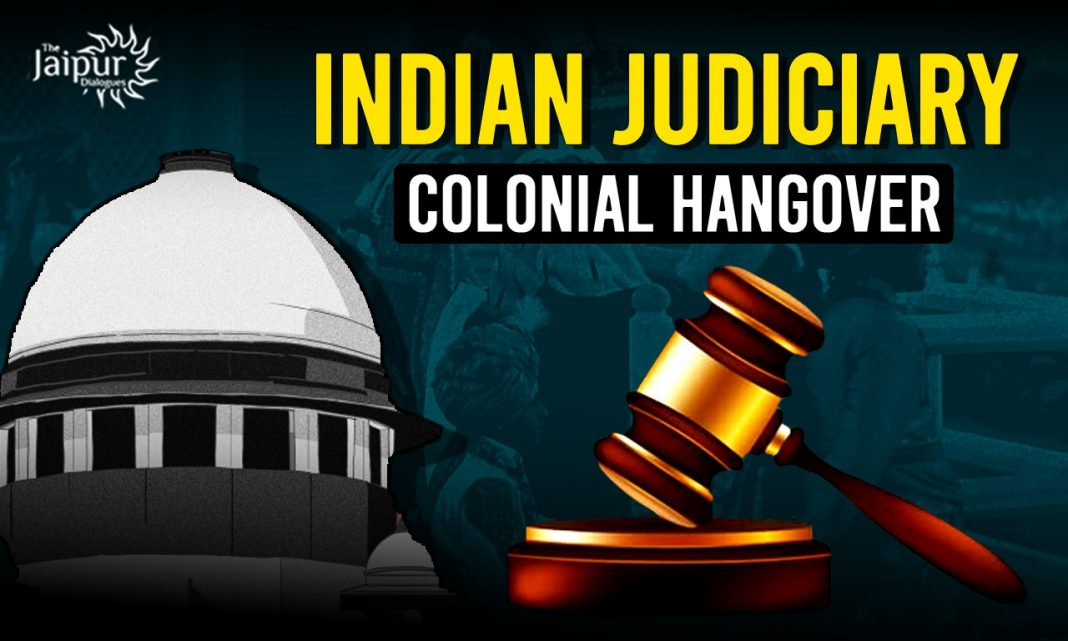 Indian Judiciary has been plagued with corruption and nepotism. In the recent past, numerous verdicts have been given by the judges, which have unfortunately put Hindus and their interests at stake. It’s time to now change the constitution, one from the colonial remnants to focus on the Sanatan ideals.

The system in the judiciary is influenced by the British colonial system and undoubtedly the remnants of the same are visible. Let’s have a look at the way the Judges are addressed, ‘My Lord’ or ‘Your Ladyship’, isn’t it simply a common relic of the colonial past? If it is a subordinate court, lawyers can use terms such as sir or any equivalent phrase in the regional language concerned. Explaining the rationale behind the move, the Bar Council had held that the words such as ‘My Lord’ and ‘Your Lordship’ were ‘relics of the colonial past. The resolution has since been circulated to all state councils and the Supreme Court for adoption but over five years now, the resolution largely remained on paper. – Edex Live Indian Judiciary – Rot in the system

It has been observed on a number of occasions that the Indian judiciary is slow to adapt to changes. Aside from being accused of corruption and biased judgments, the judiciary has also been accused of maintaining double standards. This is an extremely sad and unworthy scenario. Post-independence, Indian democracy was built upon the three pillars of Legislature, Judiciary, and the Executive. Sadly, the Judiciary has overshadowed the other two pillars not just once, but several times. Otherwise, why do we see cases like those involving Salman Khan or Yakub Menon being heard so quickly? Yet thousands of hapless victims are still languishing in jails with no one listening to their cries. It is truly remarkable how our judicial system operates on a dichotomy.

When nepotism is unjustifiable and wrong, why should our judiciary not be criticized as well? It is our constitutional right to express our opinions in a democratic country, as long as they are not violent, threatening, or degrading. Any individual who criticizes the judiciary or judges automatically becomes a pariah and liable for punishment. Judges Pardiwala and Suryakant recently attacked Nupur Sharma in an unjustified, unfounded, and unwarranted manner. However, despite her speaking the truth, they themselves couldn’t handle the social media backlash but rather demanded harsher social media regulations.

In India, this illustrates how much judicial ethos is maintained, rather than how much intolerance the judiciary is showing towards freedom of speech and expression. Their responsibility is to guard those rights. As citizens, we look up to the courts to protect and fight for our rights. Where does one turn if they are biased, unwilling to accommodate, and unsympathetic?

The Judiciary has only the duty of interpreting the constitution, and according to Art.142, they can create certain laws. We all know, however, that the judiciary is not even accountable to the constitution. Besides the way they appoint judges, they also aren’t accountable for the fallouts of their verdicts. In the constitution, it isn’t mentioned that a collegium of judges will decide higher judiciary appointments. Therefore, what and who decides how judges’ function? Let’s focus on one highly prominent issue- the impeachment of judges. According to the Constitution, judges can be impeached by the parliament for various reasons, such as misconduct, corruption charges, etc. There have been various misconstrued judgments, several instances of lack of accountability, and the recent case of Nupur Sharma, where the judges were anything but civil. A situation like this makes one wonder why justice doesn’t work both ways? What are the reasons for the low impeachment rate? Therefore, accountability is absent in the judiciary. It seems remarkable that only four impeachments have been brought in the past 75 years, and only two have been successful.

Much water has flowed under the bridge, and it’s time to reconsider what type of constitution we want for India? The CJI’s recent statement that judges must be loyal to the constitution alone begs the question, why must they be loyal to the constitution alone? Why do the judges vigorously defend the constitution? As a newly liberated country, India was subjected to several social pressures when this constitution was drafted. Our constitution is heavily influenced by the Irish constitution, one from a document that was liberally borrowed from the British GoI Act, 1935. Is it possible to explain our beloved Milords’ deeply ingrained colonial mindset? It is pertinent to understand that the colonial mentality heavily favored servitude, one that discouraged questioning, debating, and even speaking out. Numerous verdicts have been rendered against Hindus or Hindu interests in recent years. HC order on cow slaughter in Uttarakhand is a striking example of the inherent hatred of the judiciary toward the sentiments and sensitivity of Hindus.

India’s judicial system has mocked the feelings of the majority under the guise of promoting and practicing secularism. By vehemently defending the constitution, we are defending a bigoted colonial past.

In order to achieve social harmony, we need a constitution that meets the sensibilities of the vast majority. The constitution should be unapologetic, lucid, and straightforward. In the name of equality and freedom of rights, the judicial system has repeatedly made Hindus scapegoats. It is irrelevant for Indian sensibilities to adhere to secular values centered in Europe, where the state is weaker than the communities. After multiple amendments, Dr. Ambedkar’s original constitution is merely a shadow of what it was originally intended to be. Though Ambedkar was heavily inspired by the Euro-centric model of nationhood, he was right in one aspect. He believed that a nation cannot be built by having two nations living as separate cultural entities in the same geography.

Our judiciary has unfortunately been a staunch defender of Abrahamic ideals that stand in opposition to the values of India. As a result of the current aggressive exclusivity pushed by Islamists and Christians, conflicts, war, and hatred cannot be tolerated. It’s true that secularism has been used as a ploy to damage Hindus and destroy the ancient Sanatan dharma. It’s critical for judges to realize that the prism of judgment should be fair and equitable for all. Justice doesn’t mean using Hindus as sacrificial goats.

India has always been a pluralistic society, which has been welcoming for all, but welcoming doesn’t mean abandoning one’s own identity. Muslims and Christians, if they wish to co-exist, shall follow a code of conduct, guided by the Dharmic principles. Hypocrisy involving the rights of Abrahamic forces, while side-lining Hindu interests, is no longer acceptable. A constitution centered around Dharmic ideals is indeed the need of the hour.