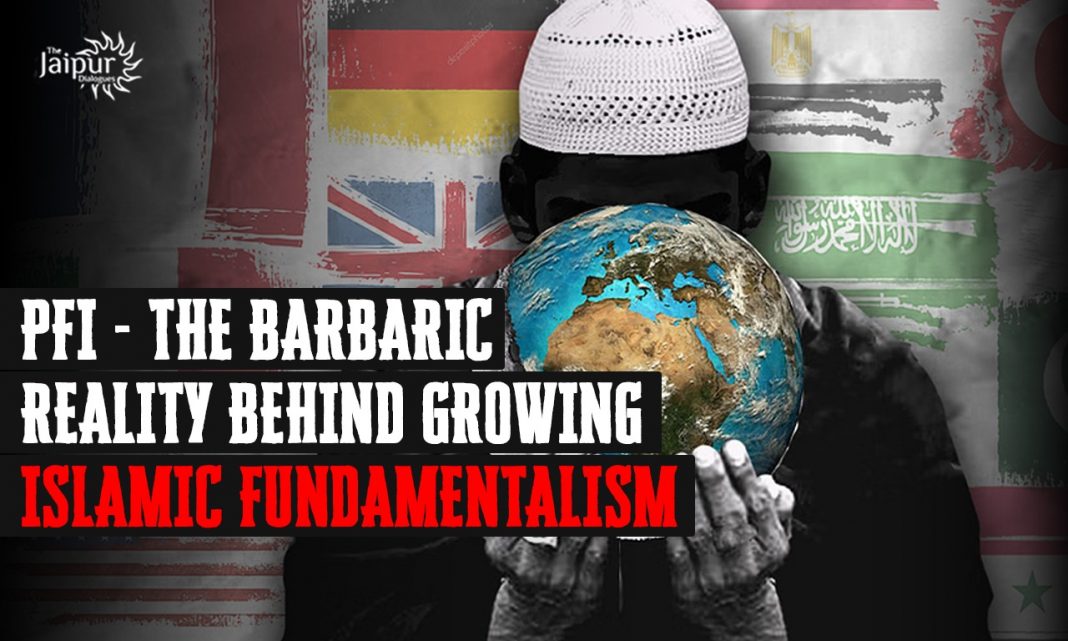 It seems as if a can of worms has opened after the PFI (Popular Front of India) released a disturbing and sensitive document, India Vision-2047. There has been a fanatical campaign against Hindus led by the PFI against Indians. With this document coming to the fore, its terror credentials can’t be discounted, anymore. PFI aims to establish an Islamic Ummah over the Kufr land of India and practice Sharia laws here. PFI’s links are evident in any and all activities surrounding Islamic fanaticism and extremism. As a radical hate-based organization, PFI targets not only Muslim youth but also Hindus, Sikhs, and Christians.

There is a strong connection between PFI and Kerala, a state now infamous for various incidents spreading and propagating terrorism and planning strategies to decimate Hindus. There was a raid by the NIA a couple of years ago on PFI centers in Kerala, where the latter had links to the barbaric and violent ISIS. It is well known that PFI has been involved in radicalizing and communalizing Indian politics. The nefarious and questionable activities of PFI have been closely monitored and are being tracked. There have been many such anti-state events, whether it is anti-CAA protests or events such as Shaheen Bagh. There is a growing demand to ban PFI, which is both legitimate and necessary.

In 2006, PFI was created as an amalgam of three Muslim extremist organizations-the National Development Front of Kerala, Karnataka Forum for Dignity, and Manitha Neethi Pasari of Tamil Nadu. As a result of the 1992 Babri Masjid incident, many such extremist Islamic organizations sprang up in South India. There are 22 states in India where PFI claims it has a presence, and donors from many middle-eastern countries support it.

Considering its extreme fundamentalism and broader outreach among the people, this is both alarming and disturbing. It’s truly worrying that the government is delaying the obvious, despite PFI’s participation in anti-Indian and anti-Hindu activities.

Kerala has become a hub of anti-India activities because there most of PFI’s leaders were earlier members of SIMI. Since its origin, they have been involved in clashes as well as gruesome political murders, hate sloganeering, and attacks. For instance, in 2015, 13 of the PFI workers were awarded life-term for chopping the hands of a college professor T J Joseph because it was believed that he prepared a blasphemous question paper. PFI members have brutally killed people from different ideologies.

The real threat of PFI

Under the guise of falsely propagating religious ideas, PFI has misappropriated secular ideals to further its own agenda. Police have found many PFI’s members to be in possession of lethal weapons, gun powder, bombs, weapons, swords, etc. Additionally, they allegedly have links to terrorist organizations like Al-Qaeda, the Taliban, etc. PFI’s states that it fights for the rights of Muslims, who are believed to be oppressed, and also raises voices for the oppressed of society.

In light of the recent document released by the PFI to make India an Islamic state, we must understand the ill motives behind it. Hindus must recognize that the devil is already knocking at their doors. The ‘Hindu-Muslim Bhai Bhai’ syndrome is a way Hindus display their secular credentials. Muslims see Hindus as cowards who should be subjugated. Rather than being a pan-Indian issue, it is a global problem. One should understand that it is not limited to some states. The onus lies not only with the government and administrative machinery but also with the people of the country. The Hindus are in a vulnerable position, and being gullible and blind helps no one. The Hindus must realize one thing: minorities in Islamic nations, especially Bangladesh and Pakistan, suffer far more than they might ever imagine. In spite of the grim reality, there is no denying the fact that Hindus have only one nation to call their own, and that is India.