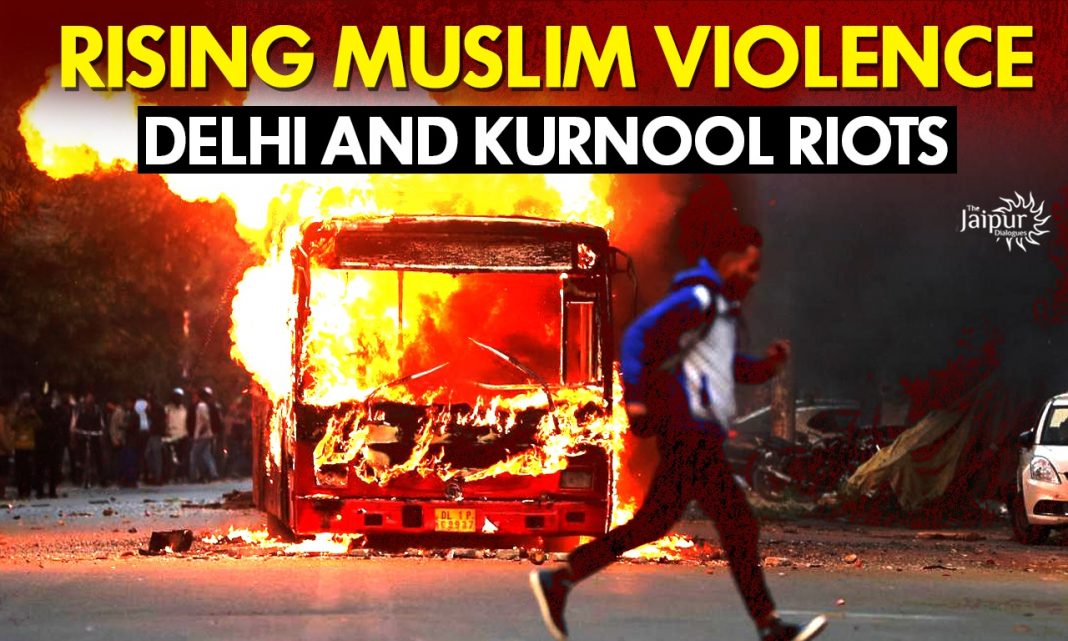 Atrocities committed by Islamic fundamentalists against Hindus are increasing at an unprecedented rate. This is the sad reality of what our secular practices have led to, and Hindus have still not woken up. There is only one agenda of Islamic fundamentalists: establishing Ghazwa-e-Hind and killing all Kafirs. Unfortunately refugees have managed to forcefully occupy Indian soil and have begun oppressing the natives. It is frightening.

Islamists, whether in India or as refugees, all practice the same Dharma, namely establishing an Islamic caliphate. Islamist mobs across multiple cities have shown their utter disregard for the Indian constitution by demonstrating intolerance and disregard for communal harmony. The unchecked Muslim population has put Hindu identity at risk, and the future looks bleak if it is not curtailed immediately.

In the Jahangirpuri area of Delhi city, a peaceful Hanuman Shobha Yatra recently took place. Irked by this, a man named Ansar and his supporters approached the procession and started an argument. In the ensuing argument, he and his companions turned violent towards the people. They began to throw stones at the procession participants, sparking a stampede. In addition to attacking the police, the violent mob demonstrated utter disregard for the laws of the land. The mob indulged in vandalism of public property (burning cars and attacking people relentlessly). In addition to this, Sub Inspector Medha Lal Meena was also wounded by gunshots, fired by the unruly Muslim mob.

The crowd chanted Allahu Akbar (which isn’t communal, by the way!) and brandished swords. The reality is that they are so well-armed because for them every day is a war to establish Islamic rule. The fact this happened in Delhi, where the police falls under the purview of the central government, is concerning.

Hate attacks against Hindus are on the rise because no one speaks out for them. In short, the government’s unsatisfactory actions are disheartening and disappointing. It should be pointed out that Jahangirpuri is a hub of illegal Muslim Bangladeshi migrants, especially in C-Block and H2 jhuggis.

Similarly, the VHP held a Hanuman Jayanti procession in the Kurnool district of Andhra Pradesh which irritated the Muslims present inside a local mosque during Iftar. During the procession, the Muslims complained about the loud music played. In response to the police’s request, the procession moved away from the area, and the music resumed. Following this, even though unprovoked, the Muslims attacked the procession violently and threw stones in a display of intolerance. Kurnool SP Sudheer Reddy attributes the violence erupting to the loud music played by the procession. He said, “The VHP organized Hanuman Jayanti celebrations in Holagunda. They used the DJ sets against the advice of the police. When they went near the mosque, police asked them to shut down the DJ sets. But, they stopped in front of the mosque and started raising ‘Jai Shri Ram’ slogans. In response, the people from the Muslim community started shouting Allahu Akhbar.”

Andhra Pradesh | A clash broke out b/w members of two communities & stones were pelted from both the sides in Alur, Kurnool dist yesterday. Few persons injured in the incident. Police deployed at the incident spot; situation under control. Cases being registered: Police

At present, along with police deployment sec.144 has been imposed in the area, resulting in a state of uneasy calm.

Hindus aren’t able to celebrate festivals in their homeland, which is both sad and disheartening. Due to the rise of Islamist extremism and barbarism, Hindus have been left scarred in their own country. It seems that now Dara Hua Musalmaan is starting to show its true colors, with numerous attacks on Ram Navami and Hanuman Jayanti across India. Minority appeasement policy has not only threatened Indian national security but has also endangered Hindu existence. This extremism must be curtailed soon otherwise, it will have devastating repercussions for everyone.