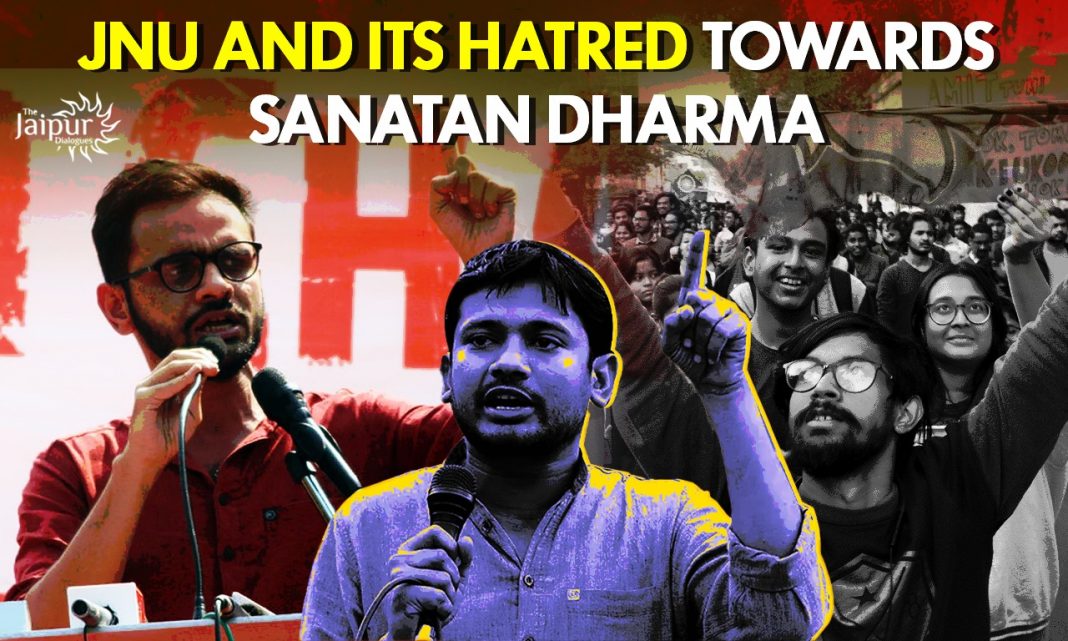 With the recent attack perpetrated by JNU goons against ABVP students on Ram Navami, shows their intolerance and disdain for Sanatani practices.

There are lies, white lies, blatant lies, and then JNU. The leftists’ hatred of Hindus and their traditions isn’t new or unheard of. The entire leftist cabal aims to malign Hinduism with a hostile atmosphere based on hate and negativity. On the campus of JNU, anti-Indian activities have been encouraged and supported in the past.

Violence on the JNU campus on the eve of Ram Navami against ABVP students wasn’t unexpected, but it indicates deeper malice. Across the public education system, leftist academicians are systematically destroying pupils’ cognitive and intellectual capacity, thereby leading to unhealthy perceptions and values. Under the guise of modernity, leftist students are taught to hate and denigrate their own values.

The main point of contention

Recently, left student organizations attacked ABVP students at Kaveri hostel whilst performing Havan and Puja on Ram Navami. In spite of not creating any problems and conducting the Puja peacefully, the left organizations raised a ruckus and attacked ABVP students. This leftist gang did not attack Muslim students who organized Iftar within the mess.

ABVP students announced they would conduct Pooja on campus seven days prior to their event. Yet they were attacked without warning by these leftist goons. Leftist groups initially threatened the students to not celebrate Ram Navmi, but when that failed, they did what is expected. Creating a ruckus, disturbing peace, then crying like a victim!!

On campus, celebrations were held at four different venues with most attendees at the Kaveri hostel. This is when the leftist goons attacked ABVP students, one of the organizers is quoted as, “At around 3 PM, when we were about to start Hawan, a group of Left-backed students came and started protesting. There were members of ISCKON and many other students with us who had come to celebrate Ram Navami. Because of their protest, it was delayed for two hours. They kept saying they could not let Ram Navami be celebrated in the hostel as it was a secular place. We told them if it is a secular place, then Iftar should not happen, and the money spent on it should be used for students’ welfare.”

Also today, a 'divyang' student of JNU, who was returning home after attending #RamNavami celebrations with his classmates, was beaten by the leftists on the JNU campus and his clothes torn.

How much more 'Azadi' do these Leftists want?!!!

The Reality of the Leftists

The leftists portray themselves as the messiah for any oppressed or troubled person. In truth, they exposed themselves when they attacked a Divyang student returning from the controversy of barring non-vegetarian food on campus due to Ram Navami was deliberately stoked to malign those who respect the beliefs and customs of their culture. Those blinded by false secularism and fakeness propagated by the west will never appreciate and respect indigenous knowledge systems. Sadly, this is why our society is in shambles today because we have been told to disconnect from our roots.

JNU is just a symbol of the left’s hypocrisy and hatred. There is a real need to understand that damage is occurring all over India. Our future generations will be victimized by the dirty politics of the Left if we don’t act now. The Ministry of Education has requested a detailed report; let’s hope those responsible face the music.