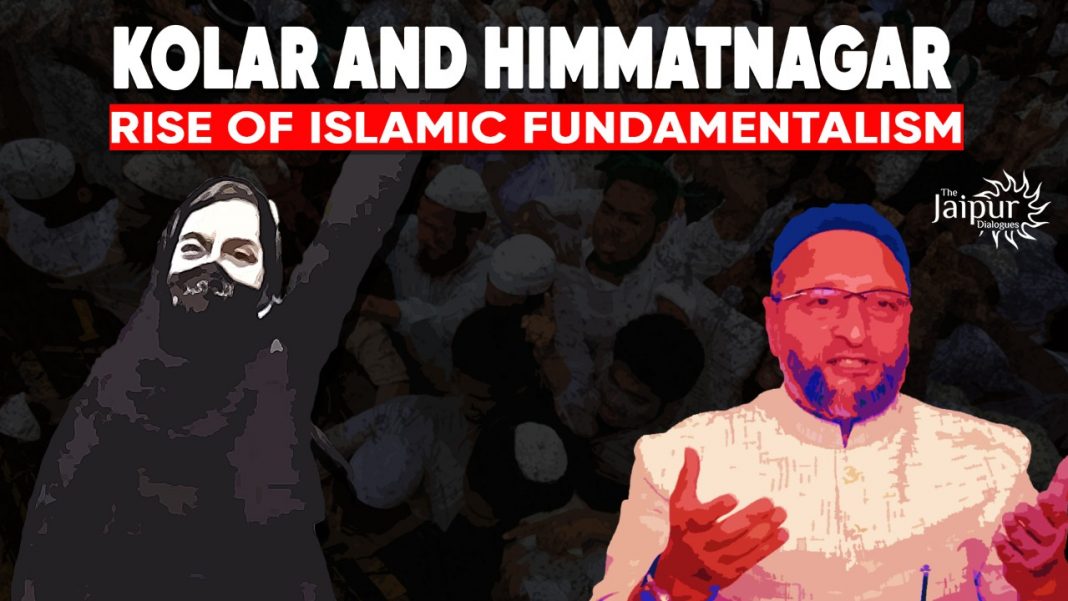 The recent attacks by Muslim mobs across different states during the celebration of Ram Navami, indicates towards their deeper hatred and malice against Hindus. It’s time for Hindus to now unite and rise.

As usual, the peace-loving community or the present-day Kaalnemis have done what they do best. They are masters at inciting communal unrest and violence. Hindus should realize that these repeated attacks on them are part of a larger Islamic conspiracy to finish the Kafirs and form Dar-ul-Islam. The recent attacks by the Islamic fundamentalists in Karauli or Kolar or Himmatnagar points towards one fact, i.e. establishing a Shariah based state.

It shouldn’t be surprising to understand the same pattern of inciting violence across different states in India, be it Rajasthan, Gujarat, a lone wolf attack in U.P. or in Karnataka. Too much protectionism guaranteed to these peacefuls’ in the garb of promoting secularism, has made them cross boundaries of humanity.

In Kolar (Karnataka), they demonstrated their intolerance by attacking a celebratory Shri Ram Shobha Yatra. Stones were thrown at the procession and at Shri Ram’s idol. When the procession traversed Jehangir Mohalla, a frenzied Muslim mob attacked it with stone-pelting and violent attacks. Not only did these violent mobsters attack people, but they also vandalized cars and motorbikes that were a part of the cavalcade.

Hindus were also attacked in Himmatnagar (Gujarat) when they were taking out a procession to celebrate Ram Navami Shobha Yatra. After passing through various areas of the city, the procession was expected to reach Tower Chowk. As the procession passed through the Muslim-dominated area, local Muslims started pelting stones at those in the procession as well as vandalized a few vehicles.

It is important not to forget the attack by an educated yet an eternally ‘Bhatka and Dara hua Musalmaan’  Murtaza at the Goraknath Mandir in Uttar Pradesh. In addition to exhibiting an ideological inclination towards ISIS, the youth harbors a deep hatred for Hindus. Despite his violent ideology and beliefs that resulted in him carrying out a bloody lone wolf attack, he has been depicted as a helpless victim by the leftist media. Hindus, particularly those blinded to the love of secularism, must understand the true motive behind this hidden reality of fundamentalists.

In reality, ‘Ganga Jamuni Tehzeeb‘ is a simple ploy to fool Hindus; the real aim is either to convert them to Islam or to eliminate them. As mentioned in Quran (9:5) “And when the forbidden months have passed, kill the idolaters wherever you find them and take them prisoners, and beleaguer them, and lie in wait for them at every place of ambush. But if

they repent and observe Prayer and pay the Zakat, then leave their way free. Surely, Allah is Most Forgiving, Merciful.” Thus, killing idolaters is a lawful act and one that is encouraged.

Hindus should not take the current attacks lightly and the fact that they are now raising their voices by expressing their identity is a welcome development. Hindus have been accused of being intolerant for a long time, but it needs to stop now. Fundamentalist Islamic groups are actually ‘Humanphobic’ and have ignited violence against the majority by playing the victim card. By causing communal tension, they are inciting Hindus to attack them in revenge. Hindus must consolidate and act in the near future if they want to avoid the violence and hatred unleashed by these fundamentalists in the years to come.