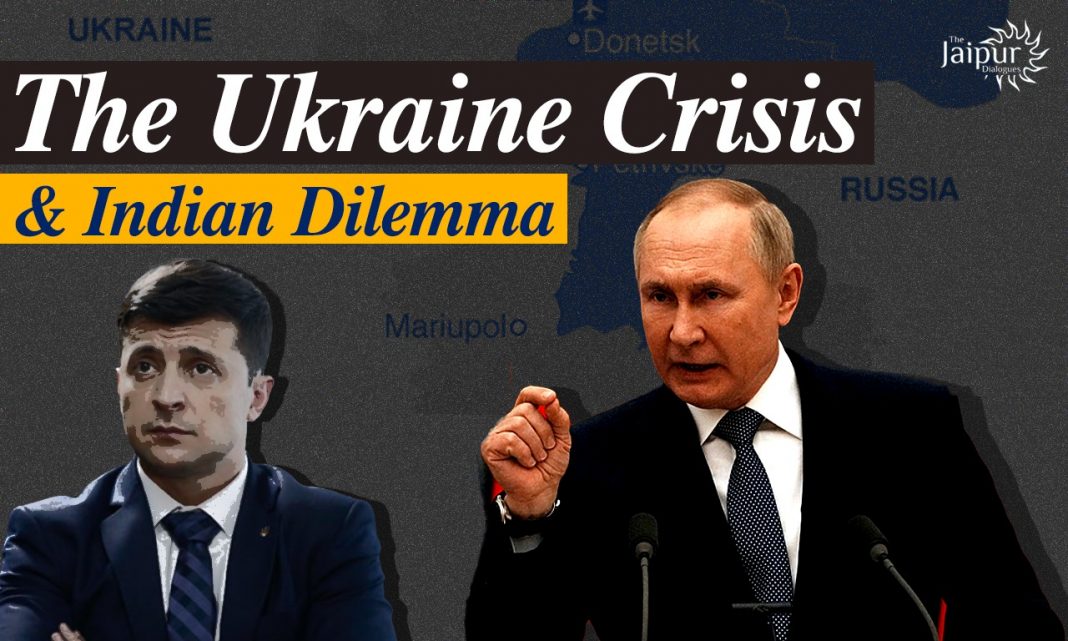 With the Ukraine-Russian crisis deepening and creating a stir on the global platform, we assess what is India’s current status with regards to both its allies, i.e. Russia and the USA.

Eastern Europe has suddenly become an international crisis epicenter. Despite tensions along the Polish-Belarus border (still more of a show of force), the fast-evolving situation between Ukraine and Russia bears all of the warning signs of a major global crisis. In the event of hostilities breaking out, the impact would not just be limited to ground zero, but also be felt across Europe and Asia. We should not forget that Russia straddles both Europe and Asia. While Russia has a vast area of land located in Asia, it is still the largest country in Europe by area. Historically, Russia has viewed itself more as an Asian power than as a European power. A deep look into history would reveal the reasons behind this. As a result of its involvement in both world wars, Russia which later became the USSR, bore the brunt of both economic and human loss. Russia almost single-handedly carried the weight of halting and then repulsing the German Wehrmacht initiated Blitzkrieg, the then considered unstoppable ala’ France, Poland and the Low Countries. These painful historical episodes have rendered Russia paranoid about its peripheral security.

After the collapse of the Soviet Union in 1990, the former Soviet republics gained independence from the Communist state. These newly independent states, however, under the Belavezha Accord, clubbed together as the Commonwealth of Independent States, continued to have a close economic and security relationship with Russia despite gaining independence. As a matter of fact, Russia has been the provider of net security for these countries for many years and still does so, for its erstwhile Central Asian Republics and Byelorussia (Belarus). Ukraine has remained an outlier throughout. The State of Ukraine had witnessed some of the most severe and intense battles of the 2nd World War viz. The Battles’ of Odessa, Kharkov, Kiev, Dnieper, Donetsk and Sevastopol. This was the main battlefield of the Russo-German confrontation or the Hitler-Stalin ego wars. Thousands died, countless were wounded, and millions were displaced. Due to its strategic location, the Crimean Peninsula has been a site of numerous conflicts involving various European powers in the past. Because of these painful episodes, Ukraine has been wary of Russian intentions and considers Russia a potential long-term threat. In order to keep Russia at bay, Ukraine wants to develop security and trade relationships with other European powers. Additionally, Russia covets Ukrainian territory since it is considered to be the Breadbasket of the World.

Ukraine still remembers the Russian annexation of the Crimean Peninsula in 2014, allegedly as a fulfillment of the wishes of the local population. As its name implies, Crimea is now a Russian Protectorate (in name only). Due to this event, and the subsequent trade and economic sanctions imposed by U.S.-led European powers, the fault lines have been widened. Ukraine has accused Russia of fomenting trouble on its Eastern borders, where pro-independence groups supported by Russia have practically seceded from Ukraine. As a result, Ukraine has courted Western powers and is attempting to join NATO. Russian actions are seen as a threat to American interests by the Americans, who continue to carry the baggage of the cold war. Due to Russia’s paranoia about security and the US perception of threat on the Polish-Belarus border as well as Russian activities near the Ukrainian border, this region has become a potential battleground for major military alliances. Russian threats extend not only to Ukraine but also to shut down Europe’s gas supply (Nord Stream), which in turn could spark a major economic and energy crisis.

We need to evaluate India’s position under the above circumstances. Due to its economic and strategic interests, India has maintained successful working relationships with the United States, Russia, and Ukraine. With the rise of China, international security and economic conditions have changed, causing the U.S. and India to come closer and develop strategic and economic ties (Asian-Middle-East Quad). The U.S. has emerged as India’s major partner in trade and defense, and a large Indian Diaspora has established itself in the U.S. and contributed to strengthening Indo-U.S. ties. In light of Chinese actions in the South China Sea, the U.S. has prioritized the entire Indo-Pacific region and is taking steps to check the rise of the Dragon. These actions are in the interest of India. The U.S. and India have signed major strategic pacts viz., the BECA, COMCASA, and LEMOA.

Likewise, India and Russia have a very close and emotional relationship. With the USSR’s aid and assistance, India’s defense forces fought successfully against Pakistan in 1971, leading to a decisive victory. Russians have been liberal in using their veto power to protect Indian interests when the West has been tacitly opposed to them. Even today, Russia continues to be India’s main military supplier. The S-400 ABM systems supplied by Russia have been a game changer in the security scenario of South Asia. Russia, like the United States, has supported India’s core concerns.

In an unfortunate turn of events, a breakdown of hostilities in Ukraine would be a huge diplomatic challenge for India in the light of the above. As far as the economy is concerned, a major energy crisis hitting Europe would roil the World energy markets by pushing up the price of natural gas and crude oil, negatively affecting India; where crude prices are already high. Our target of $1 Trillion exports by 2030 will be negatively impacted by a slowdown in Europe. The imposition of further trade sanctions and economic embargoes on Russia will further complicate the procurement of advanced weapons from that country. While maintaining strategic autonomy will be India’s biggest challenge, it will also significantly reduce the room for maneuvering if a war should break out between the concerned parties. In the event of rapid escalation, India will be forced to take sides as a major power, a situation that it strives to avoid and is certainly not in its interests. Currently, we are enjoying the best of both worlds.

In order to avoid a situation such as the above, India ought to give a boost to the backchannel or Track 2 diplomacy by directly addressing all major stakeholders. India should take action but has not yet. As things appear to be pressing, a neutral and hands-off approach may not be effective. Although major European powers, particularly France and Germany, have taken major steps to prevent armed conflict, we should also support these efforts. It is said that diplomacy has no last word. Therefore, there must be efforts to reach a ‘Modus Vivendi‘ in which the legitimate security concerns of both Russia and Ukraine are substantively addressed. This will ensure that the matter may be resolved. It is vital that our leaders use their good offices to negotiate a meaningful and practical solution with the U.S. and Russia. Meanwhile, let us hope and pray for the best, as an armed conflict is in nobody’s interest.