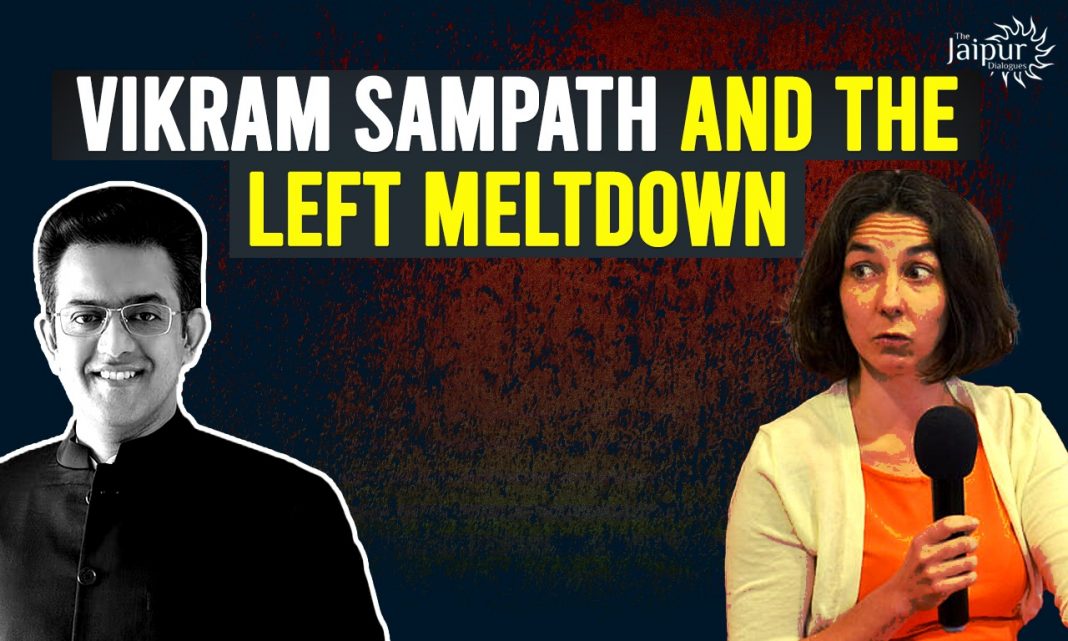 The infamous Leftist cabal across the world is now playing the victim card, causing unnecessary controversies and discrediting all those who don’t tow their line. Left-wing ideologies are based upon falsifying evidence, generating animosity, dividing people, and begging for mercy through the display of false intellectuals and authority figures. It is well known that those on the Left live in an imaginary dystopia, which magnifies the issues which need to be addressed, as opposed to positively correcting them. This is further compounded by the fact that they promote cultural and moral corruption. This attracts young minds away from their roots, leaving society at the end of its tether.

They have sensed that their existence is threatened, so they are raising non-essential issues. Blowing the issue out of context is their USP, not to mention how they ganged up against Bloomsbury in order to withdraw their book on the infamous Delhi riots. They have targeted Vikram Sampath, a learned historian, and a writer, for obvious reasons, and specifically because he does not belong to the Leftist mafia.

What was Vikram’s folly this time? He chose to write a book on V.D. Savarkar. Savarkar was seen as a political pariah by Nehru’s followers. However, when the NDA government came into power and started praising ‘Savarkar’ that is when the actual animosity of Congress came to the fore. The leftist historians and academicians, like Romila Thapar, Irfan Habib, Ram Swarup, Sita Ram Goel, et al, have successfully cornered and vilified the right-wing historians and academicians.

Lately, right-wing historians like Sampath, J Sai Deepak, Sanjeev Sanyal et al have been made targets by the leftist media and the so-called intelligentsia, for obvious reasons. They are not only combating propagandistic leftists, but also countering their agenda with facts and figures for which they have no coherent explanations, so they may be exposed. The coordinated attack this time pertains to a speech Sampath delivered in 2017 at the India Foundation regarding ‘The Revolutionary Leader Vinayak Damodar Savarkar’. In this speech, it is claimed he plagiarized the lecture.

An entire cacophony of accusations erupted when three associate professors teaching History and Communication at three US universities, i.e. Rohit Chopra, Ananya Chakravarty, and the notorious India hater Audrey Truschke complained about Sampath for plagiarism to the Royal Historical Society of the United Kingdom. They have alleged that Sampath of ‘borrowing from essays, lifting sentences without attribution and merely paraphrasing material’ is a fallacy because the needed references are in the index, but in the process of slandering Sampath, it puts their credentials under the spotlight; it is a fact that the left ecosystem worldwide operates in their own citation loop.

There are two parts to this controversy over the libel of Sampath. In the first part, the professors say he never cited Vinayak Chaturvedi and Janaki Bakhale in the speech he gave at the Indian Foundation. The second is more harsh and slanderous in nature, i.e. not citing a thesis by a deceased undergraduate student, Paul Schaffel, from Wesleyan University in 2012. As a result of the blind race of hate leftists, these superficially constructed claims were smashed by Sampath. This is because he unequivocally acknowledged Chaturvedi’s work during the lecture and mentioned it in the articles he published. Dr Bakhle, for whom so many leftist haters are raising fuss and hue, never mentioned plagiarism in her review of Sampath’s work. What an irony!

They allege Vikram inaccurately cited Paul Sachaffel in the bibliography of ‘Savarkar: Echoes from a Forgotten Past’ (Volume I of the Svarakar biography), but he specifically mentioned the work’s authors in the bibliography because he didn’t quote Paul’s text directly but rather drew inspiration from it. Thus, these allegations against Vikram Sampath, don’t hold any ground and rather are a sad reflection of the insecurities harbored by these leftist ‘intellectuals’ against the right-wing intellectuals, as the latter are gaining widespread acceptance and popularity among the masses.

There is nothing novel about the left’s standard modus-operandi, especially when the likes of so-called left-leaning historians, writers, and others have been cornered and this has forced them to maliciously target and address those who don’t abide by their terms and conditions. What is happening today has happened in the past, too. If they don’t succeed in ignoring or demonizing their adversaries, they resort to denigrating and below-the-belt comments and practices. Leftist mafia organizations, who are now attempting to recast SC Bose as a secular icon, conveniently forget that he was once branded “Tojo’s donkey” (People’s War, 19 July 1942) or “Goebbels’ cur” (People’s War, 13 September 1942), by their own tribe. A typical textbook prescribed by leftists has three chapters: the first one is to malign and slander those who oppose them, the second one is to hit below the belt, the third is to shout “victim!”, the fourth one is to call the opposing party racist, communal, and fascist, etc.. Recent “toolkit”  politics are a shining example of this, as was evident during last year’s farmer’s protest.

Globally, the Left ecosystem has been too concerned about protecting their bastions, one of which is theoyal Historical Society. Plagiarism is just a tool, the real issue being ideological conflict: How can a Sanghi or a right-winger break into their elite bastion? Marxists often make bold and unfounded claims, and if anyone asks for proof then they run helter-skelter to find proof and blame the other side. Convenience at its finest. Marxist hypocrisy was highlighted by Prof. Shankar Sharan in his book, Marxism and the Writing of Indian History. A time capsule describing India’s independence history was buried by Indira Gandhi at the Red Fort during her heyday, but in reality, it was nothing more than a ruse highlighting her and her father’s magnanimity. In 1977, when the Janata Party came to power, they dug up the time capsule. The consequences of reconstructing and showing future generations a distorted and falsified history would have been catastrophic.

Just to highlight a classic left response, back in the time a JNU historian S Gopal, who was known to take initiative of this novel idea of introducing the time capsule stated to Prof. Sharan, “It was ridiculous to dig up the time capsule as it was to bury it.”  Adding to this was a typical Marxist double-speak behavior, when he said, “It is tragic that we have replaced a Right-wing fascist dictatorship with a Right-wing communal reactionary government.”. So basically to whom the idea of burying a time-capsule was suggested by Mr. Gopal was a right-wing fascist dictatorship.

The Leftist intellectuals won’t let any outsider break into their close circles, one filled with hate and animosity against anyone and everyone who stands against them. They won’t let the opposing parties publish their books, speak at lit-fests, in short, they try to muffle and suppress the voice of the ‘right’. Times are changing, the new age right-wing academicians and historians are breaking the shackles and are coming forward by using various platforms to voice their opinion and put a spotlight on the lies peddled by the leftist cabal. In the process, they are not only gaining popularity and acceptance but also raising awareness amongst the people, giving nightmares to those operating against the sovereignty and interests of the nation. ‘Bharat’ still awaits its ideological independence today, and the fight for it has only just begun, and the onus lies with us!!