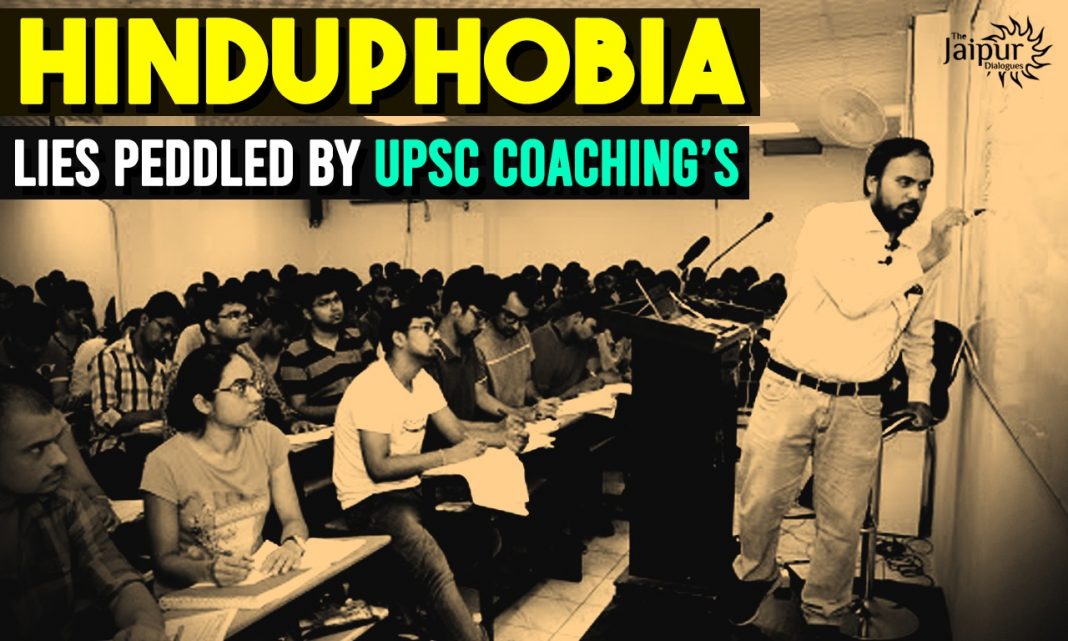 With the hatred and animosity taught and encouraged by various UPSC coaching institutes, it is high time that such anti-India narrative which is being peddled unabashedly be called out.

A self-proclaimed ‘esteemed’ faculty member at a renowned IAS coaching institute in Delhi was recently caught spreading deliberate lies and hatred against Hindus. However, it was not something shocking or out of the blue; Hindu-bashing or the blatant propagation of ‘Hinduphobia’ has been a practice of the elite intellectuals and academicians for decades. Elite intelligentsia and policy-makers are driven by a deep-seated hatred for our country, which in turn provides the impetus for the perpetuation of a flawed leftist ideology and misinformation about secular practices in our country among the masses.

Yogendra Yadav, Irfan Habib, Romila Thapar, et al have successfully set up a virulent attack against the progressive Sanatan Dharma amongst the young students by using academics as a tool to spread misinformation. They used the textbooks to spread mass hatred and create a generation of young people that are filled with hate, anger, misgivings, confusion, and lack of knowledge about their own Dharma. It has been actively promoted not only at school, but even at college and university levels, and thus the JNU students are a shining example for all of us to see. Also, we must not forget the stalwarts like Kanhaiya Kumar, Aishe Ghosh, and Umar Khalid, who have actively promoted peace and unity in India. (Pun intended!)

The UPSC exams, one of the most prestigious exams of the country, have long been a coveted status for Indians; one that not only fulfills the dreams and aspirations of one’s family and relatives but also elevates one’s social standing. As a result, millions of children prepare relentlessly until they pass the test, or else face the wrath of society, but if they pass, then the world will be their oyster. There is far too much significance attached to a particular service, which served society at large and was dubbed as a ‘Steel Framework’ by the great Lt. Shri Sardar Vallabhbhai Patel. There is an unbelievable amount of sacrifice involved in achieving the goal of clearing this exam, no matter what the family background is or how good their family does; it is, to some extent, every Indian parent’s dream to have their child join the coveted services. It is undeniably true that policy formulation and implementation in India would not be possible without the expertise and knowledge of these administrators. As a result of flawed teachings propagated by these coaching institutes who thrive on the trust of these students, many of these students have become carriers of deep-rooted Hindu hatred, thus alienating them from the real world.

One UPSC coaching institute has apologized on behalf of its faculty member who insulted the Bhakti Movement, by terming it as a cult and mocking Hindu practices in subtly negative terms. Her deliberate ignorance backfired this time and was not just denounced by the students, who emphasized her past such peddled lies as well as exposed her deep-seated hatred for Hindus. In the name of education, she has previously ensnared herself in the act of subtle brainwashing. This isn’t the only academy accused of furthering hatred but this exposes the rot of Hinduphobia, which runs deep into the very fabric of India’s IAS education.

Having a working knowledge of the Bhakti Movement is the key to understanding the whole issue. In the Hindu society, the Bhakti Movement was initiated to reform religious practices by promoting devotion to reach salvation as an integral part of the Hindu religion, its origins can be traced back to the 7th century of Southern India, which migrated up into North India and peaked between the 15th and 17th centuries. In order to make the intended message understandable to the masses, local languages were used, as well as the spiritual Gurus preached against the caste system in order to propagate the intended message. Bhagavad Gita, Bhagavad Purana, and Padma Purana are some of the scriptures associated with this movement. Eventually, the movement has had a long-term positive impact on Hindu society, where attaining Moksha was once confined only to the men of Brahmin, Kshatriya and Vaishya castes; now was available to everyone; the Shudras, as well as the women folk, had been given a path to spiritual salvation.

People should understand that the Varna system in India was never decided by birth into one family, but was fluid; therefore, one could easily change their Jati and Varna according to their Karmas. This was mentioned emphatically in Ch.4, Verse 13 of the Shrimad Bhagwat Geeta, “चातुर्वर्ण्यंमया सृष्टंगुणकमववर्भागश: | तस्य कतावरमवि मां वर्द्ध्यकतावरमव्ययम्||”. This means all the Varnas are merit-based. There is also a reference in Mahabharat where Yudhishtir says, Varna is based on your character, with change in your character you can change your Varna. In Bhagwat Puran 7.1.1, it is stated that- Varna is based on your Karma or your merit and abilities and not on your birth. In Rigveda, 10.90, the Purush Sukta states that there’s Purush (meaning Parmatma) in each one of us. As late as the Satavahana rulers, born into a Shudra family, who were later proclaimed Brahmins for their merit, there was fluidity and ease of movement within Varnas.

In the case of our seeking outer validation, which has unfortunately become embedded in our consciousness, there are proofs from foreign scholars like Megasthenes and even later travelers like Hieun Tsang who said that there was no rigid Varna system in India. Establishing a rigid caste system was a dirty trick played by the European rulers. This was to further their own greed and vicious agenda of looting India and dividing it into fragments. As part of their deliberate attempt to destabilize the establishment of our cultural unity and synthesis, they equated Varna and caste. In the ancient Hindu society, Varna was based on one’s choice of occupation. The mobility pattern was flexible and the individual had an opportunity to improve upon his/her status as skills and abilities increased. On the other hand, the latter was a foreign concept, depending on the type of family one was born into. It was based on rigid principles and restricted mobility in society, similar to the feudal lord and slave system of the West. Therefore, this showed that the caste system was an intentional intrusion on our socially integrated society. This was far more progressive than that of the west. This is because equality can never be guaranteed in any society, but a chance to improve on it is a sign of a progressive one.

The Bhakti movement is not a cult. Those who define it as such are relying upon their half-baked knowledge, not realizing that the word ‘cult’ is automatically associated with a negative connotation.  As per vocabulary.com, A cult is group of people defined by a “religious” devotion to something — often a self-appointed leader. Most people view cults as strange and frightening, mostly because cults have, over the years, done some strange and frightening things, including murders and mass suicides. A valid question arises, how does the Sanatan Dharma measure up to being a cult, by this standard? It was the Sanatan Dharma that originated free thinking, expression, and free speech, which became restrictive due to the continuous onslaught of the Abrahamic religions, so how can comparing it to Islam not be absurd?

It is highly unfortunate that the ‘esteemed’ institute and its highly ‘intelligent’ faculty blatantly spread lies by proclaiming that Hindus formed the Bhakti Cult because Islam had entered India and it promoted equality and was very liberal. This is nothing but a big joke. Whatever is happening against women in Pakistan or to women under ISIS or Taliban rule in no way reflects the spirit of a religion that promotes liberalism and equality. Providing students with this deliberate distortion of facts to suit her own secular greed and boost her false credentials does not reflect well on her intentions. This implies that she is perpetuating a myopic view of Hinduism. The subtle way of glorifying Islamic practices by highlighting deliberately misunderstood aspects of Hinduism is not new, but this underlying messaging contributes to creating negative images of Hinduism among students with deeply ingrained prejudice against their own culture.

In fact, this was not the first time the faculty member had propagated lies about Hindu practices. She had raised doubts about the Hindu family system, by saying that bride purchasing is a common practice in Punjab and Haryana’s rural communities. This, in itself, raises a question, namely, why wasn’t the issue of polyandry in Islam mentioned? She has cleverly masked her animosity for Hindu customs and beliefs by claiming that distributing gifts on Diwali is an Abrahamic tradition and that our belief in Karmic theory is all hogwash by directly taking a jibe at PM Modi for coining the term ‘Divyang’, for the specially-abled. This isn’t a one-off incident but is the result of the systematic hatred promoted since decades by the leftist syndicate and is now for all to see.

These coaching institutes engage in creating hype for leftist-liberal education, however, in the process of profiteering, they are damaging the psyche of the students, as well as resulting in a generation of students separate from their roots. The situation doesn’t bode well for India, which has already faced attacks of all kinds from all over the world. These attacks are aimed at destroying both our Sanatan Dharma and our resources by acting in accordance with their own interests. The “Steel Framework” of our country, which was meant to provide strength to our nation, shouldn’t rust due to the greed of a few. A few enlightened and active citizens and officers are now bringing about the necessary change. This is a welcome step, but there are still many miles to go before this rot is exterminated. It is also the responsibility of the students to strengthen their own value systems and stand up for their rights. They will have to know about their own Dharma and not let themselves be influenced by those engaged in dubious acts against Hindus and Hinduism.