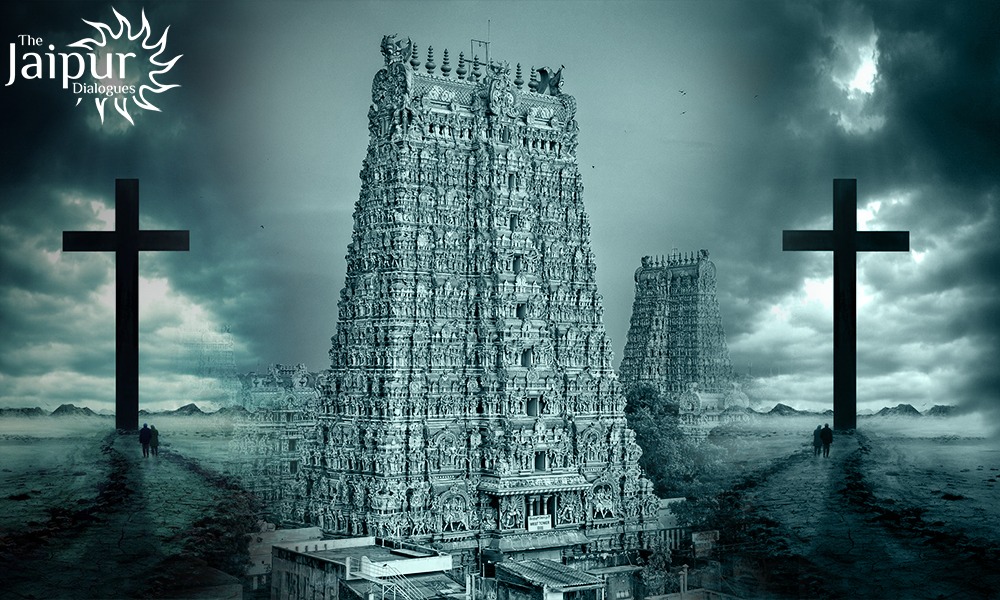 According to the tradition of Saint Thomas Syrian Christians of Kerala, Christianity was introduced to India by Thomas the Apostle, who is said to have reached the Malabar Coast of Kerala in 52 AD. But, the hold of Christianity got strengthened by the arrival of the Portuguese on Indian shores. After capturing Goa, they did widespread destruction of the Hindu temples and converted most of them into churches. This was followed by forcible religious conversion of the Hindu public into Christianity. In its initial years, the British East India company was mainly focused on increasing their political presence in India. Once they got settled, they started playing with the social fabric of this country. Under colonialism, the Indian religion clashed directly with British Christianity. The Britishers considered that it was their duty to civilise the ‘uncivilsed’ India for lightening the white man’s burden. The Charter Act of 1813 granted permission to the missionaries to come to India and engage in religious proselytization. The Macaulay’s minute of 1835 followed by the Wood’s despatch of 1854 provided for the establishment of English education system in India.

The traditional gurukuls were replaced by the lofty universities. The missionaries kept doing their conversion activities in the tribal areas in the name of humanitarian aid. It was unfortunate that religious conversion never became a major talking point during the Indian National Movement.

Most of the damage was already done by the missionaries in the tribal areas of the North East, Bihar, Madhya Pradesh and Odisha. They were also successful in their project in various pockets of southern India. As per the the 1951 census, 2.3 per cent of the Indian population were Christians. It is strange to know that they still make about 2.3 per cent of the population as per the latest census. This is not as plain as it looks. In India, only the Scheduled Caste Hindus can get the benefit of reservation. So, if a SC Hindu gets converted to Christianity then he would get debarred from the reservation benefits. For this very reason, the new converts are advised by the church to keep their old Hindu identity entact. In this way, Christianity is attacking on the consciousness of the Indian masses. Whenever questions are being raised, they show their standstill rate of growth to save themselves. But, if one tries to analyse the society deeply then the consequences of this could be seen.

Over the years, one can clearly see the changing social fabric of Kerala and Tamil Nadu. As per the official records, Christians make about 18 per cent of the population in Kerala against 6 per cent in Tamil Nadu. It is noteworthy that about 10 per cent of Kerala’s population falls under the ‘scheduled caste’ column. This number increases for Tamil Nadu where 20 per cent of the population is Scheduled Caste. This is where one can understand the real game. One can find churches at every nook and corner of these states which doesn’t complement the statistics shown by the census. The political and cultural sphere of Kerala is dominated by the Christians. The Islamo-Xtian nexus has cleverly ‘secularised’ the Hindu festival of Onam but the Hindus of Kerala seems to be unaware of the dangers staring at them.

In the 1971 census, 4.93 per cent of the undivided Andhra Pradesh was Christian. This figure dropped to 1.68 per cent in 2011. The decline of Christianity is matched by a corresponding rise in the share of Scheduled Castes which is 16.4 per cent of the population of undivided Andhra Pradesh. As per the official records of the state, Jagan Mohan Reddy government had provided monetary relief to 33,803 temple priests, 29,841 Christian pastors and 13,646 imams in the state. This huge number of pastors doesn’t matches the small Christian presence in Andhra as per the census data. What Andhra observing is a state sponsored Christianization supported by Jagan Mohan Reddy who himself is a Christian like his father.

The North East & other tribal pockets

Christianity is the majority religion in four of the north eastern states with a significant presence of 41.29 per cent in Manipur. In 1951, the population of Manipur consisted of 12 per cent Christians which further increased to 41.29 per cent in 2011. There has been a similar story for the other states of this region. Congress, especially the Sonia Gandhi era facilitated the arrival of Christian missionaries and took no serious steps for the prevention of foreign funding for these activities. Similar increase of Christianity has been observed in the Santhal Pargana region of Jharkhand where the tribals are leaving their traditional rituals for Christianity. Districts of Odisha and Chhatisgarh too have reported an increase in the Christian population.

The statement of a YSRCP MP went viral when he told that the actual percentage of Christians in Andhra Pradesh could be about 25 per cent of the population. This is backed by growing religious intolerance in Andhra where regular attacks on Hindu temples has now become a norm. If not controlled, this could soon become the scenario of many other states. Government needs to bring strict regulations on foreign funding and illegal land grabbing. A strict anti conversion legislation too is the need of the hour. Civil society too needs to become active for reporting these activities or the Hindus will keep losing ground in multiple parts of their nation.