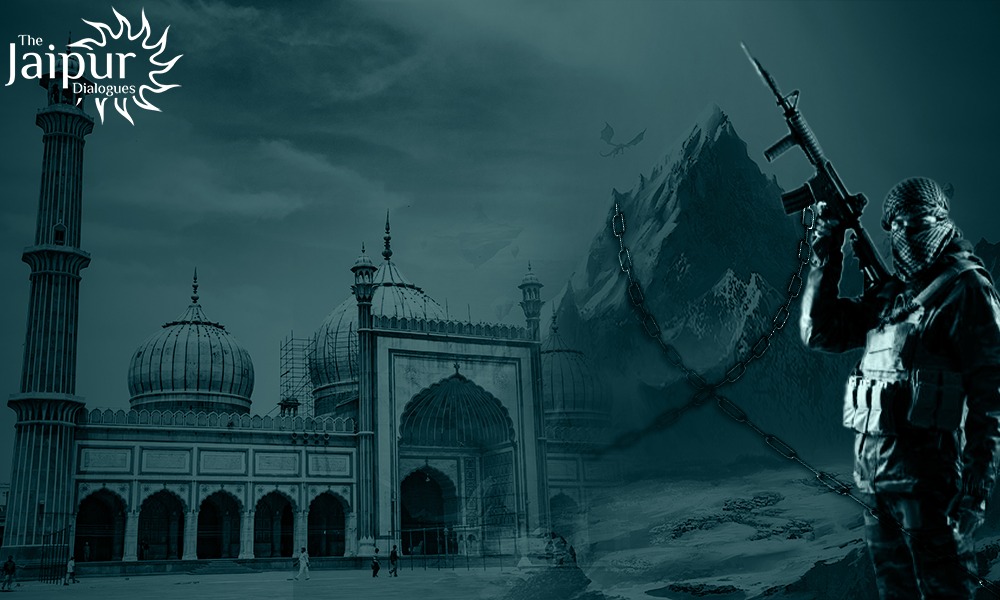 The place which once hosted the Buddhist and Hindu philosophies became a dreaded desert since the arrival of Islam. One can read the 12th century Rajtarangini of Kalhana to know about the civilisational beauty of Kashmir which was later hijacked by the Jihadi forces. Kashmir was attacked by many Muslim invaders but the grip of Islam got strengthened by the preachings of the Sufi saints. Sheikh Noor-ud-Din Noorani, also known as Nund Rishi was a Kashmiri sufi saint and Islamic preacher who founded the Rishi order, a Sufi tradition of the region. The sufi saints of Rishi order influenced Kashmir and its culture during the medieval times. These sufi saints were prolific to spread Islam in the valley through their moderate sufi ideologies. But, Islam can never be moderate in reality. The Islamic rulers and invaders of Kashmir were bigots who killed Hindus and destroyed their temples on a large scale. The destruction of the Martand Sun Temple by the orders of Sikandar Shah Miri is one such example. The population of Kashmir too got radicalized and the place became a lost home for the Indic religions.

When India took its Independence from the British, Kashmir was given an option to decide its future. Maharaja Hari Singh, the ruler of the princely state of Jammu and Kashmir, decided to remain an independent identity. Pakistan could not digest this because according to their Islamic logic, they should be the owner of a Muslim majority state of Jammu and Kashmir. For converting this dream into reality, Pakistanis attacked the state in the month of October in 1947. Pashtun militia backed by the Pakistani army were marching towards Srinagar when Maharaja Hari Singh approached the Indian government for military help. India couldn’t provide military help to a territory which was not the part of the country. So, Maharaja Hari Singh signed the papers of instrument of accession to make Jammu and Kashmir a inalienable part of the Indian nation. India went into the war and forced the Pakistani backed militants to retreat.

But, then Jawaharlal Nehru, the first Prime Minister of India did a historical mistake of taking the Kashmir issue to the United Nations which resulted into a ceasefire, dividing Jammu and Kashmir into two parts. Pakistan occupied a significant chunk of territory which India call as Pakistan Occupied Kashmir (POK). Sardar Vallabhbhai Patel, who was responsible for uniting more than 560 princely states was not given an opportunity to handle the Kashmir issue.

In 1949, Sheikh Abdullah and company started negotiations with New Delhi for a special status of Jammu and Kashmir. Jawaharlal Nehru, a friend of Abdullah was always soft on these inappropriate aspirations. Finally, the Indian state conceded infront of these Islamic demands and Article 370 & 35A were added in the Indian constitution. These articles helped in the creation of an Islamic state with an Indian state. Except for defence, foreign affairs and communications, the state legislature of Jammu and Kashmir was independent to take any appropriate or inappropriate decisions. Other constitutional powers of the Central Government could be extended to the State only with the concurrence of the State Government. The state had a seperate flag, a seperate constitution and a seperate penal
code.

With the help of Kashmiri leaders, the Pakistani state started insurgency in Kashmir. Mufti Mohammad Sayeed took oath as the first Muslim Home Minister of India on 2nd December 1989. His daughter Rubaiya Sayeed was kidnapped on 9th December 1989 by the members of the Jammu Kashmir Liberation Front, a militant separatist organization. The kidnappers demanded the release of thirteen of their members in exchange for Rubaiya’s release. The Chief Minister Farooq Abdullah in agreement with the Central government accepted their demands and freed five of the jailed militants. On 19th January 1990, the Kashmiri Hindus were hounded out of their places to live the life of a refugee in their own country. There was a big nexus of politicians like Mufti Mohammad Sayeed and the Islamic groups. Numerous Islamist groups were formed who emerged advocating Nizam-e-Mustafa (Rule of Muhammad) as the objective for their struggle. Militant groups like Hizbul mujahideen and Jamaat-e-Islami asserted that struggle of Kashmir will continue till Islamic Caliphate is achieved in Kashmir. Under this same project, Kashmiri pandits were forcibly expelled from their homeland. “Tera mera rishta kya, La Ilaha Illallah” like slogans were prominent on the streets of Kashmir. Non Muslims were called aggressors by the Islamist groups for not accepting Islam. The Indian government remained silent and did nothing to save the non Muslims from the atrocities of the Jihadi groups.

On 5th August 2019, Home Minister Amit Shah announced in the Rajya Sabha that Article 370 and 35A would be abrogated. The new provision also provided for the bifurcation of the state into two union territories of Ladakh and Jammu & Kashmir. The government kept telling that this will bring a new dawn of development and growth in Kashmir which would be free from terrorism. But, inspite of the new legislations, the BJP led government kept talking with the same old separatist leaders. No efforts were made for changing the political structure of the new union territory. The same group of divisive leaders are still the face of whole J&K. Jammu, a Hindu majority region was not empowered to increase its representation in the political sphere. It seems that those leaders are still dictating their terms and blackmailing New Delhi for their great agenda.

Even after the abrogation of those articles, Kashmir is still regularly witnessing the killing of political leaders and civilian population by Islamic terrorists. According to the government data, militancy in Jammu and Kashmir has claimed a total of 41,000 lives in the past 27 years. There is no such district of which a soldier has not been martyred in the war of Kashmir. The Indian state is not willing to accept the real problem which lies in Kashmir. For looking ultra secular, the government is not ready to take those steps which should have followed the abrogation of 370 & 35A. This is the chance when India has to show its grit for transferring a peaceful Kashmir to her future generations.