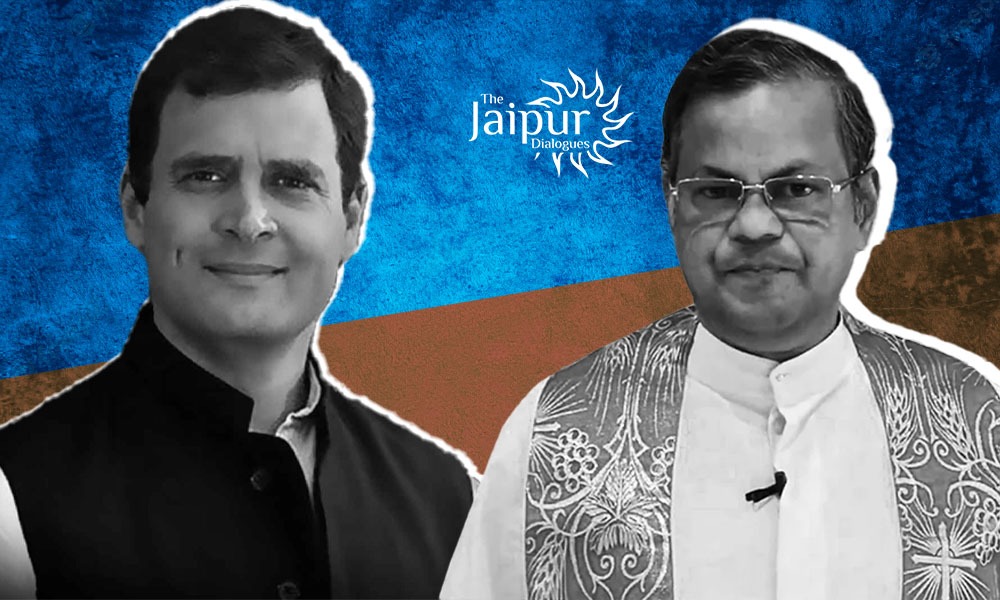 Anything anti-Hindu associated with the Gandhi clan is neither new nor uncommon. Honestly, the entire nation will be shocked if they do anything for Hindus since the ‘Christian-Muslim-Parsi-Janaudhari Brahmin’ belongs to the confused clan. During RaGa’s Bharat Jodo Yatra, he recently met Hindu-hating pastor George Ponnaiah, who is vitriolic and fanatic.

A widely circulated video shows Rahul Gandhi interacting with a pastor in which he seeks to learn about Jesus Christ. “But He is not God? Or is he God? Jesus is also God?” Another man there then explained the same concept with the analogy of water. He said “It is Like water, which is in 3 states – solid, liquid and gaseous form.” The person then explained that Jesus Christ is both God and God’s son. As a result, one wonders, how can one be both god and his son, at the same time? Nonetheless, Rahul Gandhi asked “So, Jesus Christ is a form of God?”

This is when the Hindu-hating Christian pastor interjected, making an unnecessary and ridiculous comment. This is an example of the inferiority complex and ideological confusion that afflicts these Abrahamics. George added, ‘Jesus is the real god, unlike Shakti and other Hindu Gods’. He ranted “He (Jesus Christ) is a real God, revealed as a human person. Not like Sakthi and all.”

However, Mr. Gandhi did not oppose the offensive statement passed by George P. This shows the true face of Rahul Gandhi and the dangerous ideology that he represents.

In his hate-filled speeches, Mr. George has unnecessarily dragged our sacred symbols and spewed venom against Sanatan Dharma. In his speech at Kanyakumari last year, he claimed that Bharat Mata causes scabies and is dirty. MR Gandhi was ridiculed by him for not wearing shoes out of respect for Bharat Mata.

He audaciously declared, “But we wear shoes. Why? Because the impurities of Bharat Mata should not contaminate us. The Tamil Nadu government has given us free footwear. This bhuma devi is dangerous, you could catch scabies from it”.

He issued threats to the Hindus of Tamil Nadu, just like his Abrahamic Islamic counterparts. He brazenly threatened Hindus in his speech, “We are now the majority (in the Kanyakumari district) from 42 per cent we have crossed 62 per cent. Soon we would be 70 per cent. You cannot stop us. I am saying this as a warning to my Hindu brothers.”

The credentials and past of George Ponnaiah have been tainted by some objectionable activities and remarks. Clearly, these pastors harbor nothing but hatred for their people and land. Hindus need to recognize the real face behind this phony secularism and ‘joy-peace for all’ façade. There is no doubt that the Abrahamics are working zealously to achieve their agenda, whether they are Christians or Muslims. The pastor’s threats and abuse of our holy symbols show his true colors and the values these missionaries adhere to. Hate-mongers should not be allowed to roam freely, as they pose a danger to our integrity and national security. In the name of secularism, immense damage has already been done, yet Hindus refuse to wake up to reality. Several states, including Andhra Pradesh, Jharkhand, Punjab, etc., are on the path to becoming a Christian majority, and this should serve as a warning for all.