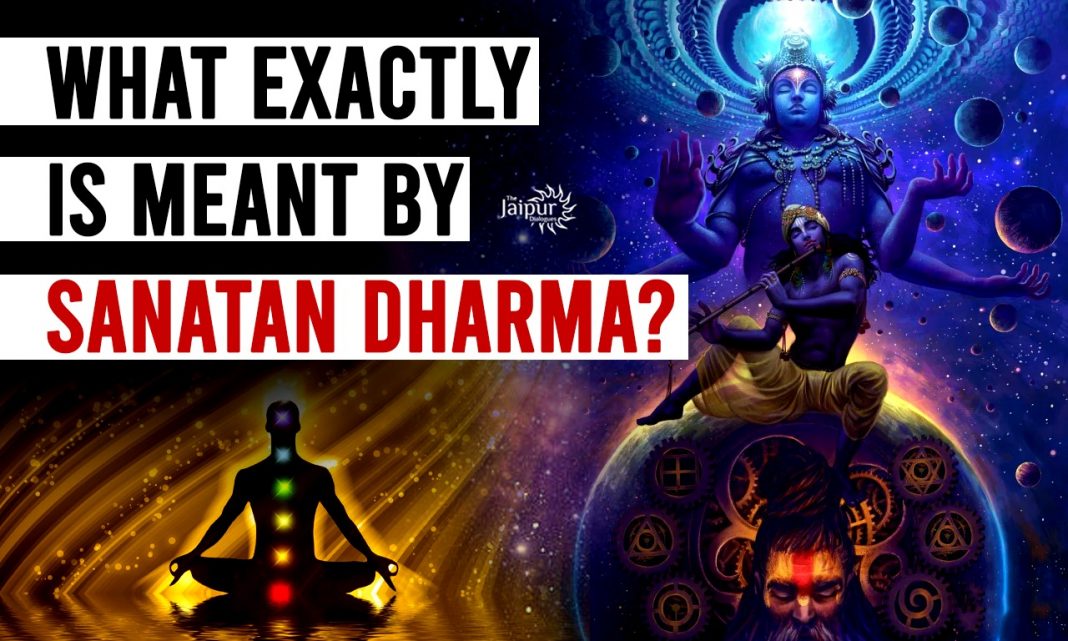 A lot of times Hinduism and Sanatana are used interchangeably, so do they mean the same or is there any difference? What exactly is the essence of Sanatana? It’s imperative for people to understand the same.

The words Hindu and Sanatani are often used interchangeably in the current context. But where does the term Hindu come from? Many people disagree with the connotation of Hinduism for Sanatana. Are they really distinct or do they mean the same thing?

“Hindu” was the name given by the ancient Persians to the people who lived along the Sindhu riverbank. The word ‘Hindu’ was used instead of ‘Sindhu’ because in their language they did not have the syllable ‘Sa’. Due to the colonial influence of the British, the Hindu religion became known as Hinduism. It is popularly referred to in that way, whereas Hinduism’s true identity is Sanatana Dharma. However, what is Sanatana Dharma? Sanatana means ‘forever or eternal’ and Dharma means ‘duty’. In today’s context, that’s true since Sanatana has been carrying on for eternity, and no one knows when it started.

Sanatana or Hinduism as we call it today was never a religion or sect, unlike Abrahamic faiths. A Sanatana practice is a way of life, one that is in harmony with nature and its sensibilities.

Sanatana is a holistic outlook on life, embodied in positive moral actions. In other religious sects, people are obligated to follow a single figure as God and to follow their teachings. According to Hinduism, there is no one entity or book which serves as the foundation of humanity.

The essence of Sanatana Dharma

According to Sanatana Dharma, all creations of nature, and all deities share the responsibility of pursuing the eternal duty. Dharma refers to moral and spiritual principles that guide one’s conduct on this planet and determine one’s religious duties. Dharma means safeguarding the world order through upholding moral codes of conduct. Religious beliefs act as guides to this end. Presently, however, Dharma is seen as more of a religious notion than one of duty. Every object created by God performs a specific role in God’s manifested universe, which is the beauty of Sanatana Dharma. Therefore, every being is bound by duty, a duty shared by all creatures.

Thus, anyone who contributes to the welfare of God’s creation and the continuity of the Universe automatically becomes a Sanatani. Any being that performs and shares in the eternal and continuous duties of the creator, by adhering to it, is fundamentally a Hindu. As a result, one does not become a Hindu by birth, but by action or Karmas. In Hinduism, we rarely hear of forced conversions as we do in Christianity or Islam. The recent spate of attacks perpetrated by those of Abrahamic faiths threatens the very existence of Hindus and their beliefs. Sanatanis don’t forcefully increase their number of followers or believers, despite facing attacks from all directions. All are Sanatani, regardless of whether they do good or bad. The only differentiation in Sanatana is the way each performs their assigned duties. This distinction corresponds to the Satkarm (righteous deeds/karmas) and the Dushkarm (evil deeds/karmas). As a result, the ultimate decision is who should be punished or rewarded.

The notion of religious superiority is, in all honesty, is an elaborate hoax. It’s the fulfillment of one’s duties and the ongoing quest to improve oneself which is the essence of Sanatana. All emphasis is placed on achieving spiritual salvation, which is attained gradually by performing virtuous and selfless deeds. Every creature in Sanatana is duty-bound, whether it’s an earthworm that plows the ground naturally or an oxygen-producing tree. Regardless of how small or insignificant one may seem, they are all part of the continuity of the predestined order.

What does it mean to be a Sanatani

To be clear, being a Sanatani does not imply being defenseless, weak, or meek. We should embrace others as part of oneness per our teachings; however, if they take our willingness and love as a weakness, then we should not remain silent. Throughout history, the valor of male or female warriors has been emphasized in our sacred texts on many occasions. We all know that Bhagwan Ram gave Ravana an opportunity to repent, but because he refused to do so, he was killed by Bhagwan Ram. Bhagwan Krishna, too, was instrumental in helping defeat the Kauravas, who had crossed all lines of humanity, decency, and sanity. Being a ‘Sanatani’ doesn’t mean weak, but rather strong, capable, compassionate, progressive, and determined.

All those who believe in religious superiority will never understand the true beauty of Sanatana. In reality, even the haters and dissenters, too are Sanatanis for they too are playing their designated role. A balance of good and evil is always needed to continue the ‘Kaal-chakra’ as designated. Hence, the world in its purest form is entirely based on Sanatana values and principles, irrespective of one’s faiths/beliefs.