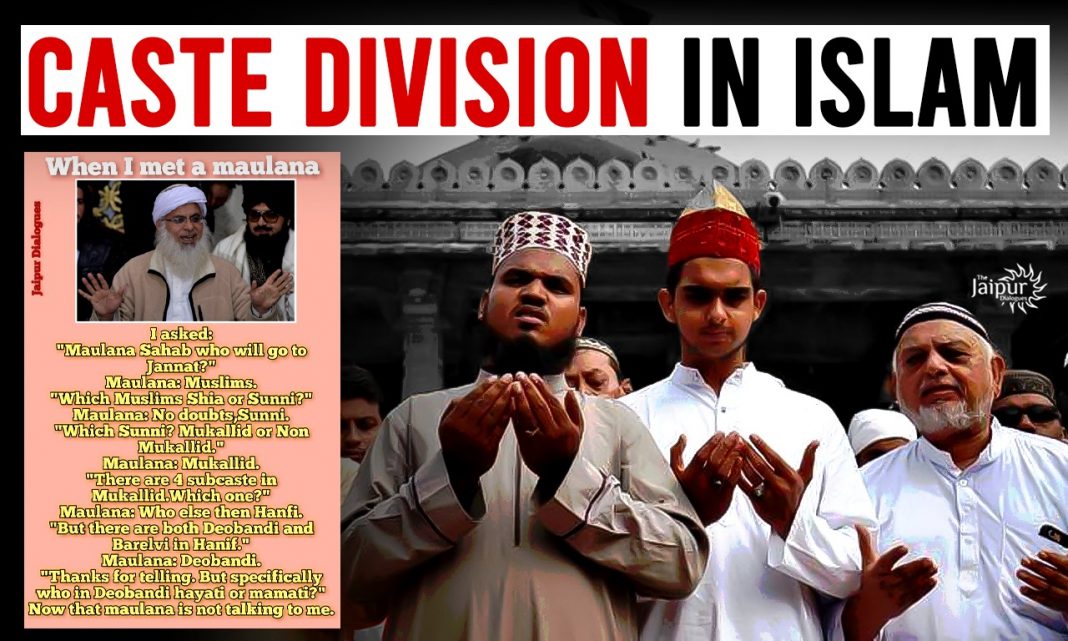 The Islamic society is riddled with caste-based divisions, which have severe ramifications for the entire Muslim community. For long the selected elite of the community have mistreated and used the weaker Muslims as a pawn in their game of hatred against non-Muslims.

Hindus have been criticized for practicing caste even though the British originally distorted the system. By twisting facts, the British propagated Christian conversion in India by exploiting the caste system. In ancient India, castes were flexible, based mainly on Karma rather than birth. As a result of colonial rule, Varnashram became rigid and adulterated. Hindus have been plagued by the adulterated caste system, which made them vulnerable to vicious attacks. People have conveniently avoided addressing the caste problems plaguing other religions, which is surprising.

When it comes to Muslims, it is divided into two groups, the Ashrafs, and the Ajlafs. Ashrafs are descended from either Arabs or other invaders. Local converts were called Ajlaf. Though the Qur’an doesn’t mention the division amongst these groups. The terminology developed after the subsequent Islamic invasions. Additionally, they forcefully converted local Hindus when they invaded and conquered parts of Indian land. But now comes the most fascinating part. A religion that identifies self in absolute difference from Hinduism, embraced caste-based differences with open arms.

Prophet Muhammad’s grandson was Husain. In comparison, the descendants of Hasan Ibn Ali (brother of Husayn) are called Shareefs. In Islamic society, these two communities are largely at the top of the social hierarchy and hold considerable influence. It is believed that many of them are the offspring of brothers who share the same bloodline. Muslim societies are characterized by close-relative marriages, which are accepted as a norm.

The Pasmandas, who belong to the Ajlaf category, are at the bottom of the Muslim society. Among them are Shudras and Adivasis who converted. Pasmandas are a highly discriminated group within the Indian Muslim community. Pasmanda is the Persian word for ‘those who have fallen behind’.

The Pasmandas are a highly discriminated group among the Indian Muslims. That’s strange because they comprise nearly 85% of the entire Indian Muslim population. The Pasmanda Muslims are the least represented group within the Indian political sphere. Upper-caste Sharifs have always marginalized Pasmandas. A prominent writer Ajaz Ashrah noted that separate ‘lotas’ were designated for drinking water. They were intended for the Dalit Halalkhors (sweepers) and Mehtars in the Muslim-dominated regions. Clearly, there was discrimination in mosques as well. The upper caste Muslims prayed in the front rows, while the lower caste Muslims prayed in the back rows. Some places continue to discriminate even after death since Dalit Muslims cannot access burial grounds exclusively for Ashrafs. Whereas in Hinduism, everyone is accorded a respectable cremation, because in Sanatan everyone is equal in the eyes of God.

Muslims also practice such cruel discrimination when it comes to the ‘Caliphate’. Only someone belonging to the tribe of the Quraysh (Mohammed’s tribe) can be the caliph, according to the Hadith.

Hence, this raises a sharp paradox for those believing that there exists ‘equality between believers’ as per Islamic beliefs. During any riots or violence that are incited by Maulanas or Mullahs, it is usually the Ajlafs who fight on the streets. The Ashrafs use Ajlafs to propagate their hatred against non-believers, all this while the former stay well protected. Do you ever see Maulanas fighting on the street? In addition to brainwashing Muslims and instilling hatred in them, they do nothing positive.

Caste discrimination amongst Muslims exists in Southern India. In Kerala, Ossan (barber) and Pusalan (fishermen) are regarded as the lower strata of Kerala Muslims. The discrimination had a direct link to their work and low financial status.[i] If any section of Kerala Muslims can be labeled as upper caste, they are the ‘Thangals’, who claim to be the Prophet’s direct descendants. “The Thangals never marry outside their community irrespective of the financial status of the groom/brides,” said social critic Hameed Chendamangallur.

Danish Azad Ansari has been made a minister in the Yogi, a minister from the Ajlaf community. It upset the Ashraf community, who couldn’t fathom the rise of a member of the lower strata of society. As of now, Pasmanda leaders, like Faiyaz Ahmad Fyzie, are highlighting the ills propagated by the Ashrafs.

In terms of modern history, Dr. Ambedkar noted that he did not share today’s much-hyped love of Islam. Their society was riven by excessively rampant caste-ridden divisions. He said, “The Muslims do not realize that these are evils and consequently do not agitate for their removal. Indeed, they oppose any change in their existing practices”. (Ref: Pakistan or the Partition of India, pp. 218-223). His decision to convert to Buddhism was largely dictated by the feelings of equality that Buddhism provided.

By using the Ajlafs to accomplish their hateful and vicious agendas, the Ashrafs have used the former as foot soldiers. In the absence of adequate political representation, they have experienced rampant discrimination. Muslims who are unfairly treated need to speak out against the injustice they have been subjected to. Any call for justice for Muslims is unheard of and therefore ignored by the upper-caste Muslims. Sadly, a small group of powerful and elite Muslims controls the entire narrative to harm others. Despite 75 years of independence, caste-based discrimination continues to affect Muslims. Islam is afflicted with caste-based discrimination, which needs to be rectified promptly. A society that is inclusive and holistic needs to treat everyone equally. A large population of Muslims being controlled by those small minority of Muslims, who have vicious, hate-driven propaganda, under the garb of Islamic unity, doesn’t bode well for democracy.