The Sahebs Who Never Left- Liberal Meltdown of the Print 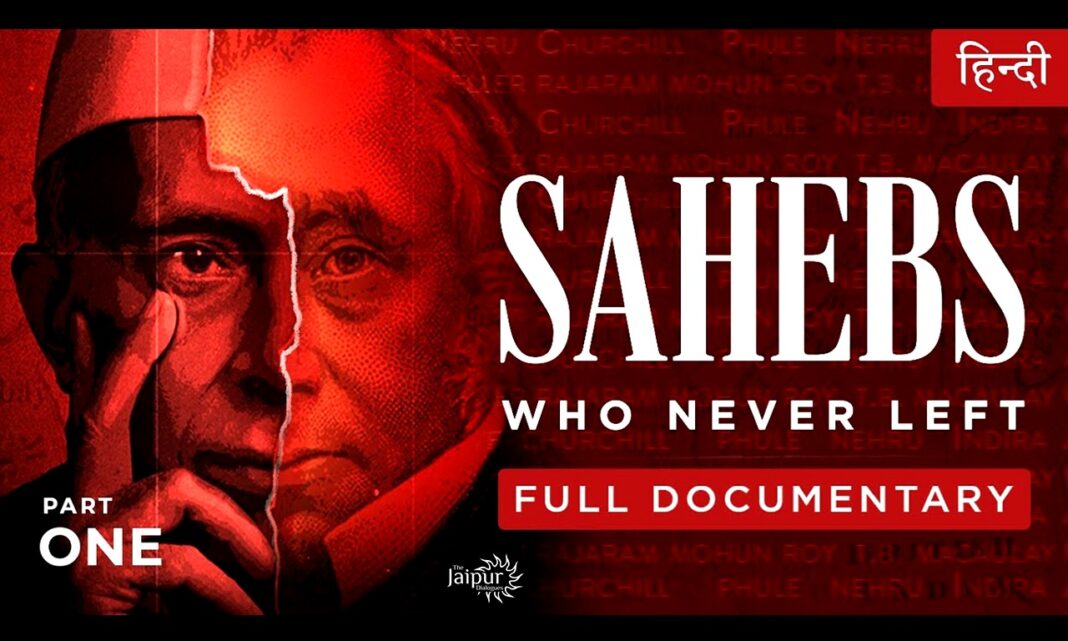 There’s more to ‘Sahebs Who Never Left’ than it being a mere docufilm. It’s the beginning of a powerful Indian revolution. Clearly, there has been a revolution that has startled and baffled the left, and ‘The Print’ article proves it. The film, which is part of a two-part series, shows the brutal reality of the British colonial empire. It depicts how Western powers created a subverted system to dismantle the rich ‘Bharatiya Sanskriti’. As the people of India, especially Hindus, gain insights and realize how they have been cheated, looted, and taken for granted in the name of secularism… It is clear that pseudo-secularists have been rattled by this.

The ‘so-called’ intellectuals, leftists, and secularists who believe they are responsible for spreading freedom of thought and decolonizing minds are themselves trapped in Ideological Subversion.

It is interesting to wonder what bothers or startles so many when talking about ideological subversion, a tool that Yuri Bezmenov described in detail. Ideological subversion wasn’t just a term. However, if one watches the documentary, one can understand how it was used as a tool by the Western powers not only against India but other nations too.

“The title of the film is introduced as black and white photographs of many ‘Sahebs’ emerge on the screen. But it is difficult to deduce the connotation behind the ‘brown saheb’. Is it the colour of one’s skin, gender, or ideology that defines them? Director Praveen Chaturvedi, too, seems to be unsure.”

It appears that the writer is perplexed by the above-mentioned statement. As a matter of fact, just to clear the air, director Praveen Chaturvedi was not uncertain about anything. It’s interesting to note in what way the writer associates Brown color of Sahebs with gender or ideology? However, when searching the internet, one can find the following results. ‘Brownism’ is a political theory associated with the political leader Gordon Brown of the UK and those who follow Brown. Brown as a color has been associated with Nazism because of the Sturmabteilung, whose members were referred to as brownshirts. By reviewing this, one can easily see that no such reference or indication was highlighted in the movie. It is perfectly natural and appropriate to link brown color with Indian skin tone without being racist. What are the problems associated with being Brown or being addressed as such?

“You won’t know about this history of India,” reads the title on YouTube, where the first part is available. It implies that there are many versions of history. Intentionally or not, perhaps Chaturvedi is telling us that he too is trying to build his own.”

Again, the writer is trying to create a narrative that does not exist and is giving it a twist that is not needed. The way history has been cleverly twisted by the likes of Romila Thapar, Arundhati Roy, Yogendra Yadav, and Irfan Habib among others needs to be countered. There had been a deliberate attempt to distort India’s culturally rich history to suit the whims and fancies of a select few, and now is the time to reveal the ‘real history’. History has indeed been twisted and colored differently by various people. However, when it is presented in its original context, it shouldn’t pose a problem to those who initiated portraying it wrongly. Only a select few can’t portray history; it has to be accepted and understood by everyone, and there is no competition here. If some people are bringing light to the rightful past of India and that too with substantial evidence, why should that be a problem? Isn’t free thinking a democratic virtue or is it a privilege reserved only for the selected few? Arundhati Roy has openly criticized Hindus and Hinduism and sympathized with Kashmiri separatists. Her efforts to whitewash the brutality inflicted on Kashmiri Pandits and their exodus were evident and blatant. Traversing back in time, Roy had vocally stated in Oct.2010 on her visit to Srinagar, “Pity the nation that has to silence its writers for speaking their minds,”. So, is expressing one’s views suddenly forbidden? It is the left-liberal gang’s favorite strategy to selectively target Hindus and those who voice their concerns.

“Chaturvedi uses experts to layer this narrative and give more credence to this point of view. It is a narrative that is getting stronger and stronger in the minds of a section of people. By adding a heavy term like ‘ideological subversion’ into the mix, it will presumably gain more credence. To then further assemble it as a series of threads being woven together for the first time is another intelligent move on Praveen Chaturvedi’s part.”

Evidence from history clearly shows that those with perverted interests deliberately damaged, destroyed, and damaged the Indian society. A rich heritage of arts, education, science, society, etc., was systematically robbed from the people. Director Praveen Chaturvedi has emphasized the same with proper research and without misrepresenting or omitting facts. It is again unclear what the exact problem is.

“The ‘experts’ who punctuate the documentary with their analyses include Neeraj Atri, president of the National Centre of Historical Research and Comparative Studies in Chandigarh and author of Brainwashed Republic. Sandeep Balakrishna, founder of the Dharma Dispatch, a website on Hindu history and culture also features in Sahebs Who Never Left along with Aabhas Maldahiyar, author of #Modi Again: An ex-Communists’ manifesto.”

The way the word ‘experts’ has been highlighted in the above-written excerpt is laughable. We are left to wonder who has granted sole credence or responsibility for maintaining intellectual credibility to the elite few ‘left-intelligentsia’ of this country. People like Romila Thapar who used to peddle lies and hatred based on a concocted story of the Aryan and Dravidian races were considered intellectuals. On a different note, The Jaipur Dialogues has been vocal about rewarding anyone who proves the theory’s credibility. So far, no one has risen to the challenge. But alas, anyone who attempts to correct history is considered an ignoramus. Standing up against the left-peddled lies makes one a villain to them. The idea of intellectual ‘self-entitlement’ has crossed dangerous boundaries, where anyone opposing them will be disrespected and belittled.

“The director should have been able to convince his audience with ease considering the current climate but he fails. There is something almost laughable about the seriousness with which such an extremist and over-the-top perspective is being handed to the viewer by the filmmaker. On the surface, there are many voices, but the perspective is only one.”

One wonders what sort of extremism the director is trying to propagate through the film? In a democracy, if sharing the truth about people like Nehru and Gandhi and posing valid questions is considered a sin, then are we truly living in a democracy? The questions raised in the film have been addressed to the T. What makes it extremist to criticize a certain group of people like Nehru, Jinnah, and Gandhi? We live in a democratic system where raising valid points and asking legitimate questions is considered healthy, even encouraged. So why are words like extremism and over-the-top narratives used only when Hindu rights are upheld and atrocities committed against them are brought to light? The argument about many perspectives and one voice doesn’t hold water. As there are many perspectives and voices, each with its own value, imposing one’s choices and perspectives has been the stronghold of the left.

Due to India’s left-dominated democracy, dissenting voices have always been suppressed. Suppression has sometimes been mild, and sometimes strong, but there has always been a stubborn resistance to letting anyone speak and counter the wrong. The perennial use of the victim card has been the favorite tool of the ‘pseudo-secular, Marxist, and the left-liberal’ cabal. Unfortunately, today’s times actively encourage only those individuals who pursue a divisive agenda with vested interests. Creating a healthy environment for debate has never been the forte of liberals. Corroboration of this is provided by ‘The Print’s’ article. It is evident from the vicious manner in which the film is being attacked by leftists. This is because it has struck a chord with the people of India, especially the Hindus. Since this reaction is just the result of the first installment of ten, the stirring renaissance among Hindus will continue since they need to stand up for their rights. It seems that those who seem to disagree with anything Indian have hissed at the idea of reviving Indian society and its cultural ethos, which has been meticulously trampled on. It is pertinent to remember people like Nambi Nambiyar who were deliberately wronged by the system if highlighting people like Arundhati Roy and Winston Churchill has been so wrong. Unlike many others, this film is not propaganda designed to promote extremism and blame people, but rather a wake-up call for the Indian society, a voice for rightful dissent and reasoning, as well as a step towards re-correcting historical injustice.