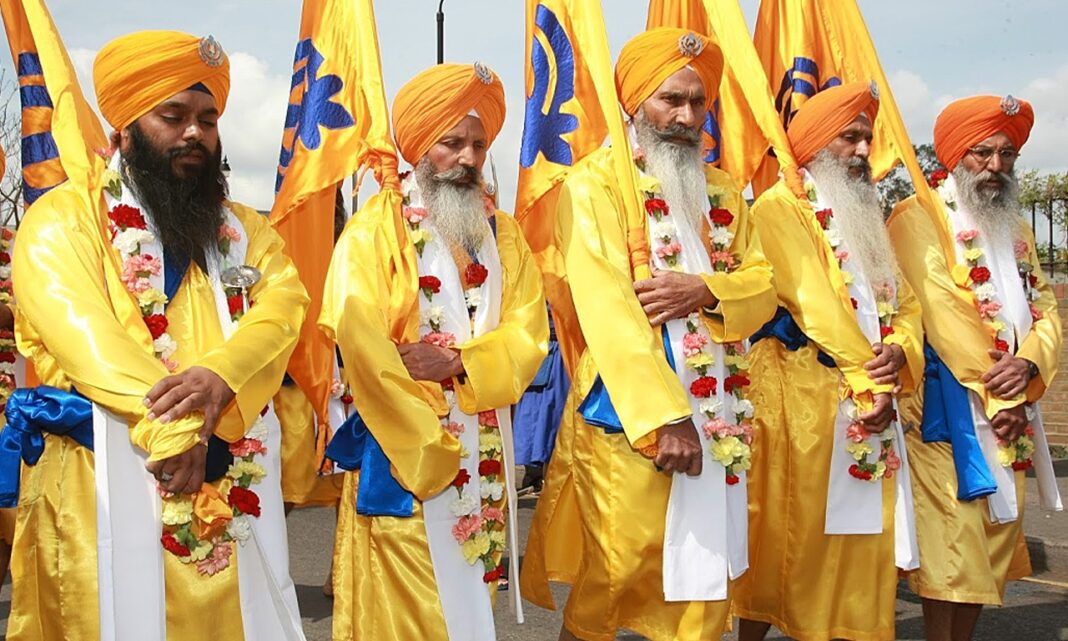 There has never been a time when ‘Shakti’ was not invoked. In the time of utter distress, great floods, fear and attack of enemies. Shakti is the primeval force that is the cause of the cosmos. Greatness of Devi is scribed in the most important Shakt purana, Markandeya Purana. The whole evolution of the universe through Devi has been elaborated in the intervowen stories of Purana. Shaktism is not just a part of Hinduism. It covers the whole gamut of Indic religions. Whatever path you choose to believe in, one cannot separate oneself from the Supreme Mother.

Sikhism arrived during the wave of Bhakti tradition with Shri Guru Nanak Dev Ji. Targeting many different aspects of social malpractices that had creeped in the society. Initial dedication was towards ‘Harinaam’ and a formless aspect of Ishvara. As the times passed on, the ninth Guru, Shri Teg Bahadur got martyred. On 11 November 1675 he was beheaded in Delhi, publicly. Aurangzeb

This heart rendering event, brought a turn of fate for the whole Sikh community and Guru Teg Bahadur Ji’s son, Guru Gobind singh. He was made the 10th Guru at the tender age of 9, in the year 1676. His education was taken up in full swing after that. He was taught Sanskrit, Persian, Brij,Hindi languages. He was taught martial arts by a Rajput warrior. In the year 1684, Guru Gobind Singh Ji, writes a historic rendition of Markandeya Purana. Written in Punjabi, is dedication to Maa Durga, “Chandi Di Var”.

This was a new dawn for the Sikhs. Establishment of a new warrior front, the Khalsa! This was an inevitable step, because of the current situation. The western frontiers had been all open, there were atrocities unleashed upon the Hindu populace. And therefore, it was the need of the hour to invigorate ‘shakti’, call upon Devi to bestow her immense strength. This was the basic idea of forming Khalsa. This was a group dedicated to fight the adharmic forces on a war footing. The military might of the Hindus which was fragmented at that point of the history, was targeted to be revived through khalsa. To save that corner of the country it was a mammoth task taken up by Guru Gobind Singh Ji. And this was done by the grace of Shakti, Maa Durga.

1000 RTs and I’d create a short thread on Durga Ma & her devotee Guru Gobind Singh that will leave SGPC McSikhs & Khalistanis no place to hide.

Nishchay kar apni jeet karoon”
[1]O Shiva (name for mother Godess), grant me the boon, so that I never deviate from the righteous deeds. Neither I get frightened ever before the enemy, when in the battleground. And definitely finish … Continue reading

Chandi di Vaar is a philosophical and spiritual and heroic composition, a devotional rendition to Maa Durga. It comes as the fifth Baani of Dasam Granth. But it is to be noted that Shakti upasna doesn’t come with Guru Gobind Singh Ji, rather it is a legacy of all previous Gurus. Shri Hargobind Ji’s sword,is etched the name “Maa Kaali”, who is Guru Gobind Ji’s grandfather.

On records, it comes as an important information, that ‘Naina Devi’ is the kuldevi of Teg Bahadur Ji.

This issue arises, because over the period of almost two hundred years many false claims have been made to establish disintegration of Sikhism with that of Sanatan Dharma. Beauty of Sikhism is that all the purified essence of Hinduism has been integrated within it, which makes it sublime.

Guru Granth Sahib is a collection of philosophical ideas, mythological and historical anecdotes of a Puranic Bharat. It has devotion of Hari, Vishnu and Rama, through the songs and words of many saints. But with the martyrdom of Guru Teg Bahadur there came a decisive break. Where the Shaktism came along as a matter of contemporary times. The ideals of Gurus putting devotion, spiritual devotion and wisdom above rituals. Hindus always used to give the elder son to Sikhi. But now that tradition has come to a halt. A false ideas have been propagated to bifurcate Sikhism from Hinduism. And this was cunningly done by the British. However, the great memory and tradition of gurus and the great unity of consciousness cannot be eradicated from the collective consciousness. And it is bound to rise, and is rising.