Shri Lakshmi Narasimha Swamy and the Land of Godavari, Andhra 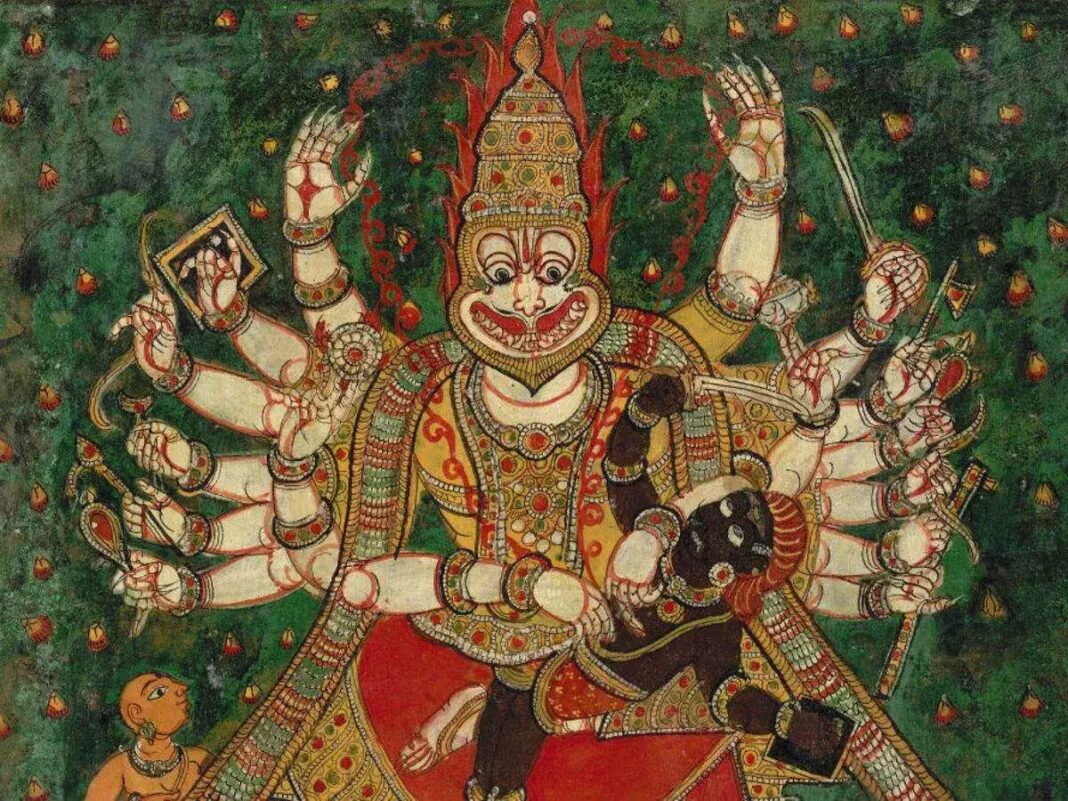 Shri Narasimha Swamy is the fiercest of avataras of Shri Vishnu. Among the 10 major incarnations of Bhagwan Vishnu, Bhagwan Narsimha is the 4th avatara. His incarnation on the earth was meant to end the atrocities of rakshasa Hiranyakashyapu and bless the Lord’s super devotee, Prahalad.

However, in customary form, apart from southern part, rest of Bharat do not have a significant Narsimha worshipping tradition. In Andhra Pradesh, there are several big temples dedicated to Bhagwan Narsimha and he is worshipped as the great deity of Andhra along with his great consort, Shri Mahalakshmi.

Located in the East Godavari District of Andhra Pradesh State, this one of the most significant temples of Lakshmi Narsimha Swamy is in a town named Antarvedi. Antarvedi is located in the west of the Bay of Bengal and north of the Godavari River.

The point where, Bay of Bengal and Vashishtha Godavari (tributary of Godavari) meets is known as ‘Sapta Sagara Sangam Pradesham’, which means the point of confluence of seven seas. It is the 32nd pilgrimage kshetra among 108 of all Narsimha pilgrimages.

Architecturally, it has a 5 storeyed Vimana Gopuram with temple building in a circular form with a height of 54 feet. It is said that ‘Shri Chakram’ is kept in the temple at the depth of 54 feet below the ground.

There are five important spots at this Holy shrine:

The temple holds several ‘pauranic’ itihas within its ambience which includes a continuity of existence from Satyuga to Dwapara Yug.

Rishi Vashisth had established his ashram (hermitage) at this very spot. And also, Brahmadeva had performed Rudrayagna to get freed from the sins he did against Bhagwan Shiva. Brahmadev established Neel Kantheshwara temple at this place. Therefore, this place came to be known as a ‘vedi’, having a sacred place of yagna.

However, Shri Narasimha Swamy’s divine presence in this place accounts for a great battle between the demon Raktavilochana and Shri Narasimha. Raktvilochana was the son of demon Hiranyaksha who had been slain by the Varaha avatara of Shri Vishnu. The demon had resolved to take revenge of his father’s death and gain as much power as he could. He did penance for many years and asked for a boon from Mahadev, that the number of sand particles drenched by the blood drops falling from his body in a war, would produce equal number of demons equally powerful to him. This boon made Raktavilochan a tyrant and he started harassing sages and cows and started to obstruct the vedic-yagnas.

In the progress of events, Rishi Vishwamitra, who wanted to take revenge upon rishi Vashishtha, persuaded Raktavilochana to kill Vashishtha’s hundred sons (disciples) in his absence. The demon did so, and this caused great grief to both Vasistha and Arundhati. This proved to be a very significant event as Rishi Vashishtha prayed to Bhagwan Narsimha and called the Lord to take him out of this grief.

This great teertha soaked with the immense power and divinity of Narsimha Swamy and Devi Lakshmi had been worshipped by Shri Rama in Tretayuga and by the Pandavas in Dwapara Yuga.

In Kaliyuga it was built 3 times, and recently in 19th century by a generous Kshatriya Kopanati Krishnamma.

In Magha Shukla Ekadashi (in February) ShriLakshmi Narasimha Kalyanam (divine wedding) is celebrated by the devotees. This festival and great celebration is done with great fervour and enthusiasm. There are many more such pilgrimages attributed to Lord Narasimha Swamy and lakhs of devotees pay their obeisance to the great Lord.

Expanse of Hinduism from small villages to a great metro-city to a small town is visibly grand in every aspect. This spiritual unity which is often denied by the haters of Sanatan Dharma is our great strength, which needs to be recognised by us Hindus.