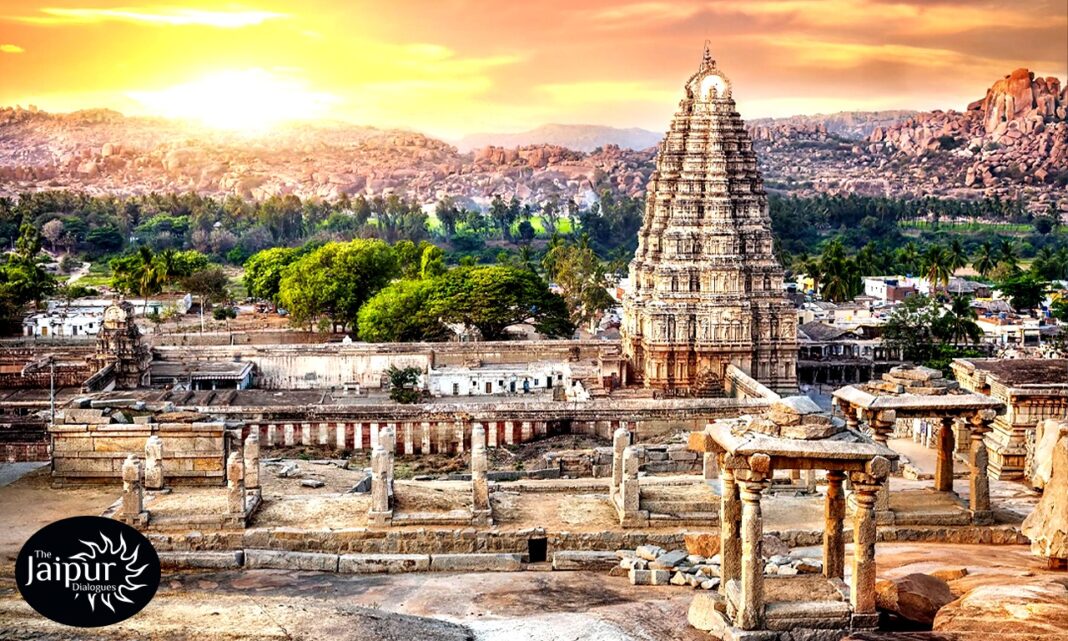 ‘Dharmic teerth’, pilgrimage has always been a part of Bharatiya lifestyle. Festivals and pilgrimages are a cause rejuvenation from a mundane lifestyle and bring joy amidst sufferings of life. Bharat is a country and culture which always celebrates revival, newness. Karl Marx had once claimed that, India is a stagnant society; its villages have remained the same from a thousand year. However, this was written as piece of criticism and mockery. But the underlying idea behind this stagnancy is not actually being left behind. It signifies, ‘timelessness’. The recent excavations and cultural study by Dr. Shinde in Rakhigari, Haryana is proving the same. Through the study it has been established that Harappan culture still holds continuity in the villages in and around that place. This doesn’t show that we are left far behind. Rather, we understand life, its nuances, its elements of temporariness and its elements of permanence.

Pilgrimages and festivals are the backbone of that timelessness of Dharmic civilization. The spiritual significance which they hold has established them to be great centres of sadhana and tapas. However, as a sociological factor they are the backbone of economy. When it comes to 3 Fs- festivities, fairs and fasts; they are the biggest sociological factor which keep us running, living and living joyfully.

The recent Mahakal Corridor can be seen as a big boost to the economy of the place and the country. According to NSSO (National Sample Survey Office) India’s religious economy is of almost 3.02lakh crores. To harness this potential it becomes important to rejuvenate the ancient ideals and practices and places.

The local market needs support through the throngs of people coming along from different parts of the country and world. Through development of Dharmic places and improvement in the facilities, people will travel frequently.

There are many aspects of a tourism, like accommodation, logistics, transportation, food and handicrafts. Street side shopping and local delicacies are appreciated and are recognized.

Kashi Vishwanath Corridor and Ayodhya Circuit have brought the Dharmic paradigm on the forefront. This is a magnanimous effort done through the contribution of Hindu society. This not only depicts our ardent devotion, but also the enterprise with which we are leading our economy. Until now, under the expanse of modern architecture, British era monuments were the highlights of Indian tourism. The India gate, Gateway of India, Lotus temple, Victoria memorial, Rashtrapati Bhavan, etc were always on the bucket list. But now, people want to visit Dharmic places and rejuvenate themselves. Through the programmes by the Government of India there are many efforts done with this object in mind. HRIDAY Heritage City Development and Augmentation Drive and PRASAD Pilgrimage rejuvenation and spirituality augmentation Drive are the foremost policies.

When it comes to Bharat, its spiritual and ancient historical glory are the point of highest attraction. However, there is still very less recognition of these places. The hill stations developed by British and the places like Khajurao, which became a matter of awe for them are the most famous. Along with that the great royal forts and palaces of Rajasthan are the highest attractors of worldwide tourists in India, because the royal families are also involved in their care and promotion.

As Yog and Ayurveda are now reaching to the west, the true colour and spiritual beauty also needs to be brought to the limelight. International tourists and the seekers of truth will feel attached and attracted to the Dharmic ambience when there will be greater significance and care given by us to our places.

Therefore, as Kautilya states that ‘’rajyasya moolam arthah”; country’s focus should also be on bringing economy to the prime. And what a moment it would be, that, Dharmic civilizational roots become its harbinger.

There can be many prospective enhancements done to elevate the Dharmic Economy. Adding cultural centres, in and around the pilgrimage centres. They can be centres for learning and teaching the arts, music,traditions of our Sanatan Dharma. This way youth can also be engaged under the spiritual ambit of teertha ksetras. Earlier, temples used to be the powerhouse of the country; economically, culturally and traditionally. To bring that past glory more relevant steps need to be taken.