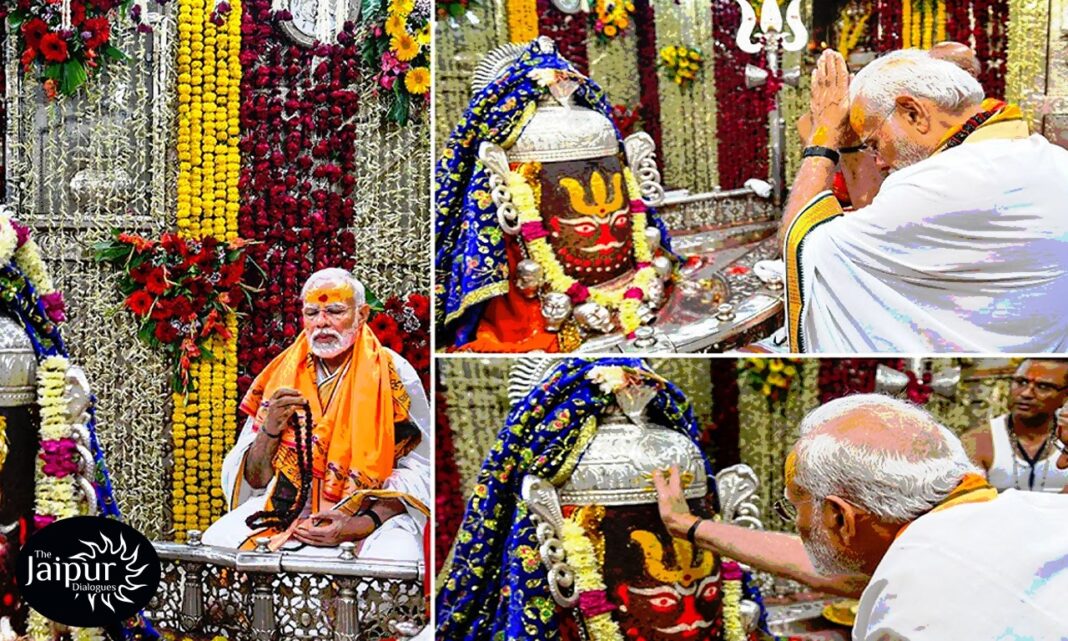 In Ujjain, PM Modi inaugurated the grand and beautiful Mahakaal corridor. In addition to being a sight to behold, the corridor represented a step toward reclaiming Hindu identity. Inauguration of the first phase of Mahakaal Lok corridor follows the elevation of the other two Jyotirlingas, i.e., Kedarnath and Kashi Vishwanath.

In addition to the eleven other Jyotirlingas, the Mahakaal Jyotirlinga has its own unique significance. It’s called Mahakaal because worshipping Mahakaal Lingam can prevent untimely death. Mahakaal is the only jyotirlinga that faces south, while all the other jyotirlingas face east. Traditionally, the south is considered the direction of death. According to a belief, Shiva resides in the city and is its chief deity after the residents sought his protection. A king called Chandrasena who was devoted to Shiva ruled Ujjain. Having been pleased by his prayers, Shiva appeared in the form of Mahakaal and destroyed his enemies.

There are several ancient Indian poetic texts that mention the Mahakaal temple. The Mahakaal temple was also described by Kalidasa in his epic Meghadutam (Purva Megha) written in the 4th century. Hindus regard Ujjain as a seat of learning, known as Avantika in the 6th and 7th centuries.

In Ujjain, Shri Krishna also learned from Rishi Sandipani’s ashram. In Ujjain, astronomers and mathematicians such as Brahmagupta and Bhaskaracharya settled much later.

As per Surya Siddhanta, that’s one of the earliest texts on Indian astronomy dates back to the 4th century. Ujjain is geographically located at a spot where the zero meridian of longitude and the Tropic of Cancer intersect. Based on this, many temples of Ujjain are in some way connected to time and space.

The temple was attacked by the Turkish invader Shams-ud-din Iltutmish in the year 1235. The present style of the temple was built by the Maratha general Ranoji Shinde in1734. The temple is an amalgamation of the Bhumija, Chalukya, and Maratha styles of architecture.

The grandiosity of the corridor has raised a lot of controversies, but for what purpose? This cost is not a burden on the government exchequer, but what Hindus deserve. Unlike churches, mosques, gurudwaras, and other religious institutions, Hindu temples and places of worship are solely under governmental control. India is the only country where corrupt politicians misappropriate our wealth and lecture Hindus on secularism. The vast influx of funding received by Christians and Muslims was never questioned by the majority of politicians. The purpose of that is often nefarious. In their own country, Hindus have always been questioned about propagating and practicing their faith.

The fiery attitude and the no-nonsense speech from PM Modi demonstrated that India is regaining its lost glory. There will be no mention of the neglect suffered by Hindu religious sites or the unnecessary royal treatment meted out to mausoleums or Islamic ruins by secular-liberal cabal members. All these claims of unnecessary expenses are reserved exclusively for Hindus. But times are changing now and a Hindu Renaissance will take place gradually and steadily. PM Modi’s vision of reclaiming Sanatan Sanskriti is inspiring and propelling India towards becoming the ‘Vishwa Guru’ it once was.