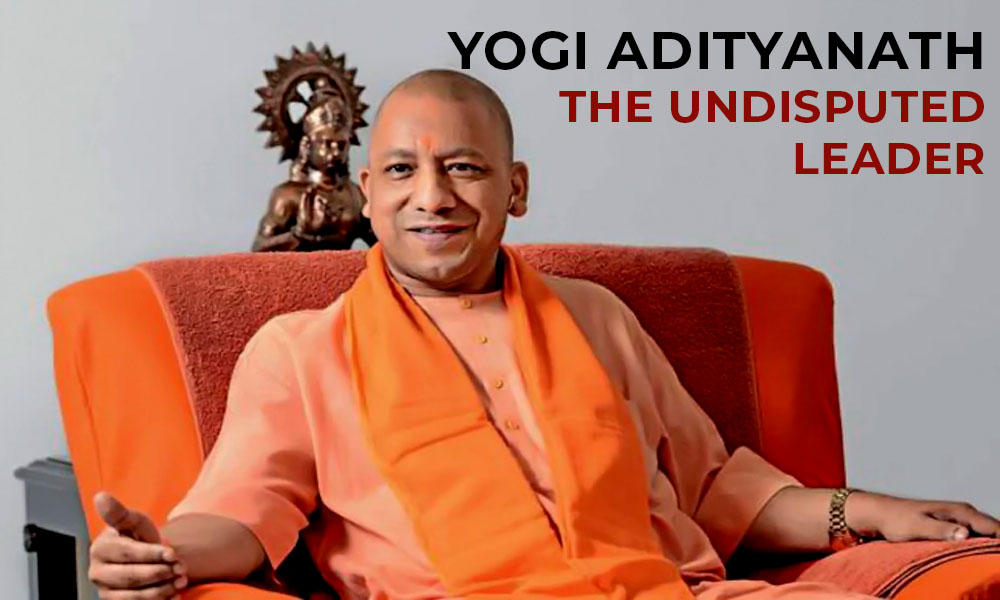 Yogi Adityanath, the firebrand Hindutva leader has recently been on the radar of the Lutyens media and the liberal cabal. The reason behind this is the rise of Yogi Adityanath
from a normal MP to one of the most popular CM’s. The popularity of Yogi has been so high, that in any election around the country, he has been the most popular face to campaign after PM Modi. Since then, the media has seen Yogi Adityanath as a threat to their political ideology. There are seldom any leaders who manage to stay in the politics so long without compromising their ideology, and Yogi Adityanath is one of them. This commitment is what scares his adversaries the most.

The left has tried several tactics to dent the image of Yogi Adityanath in the recent past. This started with dividing the Hindu unity by portraying a clash between Brahmins and Thakurs. For this purpose, the media even portrayed the name of Yogi as Ajay Mohan Bisht instead of Yogi to attach a caste symbol to it. The media even went ahead to call the encounter of criminals like Vikas Dubey as the oppression of Brahmins in UP by the Thakurs. After failing miserably in creating this divide, the media shifted to the other plan. As UP faces the disadvantage of doorstep media, Yogi Adityanath was falsely criticized by the media for failing to manage the covid pandemic even though the performance of UP was much better than the so-called progressed states which were the darlings of the Leftist media.

The situation in UP was a bit grim during the second wave as was in the entire country.
However, Yogi Adityanath managed the situation and brought it under control in a record
time of just two weeks.

He had minimum tools at his disposal as compared to high-income states like Maharashtra or Kerala which had much better health infrastructure than UP, yet failed to control the pandemic in their respective states for almost five to six months. The Uttar Pradesh government managed to conduct as high as 5.3cr tests till date along with 2.2cr vaccinations.

The recent announcement by Yogi Adityanath plans to vaccinate around 1cr people in the month of June. For his great management during the pandemic, the Yogi administration was also lauded by WHO saying that ‘UP was going till the last mile to stop Covid-19’.

After failing in their first two gambits of caste divide and covid mismanagement, the left started a new rumour about the conflict between Yogi Adityanath and Narendra Modi. Some even started reminding Yogi to remember the fate of Kalyan Singh who was also a Hindutva Icon but was nowhere to be seen today because he was trying to challenge the then PM Atal Bihari Vajpayee. The media also started cooking their stories when Amit Shah and Narendra Modi did not tweet about Yogi on his birthday, completely ignoring the fact that they had personally called to wish him. These rumours are now settled as the BJP recently announced Yogi Adityanath to be their CM face in the 2022 elections and the recent meet of Yogi and Amit Shah is expected to further enrage the liberal cabal for their yet again failed attempt.

The left forgets that Yogi Adityanath does not derive his power from the media, unlike few
other politicians. He is a leader on the ground and enjoys mass support beyond the caste
lines. From Brahmins to Dalits, everyone respects Yogi Adityanath and adores him as their
leader. One of the viral videos during the West Bengal election of an old lady saying ‘We
want nothing else but leader like Yogi Adityanath in our state’ shows his popularity and
mass base not just in UP, but in entire India. The tricks of the Left have been
counterproductive on Yogi Adityanath and what is worse for them is, he is much more of a
Hindutva Icon than Modi is, and enjoys much larger Hindu support in entire India than the
left expected it to be. Yogi is not a leader on television, he is a leader on the ground. He is
the undisputed leader of Uttar Pradesh and BJP’s only choice to retain power. The sooner
the left understands it, the better it would be for them. Else, as Buddha said- Life would be
suffering for the left.