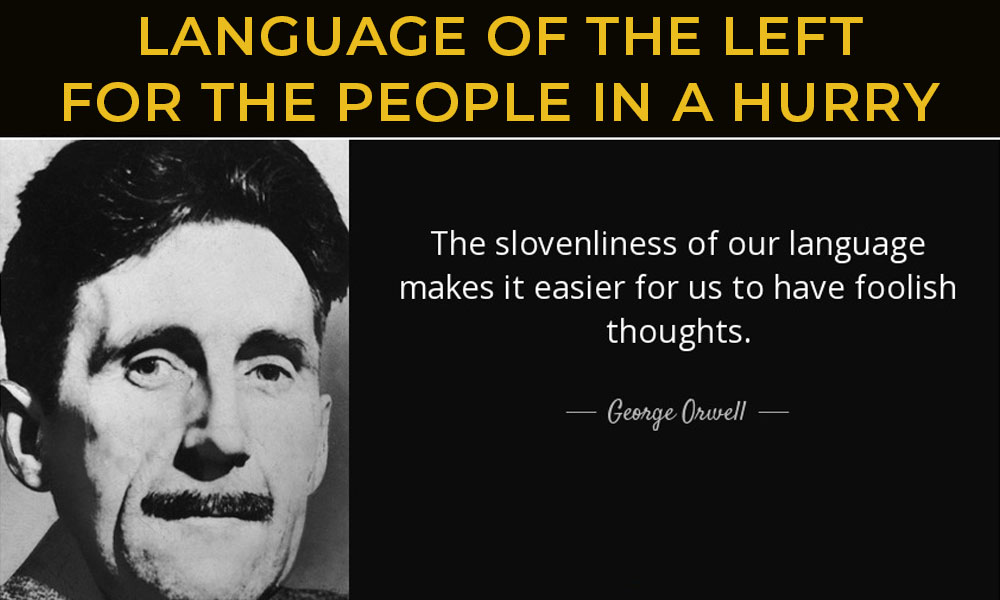 Recently, on 4/6/21, we had a great discussion with Koenraad Elst and Shankar Sharan on the book of Sitaram Goel titled ‘Perversion of India’s Political Parlance’. This book essentially talks about the language of the left and how it has evolved over the years and how it is impacting society even in current times. In the words of Sanjay Dixit, this book is ‘Gagar me Sagar’, which means it has expressed too much in too few words. This 65 pages book is an essential read for every non-left person to understand the tactics of the left through their wordplay. However, this article is for those who don’t have enough time to go through the book or the live session. This article tries to summarise the book and its essential terms for the people in a hurry.

The book has 8 chapters discussing the entire wordplay of the left. The first chapter titled
‘Something seriously wrong somewhere’, talks about the experience of Sitaram Goel Ji while he was the secretary of JP Narayan. Sitaram Goel discusses in this chapter how the top brass of the Indian polity who was back then the ‘intellectual’ class too, had so many misconceptions about our history and our Dharma. The chapter starts with Mr. Goel getting a request from an RSS Swayamsevak to request JP to attend their function. As RSS was termed a communal organization from the beginning by the press which was owned mostly by the left-leaning intellectuals, JP also had the same misconception in his mind. When Sitaram asked JP Narayan about the RSS function, JP was completely shocked as to how Mr. Goel can even ask such a thing. He said “You know that I have a certain standing in the country and a certain reputation in public life. You should not expect me to get mixed up with an organization that is known for its communal, reactionary, and revivalist character.” Sitaram Goel Ji however debated with JP on this issue and was eventually successful in persuading him to attend the RSS function. Post-function, JP was quite impressed with the discipline of the Swayamsevaks and even their qualifications (Since almost every one of them was either graduate or a post-graduate). He said, “In our socialist movement most of our workers are not even matriculates.” Along with this Sitaram Goel also described how JP did not have even basic clarity regarding the history of India. Mr. Goel said, “J.P. was repeating what most of our historians were saying from their august seats in universities and research institutes. According to the professors, the Mughal empire was a manysplendoured national mansion, while the Maratha confederacy was a congregation of self-seeking marauders.” After this incident, Sitaram Goel realized that there was something wrong somewhere, but he was unable to point the exact issue which had created a gulf between a national leader and a national movement that were both working for the same cause yet both stood apart and could not even see eye to eye on matters of major importance.

In chapter 2 titled ‘Words which defy dictionaries’, Sitaram Goel discusses at length how some of the words we use in our day-to-day life defy the dictionary.

Sitaram Goel rightly defined this situation where ‘The so-called Rightists are collapsing under the weight of certain words which the Leftists have heaped upon their heads without rhyme or reason.’

In the third and fourth chapters, he goes on to explain how the language of the left is an imported language that talks in the same grammar of other imperialist languages like Islam, Christianity, Communism, and British Imperialism. Like every other imperialist language, the language of the left divides mankind into two exclusive camps. It bands all believers into a brotherhood that cuts across nations. Sitaram Goel believes although Hindus overcame Islamic imperialism, but they failed to see through the language of that imperialism, and hence a lot of Hindu saints accepted Islam as a religion. A similar phenomenon is happening with the analysis of left by the Indians today. Although Indians have identified the communists, they are unable to identify their imperialistic language.

In the fifth chapter titled, ‘The History of Leftist Language’, he goes on to explain the history of all the fundamental formulations of the Indian left. The Prophet of the Indian Left, M.N.Roy, believed that India has never been a nation before the British conquest. The Gangadhar Adhikari thesis called India ‘a number of nationalities inhabiting a continent than a composite national unit.’ It even goes ahead to preach that Swami Vivekanand was a leader of ‘Spiritual Imperialism’. The language of Communist imperialism was borrowed, lock, stock and barrel, by the Congress Socialist Party led by Pt. Nehru. The only point on which the two (Communists and Socialists) differed was the personality and role of Mahatma Gandhi. While the communist called him a ‘Bourgeoise scoundrel’, the socialists believed that the mass movement was not possible without the leadership of Gandhi. Sitaram Goel believes that the potential for purveying the poison of Leftist language is considerable, and Indian nationalism, which remains their topmost target, has to guard itself against this.

In the sixth chapter titled, ‘The role of the Leftist language’, he goes on to explain how Nationalism in India was named ‘Hindu Communalism’. The leftist launched a blistering attack on nationalists and branded them as “Hindu communalists who were bent upon breaking the broad national front against British imperialism by bringing in religious obscurantism and cultural chauvinism borrowed from the primitive Hindu past.” The nationalists were thus made a suspect in the eyes of Congress vis-à-vis Islam, so much so that all the nationalists had been ostracized from the Congress fold. The left even went on to accuse Congress of using too many Hindu symbols even going as far as terming the national song ‘Bande Mataram’ as an ‘Anti-Muslim Crusade’. Sitaram Goel explains that The specter of Hindu communalism has never ceased to haunt the Hindus. Nor has the love for Islam suffered any loss after the partition. In fact, The love for Islam and Muslims has been labeled as secularism in the post-independence period.

In the seventh chapter, he goes on to discuss the role of Mahatma Gandhi. He believes that it is a mistake to blame Gandhi entirely for appeasement policy. He says “The anti-Gandhi nationalists have never tried honestly to face the fact that it was he and not they who had stirred the minds and hearts of Hindu masses”. While explaining Gandhi’s policy towards Muslims as – full of appeasement which made Muslims more hostile, he even states the fact that Gandhi is to be blamed for his failure vis-à-vis Muslims, only in so for as he was at the helm of affairs during that particular period of Indian history. He doubts that the Hindu society would have been able to prevent partition even if there had been no Gandhi. Sitaram Goel states how the Hindu leaders preceding Gandhi approached the Muslim problem. He explains how Hindus contributed to the Anglo-Oriental Mohammedan College which later became the Aligarh Muslim University and the main seat of Muslim separatism. He recalls that the Swadeshi movement faced a great backlash in East Bengal with an orgy of riots, but there is no evidence of Hindu leaders coming forward to beat the backlash. He also explains that in the Lucknow Pact, the Hindu leaders conceded the separate electorate, even after knowing the idea of pan-Islamism. The leader of Congress back then was Lokmanya Tilak and not Gandhi. Justice demands that anti-Gandhi nationalists review Hindu history vis-à-vis Islam and lay the blame where it belongs. They will soon find out that Mahatama Gandhi was neither the first nor the last to accord the status of religion to Islam. Most Hindus are still chanting Sarva-Dharma-samabhava vis-a-vis Islam in the face of Muslim fanaticism, though over decades have passed since the death of Mahatma Gandhi. Sitaram Goel explains that the failure of Mahatma is the failure of Hindu society.

In chapter eight titled, ‘Towards a language of Indian Nationalism’, he explains that the one lesson we learn from the freedom movement as a whole is that a religious and cultural awakening in Hindu society has to precede political awakening. The language of Indian nationalism has to be the language of Sanatana Dharma before it can challenge and defeat the various languages of imperialism. He explains that close creeds like Islam and Christianity cannot be allowed to subvert India’s ancient spiritual heritage. The complex culture created by the spiritual traditions of Sanatana Dharma is the national culture of India. The cultures brought in by Islam, Christianity and Communism are imperialist impositions. Those who talk about a composite culture are either ignorant of what culture really means or are trying to sabotage India’s national culture in the service of this or that imperialism. He explains that a struggle is taking place in the political arena between the forces of nationalism and the forces of anti-nationalism. Leftism, even when it is not a part of the Communist movement is, by and large, the political expression of a self-alienated psyche. It serves as a smoke-screen for all anti-national forces. Sitaram Goel believes all the nationalists must clean the anti-national forces and become one again as a national society in the ancestral homeland of Bharatvarsha. This is possible by countering the Leftist language and by promoting the National language that has been developed by our seers and Rishis over the ages.