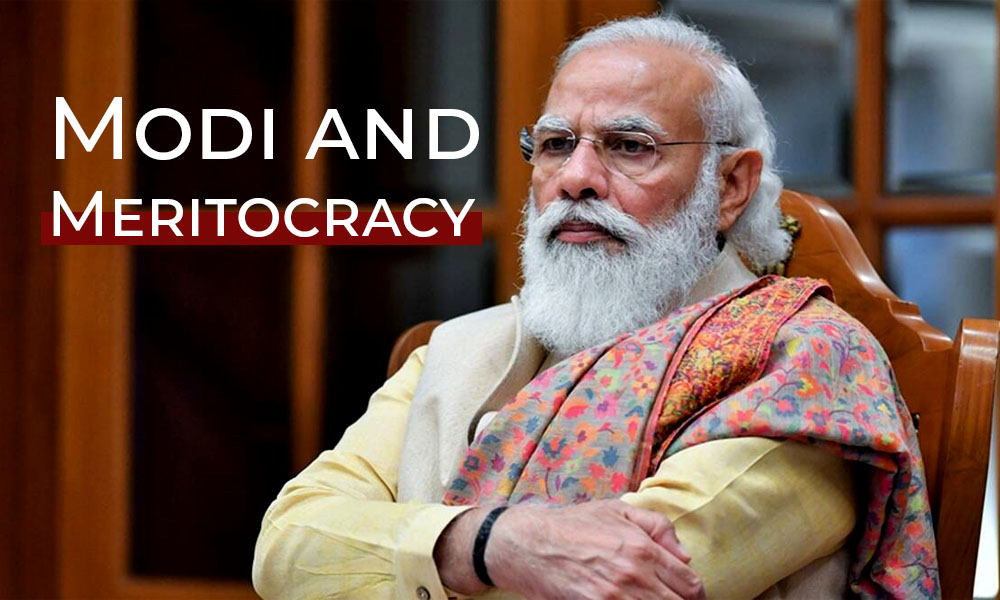 Meritocracy refers to the notion that individuals are promoted to positions, in any field, based on their ability (talent, effort and previous achievements) to do that particular job rather than inalterable innate characteristics such as, family background, ethnicity, race, etc. In the social and political context, a society that recognizes, upholds and further permeates the above notion through its social and political institutions could be called a meritocratic society.

Narendra Modi’s victory in 2014 was in many ways a reaffirmation of India’s belief in the notion of meritocracy. The victory could be seen through many lenses; that of a triumph of the recognition of our Hindu inheritance over secular fundamentalism, that of a conservative over a liberal, that of a pro-marketer over a quasi-socialist, even that of the masses over an elitist. But an unmistaken and arguably crucial lens was that of a worthy over an unworthy. A boy born to a Gujarati Hindu family of grocers in Vadnagar, who ran a tea stall with his brother near a bus terminus, belonging to an OBC (other backward classes) community, defeated a fourth-time dynast of the much-popular Nehru family. Meritocracy had rarely found a grander narrative than this (maybe until 2019!).

Any culture in any society is a consequence of certain ideas triumphing over other ideas. A relatively healthy and functional society, results from a healthy culture which itself results from adoption and practice of healthy ideas as opposed to unhealthy ideas. Most, if not all, recognized healthy societies have a great deal of meritocracy entrenched in its social and political institutions. They are societies that reward the right, the truth tellers, the competent, the hardworking, the meritorious and punish the wrong, the liars, the incompetent, the corrupt, and the unmeritorious. They are societies with well-functioning hierarchies. A well-functioning hierarchy is one wherein there is a great deal of mobility; people who do well climb up the hierarchy and people who don’t do well fall below in the hierarchy, and this process goes on continuously at all times.

Societies that cease to be meritocracies tend to degenerate into the extremes of either too much order like dictatorships or too much chaos like anarchies, on the political front; and general dis-functionality, on the social front. A dictatorship is often characterised by a stagnant hierarchy, one wherein those in power at the top remain in power through its misuse and those at the bottom remain at bottom, making the hierarchy immobile. An anarchy on the other hand, is one where those at the bottom forcefully pull down those at the top and the hierarchy itself ceases to exist. The solution to these extremes again being a mobile hierarchy where the mobility occurs on the basis of merit.

Meritocracy was without doubt one of the pillars of the 2014 Modi grand narrative. The staunch rhetoric against the corruption of the Congress Party (corruption itself being fundamentally unmeritocratic) and the constant projection of Narendra Modi versus Rahul Gandhi as worthy versus unworthy were inescapable realities of the 2014 election. This narrative only grew in strength many folds during the 2019 election. In 2019, Rahul Gandhi was now the President of the Indian National Congress, the face and leader of the grand old party of India. So, unlike 2014 where he could shrug off the responsibility of the defeat and share part of the blame with the then president of the party, his mother Sonia Gandhi and perhaps other senior leaders, chances of that happening this time around were rather scarce. And this played into the hands of the BJP who could now amplify the worthy versus unworthy narrative to greater effect. This is not to say that there weren’t other crucial factors in the determinant of the election, but it is unquestionable that the merit angle helped Modi immensely in securing the scale of the victory that he did.

Whether it is the ever-present emphasis on bettering ourselves and striving towards perfection or our obsession with the “first position” in every field of life, from school examinations to dance competitions to a cricket tournament, the notion of meritocracy is deeply entrenched in the Indian psyche, being a part and parcel of everyday life. Although, still by no means a universal aspect of Indian life, finding serious setbacks on many social and political fronts, including corruption. In many ways, the 2014 and 2019 mandates were proof that the people of India are deeply invested in and value the concept of merit. Although, to what extent this narrative of meritocracy gets translated into action that draws India closer to being a meritocratic society is a wholly different matter.