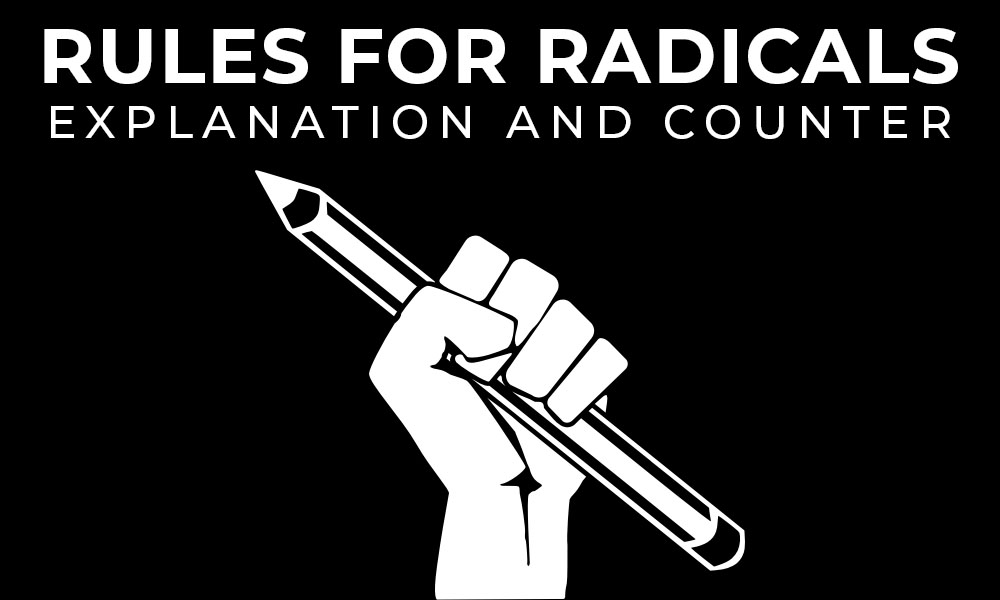 Saul Alinsky wrote a book titled ‘Rules for Radicals’ which became a practical guide for the realist Leftist cabal worldwide and the Panchmakkars (Mulla, Missionary, Marxist, Macaulay’s children, and Media) in the Indian context. This article tries to highlight their strategy and give a practical guide to counter it.

The first rule of the radicals is “Power is not only what you have, but what the enemy thinks you have.” This rule has been extensively used by the ‘Aandolanjeevis’ in India. The Aandolanjeevis have tried to capture the brains of their opponents and have portrayed their power to be much bigger than it was even while they were in lesser numbers. The strategy to counter the first rule is quite simple – The Non-Left must call the bluff. The government was seen on the backfoot during the Shaheen Bagh protests and the Kisaan Andolan. The power of the radicals was much lesser than it was projected to be. The ideal way of dealing with this Anti-CAA rioting was displayed by Yogi Adityanath. He called the bluff and showed the rioters their place.

The second rule is “Never go outside the expertise of your people.” The context behind this is when a person is an expert in something, he is much secure and confident and this strengthens the movement. This rule is implemented by the radicals by using the media to their benefit. The left-leaning media has expertise in fake news and bruising the image of India, so they are precisely given the task they are good at. We saw the examples of this vulture journalism during the pandemic, where the leftists were cooking their meals on the pyres of dead bodies by selling such images in dollars to the West. The best way to counter the second rule is by drawing a bigger line. The non-left should create experts in all the fields to counter the narrative of the left and expose their inhumane techniques.

The third rule is “Whenever possible, go outside the expertise of the enemy.”. This rule was widely used during the Anti-CAA protests. The Left sensed that the government did not have expertise in managing mobs and hence they started implementing the same tactics throughout the nation to create a situation of panic and anxiety in the opposing camps. To counter this rule, the Non-Left should always be on the watch. No one can have expertise in all the fields, but when attacked, instead of being anxious and abducting responsibility, one must give a strong counter-response. The basis of the third rule is the anxiety in the opposing camp. If the non-left replies confidently and gives a strong counter-response the movement would fizzle out. The fourth rule is “Make the enemy live up to its book of rules.” This is preached every day to the BJP. The left(Panchmakkar in India) when in power uses all sorts of means to suppress its opponents but cries for values like liberty and democracy when in opposition. They would cry Fascism in India when BJP arrests some journalists but won’t speak a word, and in fact, celebrate when a nationalist journalist is arrested by a government leaning on their side. The ideas and the ideology of the left are partisan and hypocritic. The best way to counter this rule is to treat them the way they are. In Sanatana Dharma, we have the philosophy of शठे शाठ्यं समाचरेत्- Which means we must treat the evil by evil means. The ideals and morals must not be a barrier while we are dealing with an enemy which is an existential threat to our civilization.

The fifth rule is “Ridicule is man’s most potent weapon.” The left tries to ridicule and create an online lynch mob against anyone who speaks for Hindutva or BJP. This is done by calling them names like Communal, Fascists, Sanghi, etc which has been dealt with in our last article of ‘Language of the Left for the people in a hurry’. This rule can be countered by the same technique. The non-left must ridicule the left for their baseless arguments and their utopian ideas. The left barely has any logic and can be easily ridiculed by the same way they target a certain group of people who are averse to their ideology.

The sixth rule is “A good tactic is one your people enjoy.” The left in India enjoys blocking streets and singing songs against the nation. The non-left should devise a counter to this. To begin with, the left should not be given the space to occupy the streets. The Kisaan Andolan which occupied the Delhi borders later became a picnic spot with Pizza parties and massage centers rallying for the protestors. Since Saul Alinsky recommends doing something people enjoy, the non-left should find the motive as to why they enjoy a particular movement. We should sense their end goal out of it, and disincentivize such activities instead of incentivizing them by our inaction and by giving a soft signal of approval of their power. This encourages them more and we see more Anti-India, Anti-Hindu statements, more rioting, and more blockading. So the non-left must first disincentivize such actions and make sure that the pleasure from the action is lesser than the pain for carrying it out.

The seventh rule is ‘A tactic that drags on too long becomes a drag’. The left tries to keep on creating panic by picking non-existent issues and then mobilizing masses and writing articles about it in the western media. They always try to keep the government and their opponents on their toes. The best strategy used for it is to let them drag the issue so far, that in the end, the masses lose their hope in this cause. This strategy has been mastered by PM Modi, however, he stretches it a bit far sometimes even where the action could pay better dividends than letting them drag.

The eighth rule is “Keep the pressure on. Never let up. Always use some new flank. Keep the opposition off balance”. This rule has been covered in some form or the other in all the above points. As discussed, the Non-Left should constantly be on watch and counter the narrative of the left with strong resistance. The left does not have strong arguments. The Non-Left should confidently present their case and if the left comes down to ridiculing, then we must adopt the same path too. We should never succumb to their pressure and counter their narrative with facts. The confidence of the non-left would put the left off-balance as evident in India with the rising consciousness among the Right-wing or the Non-Left as a whole.

The ninth rule is “The threat is usually more terrifying than the thing itself.” This rule was extensively used to threaten the government against taking any steps regarding the scrapping of Art(370) or building the Ram Mandir. The common narrative was if anyone tries touching Art(370) or build Ram Mandir, there would be bloodshed in the entire country. This was countered with great brilliance by PM Modi through his strong military posture in Kashmir and by Yogi through his stronghold on the law and order situation in UP. Yogi Adityanath was on a record in an interview where the interviewer asked him about the Ram Mandir situation (before the judgment) and the possibility of riots and bloodshed. Yogi Adityanath, without blinking his eye said, ‘Not even a mosquito would get impacted. There’s no scope of rioting in UP. If anyone wants to do such things, he should try other states’.

The tenth rule is to maintain constant pressure on the opposition, which has been fairly dealt with in the points above. The eleventh rule is “If you push a negative hard enough, it will push through and become a positive.” It deals with trying to incite violence from the opposition which would help to get the public sympathy in your favor. PM Modi countered this by using the bare minimum force of the state during the CAA and the Farmers protest. This is a good counter, however as discussed earlier, there should be a limit to this too. We should draw a line as to how far this can be stretched. At some point in time, it is important to show who wields the power.

The twelfth rule is- “The price of a successful attack is a constructive alternative.” The left always comes up with alternatives and clear demands when they are approached for a discussion. These demands may sound unreasonable but the left, however, uses them to show that they are willing for a compromise, but the opposition is not willing to cede anything from their end. The demands can be as unreasonable as releasing Maoists and terrorists to take the farmers’ agitation back. The solution for this is looking through their agenda and busting the myth of their constructive alternative and displaying the fault lines in their approach.

The thirteenth rule is- “Pick the target, freeze it, personalize it, and polarize it.” The left is currently using this strategy against the UP CM Yogi Adityanath. The left looks up to Yogi as a major threat and they have started attacking him personally by doctoring his videos and creating a complete polarization against Yogi Adityanath. This rule however has a drawback. The polarization by the left also triggers reverse polarization and the more the Left targets Yogi and Modi, the more non-left rallies behind them. The application of the thirteenth rule is itself a counter of the rule.

The Radicals and Panchamakkars in India follow these rules like a Bible and the counter to these rules has to be in the language they understand, but which is rooted in our Indic identity. We should not become like them in countering their ideology. We should create an alternate narrative and work on countering the ideology of the left. The counter for radicals is a necessity in the current times. Wherever necessary, we should speak to them in their language, but while doing so there should be a strong sense of confidence in our civilizational value. We should respond to them from the position of strength. We’ve initiated the process, but we still have a long way to go.