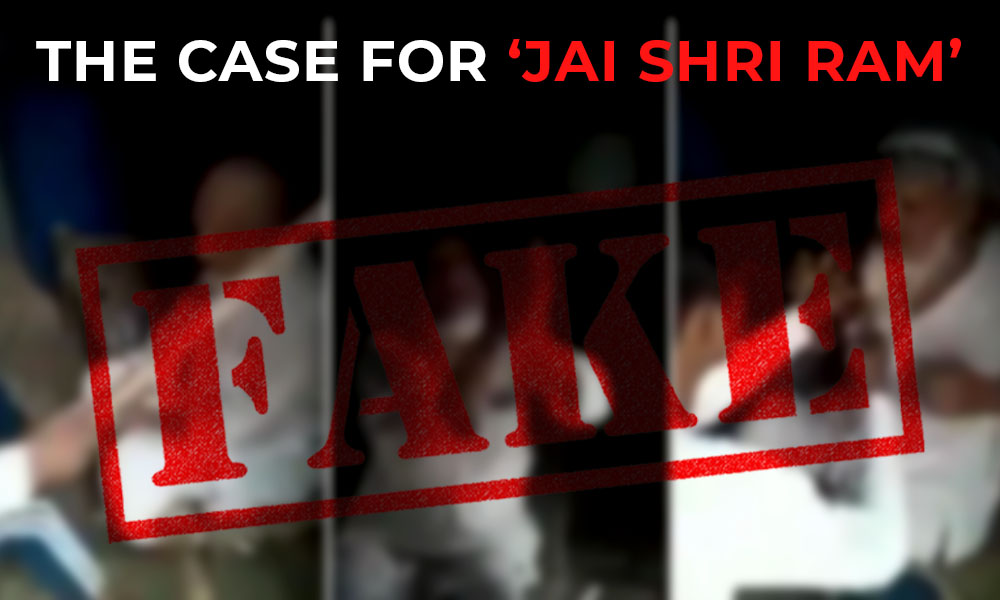 Recently a video from Ghaziabad went viral, where a Muslim man was allegedly forced to chant Jai Shri Ram. Although the video that went viral was mute, yet the liberal media went on to give a communal color to the story. These videos were shared on social media by so-called fact-checkers like Alt News co-founder Muhammed Zubair and several others of the Islamo-Left community namely Rana Ayyub, The Wire, Salman Nizami, Maksoor Usmani, Sama Mohammad, and Saba Naqvi. Zubair claimed that Abdul was forced to chant ‘Jai Shri Ram’ while he was getting beaten up. This ‘claim’ however turned out to be ‘fake’, as 3 out of 4 people in the video were Muslims, who were hitting the man to vent out their frustration of his fake Tabeez business.

This is, however, not the first time that the Islamo-Left gang has used the term ‘Jai Shri Ram’ to incite communal violence. There have been several incidents in the past where the liberal media falsely claimed ‘Jai Shri Ram’ as a cause of some local fight and tried to incite riots in other parts of the country. Muhammad Zubair after falsely reporting the incident went on to delete his tweets when an FIR was filed against him for the same. In response to this, the leftist cabal started trending ‘#IStandwithZubair’ to support the ironic cause of fact-checkers to report the news based on unverified data.

If we look at all these incidents closely, including the one where Sharjeel Usmani tweeted ‘’A Hindu chanting ‘Jai Shri Ram’ is most likely a terrorist’’, we see a common thread binding each one of them. The Islamo-Left gang has been trying hard to counter the narrative of Hindutva which has grown strong after the Ram Janmabhumi movement. To counter the narrative of Hindutva, the opposing camps are trying to target the very roots of the movement. By targeting the icons of Hindus, and falsifying the existence of Bhagwan Ram, they are trying to polarize the society (which is the 13th rule of the radicals) against Hindus and Hindutva. The Islamic Radicalism in India which has existed even post-partition is finding itself in a difficult position as Hindus have started to raise their voices against the injustice forced upon them by the State, and by the minority community which has always been expecting a special treatment. The Muslim Rashtriya Manch is one of the new appeasement techniques followed by none other than the RSS, which gives a tacit agreement to the claim of Jinnah and Syed Ahmed Khan that Muslims are a separate group and need a special treatment as opposed to Hindus.

By going deeper into the case, we can see that the people targeting Bhagwan Ram understand that he is not just an idol for entire India, but also the political icon of the Hindutva movement.

The Saffron flag that has been carried by the subaltern class and which emerged as an anti-thesis to the appeasement policies of the government has now risen to such heights, that it almost seems impossible to replace BJP in the center. Congress which has transformed itself into the new age Muslim League (as rightly claimed by Sanjay Dixit) is trying to turn more towards Radical Ashrafi Islam. While Islam is turning progressive in the core conservative societies like Saudi Arabia, Islam in the Indian subcontinent still tries to become more regressive day by day.

The case for ‘Jai Shri Ram’ is not just the case for Hindus, but the case for entire India. The campaign against the slogan of ‘Jai Shri Ram’ is an attempt to turn Darul Harb into Darul Islam. Defending Bhawan Ram is not just defending Hinduism but also defending nationalism. We must engrave the thoughts of Sri Aurobindo that “India rose with the rise of Sanatana Dharma and would die if Sanatana Dharma was allowed to die”. The targeting of ‘Jai Shri Ram’ is the first step of genocidal tendencies against Hinduism. The campaign against Bramhinism is not a campaign against the Varna structure, but the core tenets of Hinduism. Under the subtle garb of Brahminism, the left is trying to destroy the basics of Sanatana Dharma. The left is trying to demolish all the practices of Sanatan Dharma by claiming it to be either Bramhanical or Patriarchal. This campaign also has a long-term strategy that aims to defy the existence of Hinduism and portray Hinduism as Brahminism. This is a slow but steady movement towards a genocide, and if it is not countered aggressively, we might head towards the same in the next few years. Hinduism has survived one of the toughest times, but the situation is different presently. We must understand the strategy of the left and counter the narrative with great alacrity. The cultural Marxism works in two stages: War of position and War of maneuver. The selective targeting of Bhagwan Ram is the War of position, where they want to gain some ground and falsify others claims and impose their totalitarian ideology on the liberal (in an actual sense) Hinduism. After they’ve gained their ground, they move towards the war of maneuver where Hindus would be treated as Zimmis and the ‘Rajya’ will itself work against the ‘Rashtra’. Hindus must understand the language of the left and their motives behind using such words. We must defend the attacks on our liberal Ishwar against the totalitarian cults as described in great depth by Sitaram Goel. We must wake up and smell the coffee before it’s too late