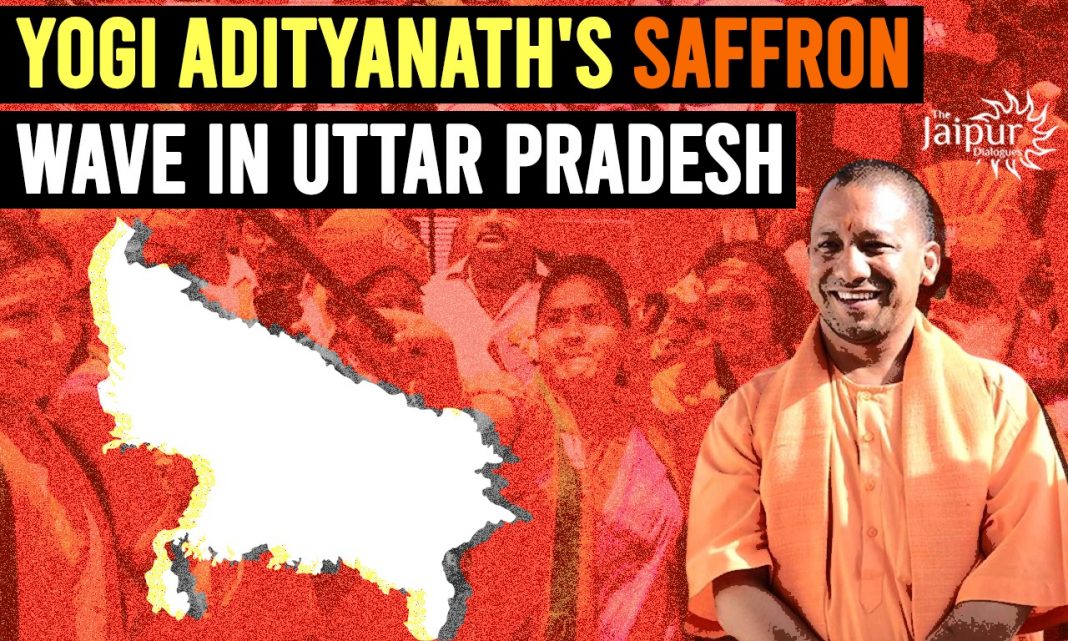 Uttar Pradesh verdict in 2022 has proven to be a massive game-changer, one which goes against the hate and caste based politics. Most importantly it has shown that the voice of the people matters and not of those living in Ivory towers!!

As long as the Liberals experience a meltdown, we should appreciate the fact that this is an indication that the BJP is sweeping the nation. Meltdowns are even more reliable than exit polls in this regard. The once media elusive and vilified saffron-clad monk named Yogi Adityanath has yet again emerged victorious in Uttar Pradesh, and in a way, even his haters thought was impossible.

Yogi’s coming to power in 2017 wasn’t only an unexpected move, but it didn’t go down well with many people. He wasn’t the popular choice but he proved everyone wrong on multiple occasions! Political pundits and naysayers have not only been proved wrong but also shown that the days of Lutyens media and intellectuals living in ivory towers are over. From the beginning, Yogi was an unwavering leader, with clear priorities. His statement of the truth was never vague, and fortunately for Hindus, he never fell victim to ‘Secularism’. This is a disease that many leaders succumb to after they have gained power.

People’s faith and trust in Yogi’s administrative capabilities have been vindicated by today’s election results, as well as his ability to fulfill all of His promises. India is a dynamic democracy where expectations are swayed. However, people can’t be blamed for this behavior, as the past governments failed to do much to facilitate building and carrying this trust forward. Yogi did, and the result is obvious. We no longer live in a time when people were kept in the dark and used as a resource by politicians through the ‘Freebie’ culture. Although Priyanka Vadra is still living in the past, Yogi Adityanath has driven the people from a forcefully imposed Slavic mentality and has made them understand their worth and importance, an indication of how they can reach the goal of achieving ‘Atmanirbhar Bharat’.

U.P. carries a unique political significance and weightage in terms of national politics, and the verdict gives a direction to national politics. Does this explain why Mamata Didi, who criticized Uttar Pradesh ke Bhaiyas just a few days ago in Bengal, was here in Kashi campaigning for Samajwadi Party chief Akhilesh Yadav and playing the Hindu card? There is no question that Uttar Pradesh is a state that carries a lot of political significance and, as a consequence, every politician — irrespective of state — awaited the results today to determine what strategy they would pursue in future.

Yogi is so popular for a reason, right? He understood the realities on the ground and was willing to reach out to everyone, and most importantly, despite being called various epithets by members of the elite media and his haters, he never wavered from his commitment to uphold Hindu values and to ensure that ladies feel safe in public. Remember how he handled those anti-CAA rioters in the state, justifiably? How could we forget what these barbarian Islamic rioters did in Delhi and the violence they had unleashed? If it were not for him, a bloodbath and mass murder would have resulted. Baba Ji has been able to achieve and sustain a multitude of results in Uttar Pradesh, starting with economic growth, employment, economic equality, law and order, a surge in academic opportunities for all, and, most importantly, maintaining a true and just system, unlike the one promoted and followed by the so-called Socialistic Parties of India. Since it was indeed a make-or-break election for them, all opposition parties went full throttle against the BJP.

Media portrays Yogi Adityanath as a quintessential villain, one who does not believe in following India’s secular credentials. However, the truth is completely different and that is intentionally hidden by those who have their own agendas and greed to satisfy. Communal politics are depicted as his specialty, but is this really true? In the past, Yogi Adityanath has maintained that he loves Muslims as much as they love him. Therefore, the question arises, where did he say that he hates Muslims, or what is the truth, deliberately hidden by the media from the public’s view?

Yogi Ji has demonstrated that politics can be done without fueling hate and to accomplish that, one needs to be decisive and an astute leader. Neither did he come from an established political family nor did he have any political legacy. BJP could learn from Yogi’s success that it always helps to have decisive, strong-willed, and able leaders who can see far into the future, unlike what happened in Uttarakhand, yet fortunately for BJP, voters in Uttarakhand have shown their faith in their model of governance. BJP’s election fortunes dramatically improved after Yogi took over as the party’s leader in 2017 and today he ended the 35-year political jinx of a CM being repeated in U.P., that too post completing a full term. Whether it is Behenji or Bhaiyya Ji or now, Yogi Ji, ‘Uttar Pradesh ki Janta’ has always been a decisive electorate that gave fair chances to all. The ball was in their court. Despite this, they conveniently chose to derelict their duties by appeasing communal groups, building parks in the name of infrastructure, and indulging in massive corruption. Who can forget the garlands made of currency notes worn by Mayawati on her birthday celebrations while in power or the massive and glamorous events conducted in Saifai by the Yadav clan or the scandalous ‘Tonti-gate’? The public was made a fool of because they sensed that the money that was supposed to be allocated for their welfare and justice was not only being misused but they were publicly ridiculed. These self-indulgent politicians who, in their own minds, were kingmakers got an answer in the language they understood from the public. But these fickle politicians, who always relied on caste and communal politics, never understood that the equations were changing, and the result is evident to all.