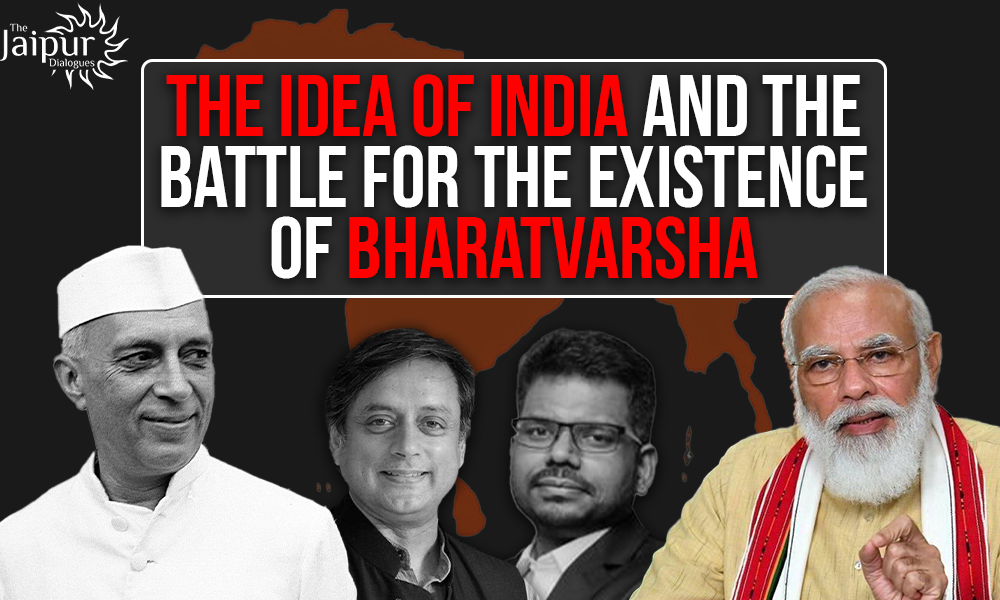 In a recent debate between J Sai Deepak and Shashi Tharoor, 2 distinct ideas of India emerged. On the one hand, Shashi Tharoor’s idea of India shows a limited understanding of our Shastras and a lack of Shatrubodh that follows the Gandhian legacy. On the other hand, Sai Deepak’s idea of India emerges from a strong sense of Indic identity which is rooted in its rich civilizational values.

What’s interesting is that while Shashi Tharoor’s idea of Hinduism acknowledges that Vivekanand preached tolerance, he willingly or unwillingly omits the fact that the same Vivekanand threatened to push a missionary into the sea for spewing venom against Hinduism. Shashi Tharoor, following the Gandhian tradition, projects a Utopian idea of tolerance and peace. But tolerance should be accepted at what cost? If we tolerate the intolerant, that ultimately leads to the end of tolerance. In this ‘Battle of Belonging’, Hindus should not fall for the fourth Rule of Radical which says “Make the enemy live up to its book of rules.” While the Radical factions from Muslim League used
this rule extensively on the academically weak people like Mohandas Gandhi and Jawaharlal Nehru to hold them to a restricted idea of Hinduism which preached अहिंसा परमो धर्म ( Non-Violence is the utmost duty), our scholars resisted pushing back by saying ‘धर्म हिंसा तथैव च:’ ( Protecting Dharma and using violence for its protection is equally supreme).

Mr. Tharoor craftily ignores the fact that ‘The Bharatvarsha’ which expanded from Sindhu to Seas has already been partitioned into two pieces by the Radical ideology of Political Islam. Sanjay Dixit in ‘Unbreaking India’ notes the views of Jinnah who said that ‘There would either be a ‘divided India or destroyed India’. The sad part is, Hindu Mahasabha, which had ideological clarity, lacked a popular mass appeal after the deteriorating health of Savarkar which gave an open space for Congress to negotiate with the Muslim League and get its share of Pie.

The so-called secularists who fasted for removing Hindus taking shelters in mosques after the partition, were mute when the Suhrawardy faction was raping women and when Razakars were killing Hindus at a mass level. Gandhi’s idea of India which was carried ahead by the Congress and which reflects itself in Shashi Tharoor’s ‘Battle of Belonging’ accepts Mughals as ours, because the British looted Indians, but Mughals stayed in India and made India their home, so ‘They became Us’. These idiotic claims for pushing Hindu-Muslim Unity by whitewashing the Dark Mughal history lead to falsifying Hindu Consciousness. Hindus were never taught about the real History, about the resistance against Islamic and European Invasions. Congress pushed for an idealistic idea of ‘Ganga
Jamuni Tehzeeb’ which never existed in reality. Congress Party back then and the Sangha Parivar now falls in the same trap that –British divided India, and before the advent of Europeans, HinduMuslims lived in peace and unity. Replying to such fictional history, Savarkar in his Calcutta speech of 1939 said ”They say, ‘before the British came, Hindu-Moslem riots were a thing unheard of’. Yes, but because instead of riots, Hindus-Moslems wars was the order of the day”

Savarkar along with Hindu Mahasabha had no wrong intention for Muslims. In fact what Hindus have strived for since the beginning is ‘Equality’. The Equality that is hailed by the ‘Constitutionalists’ is Minority appeasement that treats Hindus as Second Class Citizens in their State. Dr. Ajay Chrungoo rightly said that ‘India faces a unique situation where the Rajya stands against Rashtra’. The state of India has not accepted Hindu genocide in Hyderabad or Kashmir or Bengal. The state along with Pseudo Seculars has been sheltering the minorities irrespective of their crimes for maintaining the ‘Communal Harmony’. A leader like Gandhi who taught extreme Non-Violence was not ashamed in saying that there was nothing wrong in Moplah Genocide and that the Mohammedans did what was necessary according to their religion. The Gandhian Idea of India preaches to call Chattrapati Shivaji Maharaj and Maharana Pratap as Terrorists, Bhagat Singh as a ‘nationalist who lost his path’, but the Murderers of Swami Shraddhanand as ‘Bhai Abdul Rashid’.

This Perverted idea of India projected by the leftists, pseudo seculars, and Gandhians has already transformed all sorts of traitors into patriots and all sorts of parasites into public servants. This whitewashed history and the fear of being politically incorrect has provided a smoke-screen behind which several types of imperialism – Islamic, Christian, Communist, and Consumerists – are stealing a march. The love of country and its tried and tested culture has been turned into a cardinal sin by the poisoned phraseology of this political culture.

For being politically correct, closed creeds like Islam and Christianity which are not in accord with the spirituality of Sanatana Dharma are allowed to subvert India’s ancient spiritual heritage for protecting Secularism. An examination of the doctrines and histories of these creeds shows beyond a shadow of a doubt that these are political ideologies of imperialism masquerading as a religion. But the judiciary, with its colonial mindset, adheres to these Christian values and evaluates the Sanatana Dharma in accordance with those values, as rightly pointed out by J Sai Deepak in his book ‘India that is Bharat’. Under the garb of equality and secularism, ancient Indian practices are being subjected to the modern Christian discourses bringing in the idea of ‘Doctrine of Essential Practices’ that can never apply to Sanatana.

To overcome this, India needs to wake up from its colonial slumber & throw its cloak of political correctness. The fatal practice of Nehruism, which was a cocktail of Hindu hatred, Islamic exaltation, English imitation, Communist infatuation, and Socialist evisceration, has already taken away the vitality of independent India. India became politically independent, but never attained mental and cultural independence. This corrupted idea of India projected by the liberals would paralyze the country unless it is replaced by the idea of Indian nationalism rooted in the idea of Sanatana. As rightly pointed by Shri Sitaram Goel, The language of Indian nationalism has to be the language of Sanatana Dharma. The more Hindu society looks at the universal truth of Hindu spirituality and culture the more readily it will reject political ideologies masquerading as religion or promising a paradise on this earth.

The very word Hindu has been made a dirty word in post-independent India. The one identifying as a Hindu is branded as a narrow communalist, an obscurantist, a reactionary. There is no such stigma attached to being a Muslim or a Christian. But a Hindu who aspires to be respectable in the eyes of the ruling elite has to subscribe to Secularism, the new cult floated in the Post-Independent India. It’s about time that we reject this colonial mentality and pseudo-secularism and subscribe to the idea of Indian Nationalism as preached by Savarkar. For Bharatvarsha to survive, it has to base itself on its civilizational values. The corrupted idea of Hinduism floated by Gandhi has already destructed India politically and territorially. Now is the time we introspect before it’s too late.