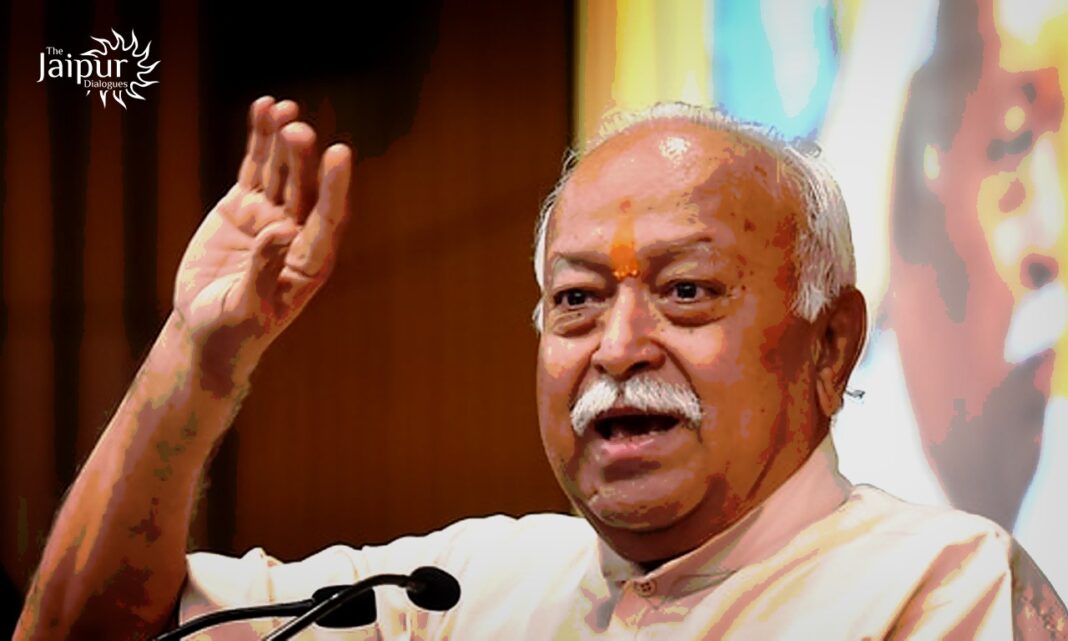 The Qur’an says: “O Prophet, tell your wives and your daughters and the women of the believers to bring down over themselves of their outer garments. That is more suitable that they will be known and not be abused. And ever is Allah Forgiving and Merciful.” (33:59)

Indian politicians are naturally ignorant and oblivious, especially those who used the plank of Hindutva to gain power. While the RSS and BJP used to raise their voices primarily on behalf of Hindus, the tables have now turned, unfortunately. Both sides have stifled Hindus by throwing their faith and trust away, which has emboldened Islamists’ nefarious actions. Hindus are unwilling victims of Islamist hatred because of the confusion created by the BJP and RSS on secularism and universal brotherhood. As a result of the lack of any substantive action or steps, Muslims continue to commit horrific crimes unabatedly. 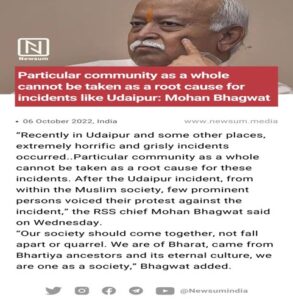 In the image above, it’s clear the statement is a blatant outreach, an effort to pacify those people, who will always be against them. Muslim fanatics, in general, will remain faithful to their beliefs irrespective of any measures. Such statements, if nothing else, provide an opportunity for Muslims to cover up their hate-filled and vitriolic actions.

These actions aren’t just confined to Udaipur or some small pockets; they happen across the country. Increasing cases of love jihad, land jihad, and Sar Tan Se Juda murders indicate that Muslims are concerned only about ‘deen’.

Mohan Bhagwat Ji, RSS Sanghchalak, has conveniently forgotten these incidents or, if not forgotten, prefers to live oblivious to them. Deliberate incursions by Muslim youths during our festive events demonstrate their deliberate ill intentions. What does participation in Garba or Dandiya events signify for Muslims who do not believe in our festivals and practices?

It is these people who interfere and vitiate the atmosphere by engaging in cheap and distasteful activities. This just exposes their dirty and perverted mentality, but all of that stems from the underlying cause of promoting love jihad. During a Garba event in Bikaner, Rajasthan, some of these fanatic Muslim youths attacked a Hindu boy.

Madhusudan Modi was brutally attacked and stabbed by three Muslim males, Shahrukh, Zubair, and Sameer, for resisting the molestation of girls. They were molesting and harassing Hindu girls at a local Garba event in Bikaner. As Madhusudan saw this and raised his voice to defend the girls, these fanatics attacked and critically injured him. Muslims have been taught to use Kafir women as sex slaves, and this is an indication of their madness to promote the Hijab and Burka for women. Most young Muslim men believe that only Muslim women deserve respect because they cover themselves with a burka or a hijab. Shahrukh, Zubair, Sameer, and others have been invigorated by the perverted concept of Kafir women roaming scantily dressed and “asking for it”.

All these incidents should serve as a wake-up call for secularists who promote secularism blindly without considering the consequences. Hindus have been forced fed secularism for decades, and the results are evident. Politicians need to understand that times are changing, the sooner the better.