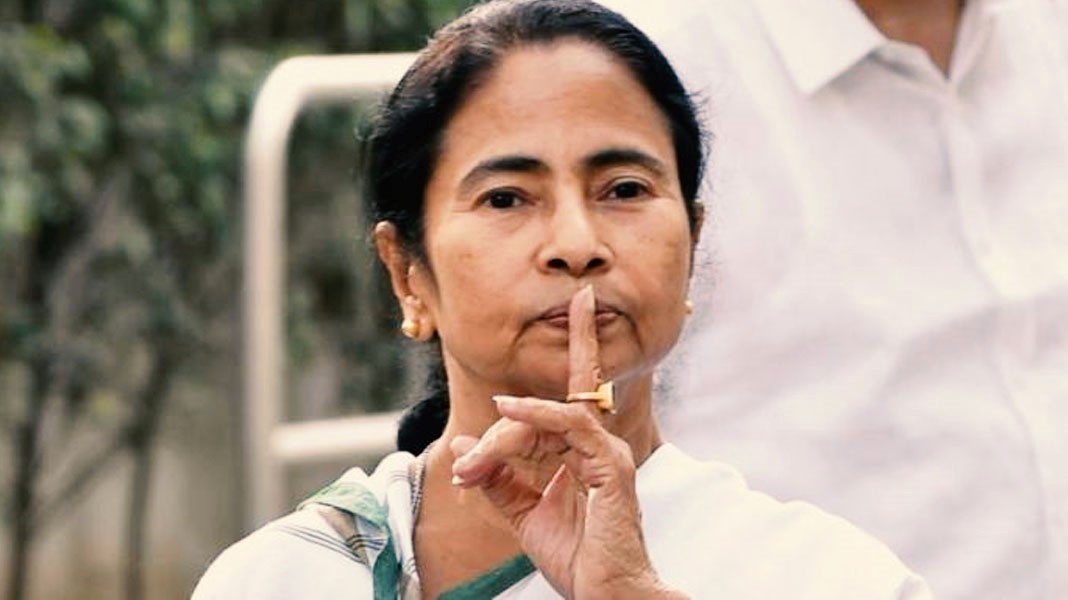 The name and chants of Lord Rama are incredible. On the one hand, it helped in the creation of a bridge to Lanka, while on the other, the same name was responsible for the drowning of TMC in the Bay of Bengal. The name of Rama is powerful, and no one would be realising the power of this name more than the TMC Party which seems to be looking at a grim future post the 5th phase of elections. ‘Jai Shree Ram’– These are the 3 words that summarise the downfall of Didi.

Some leaders can sense the ground reality and decide their political program based on the direction in which the wind is moving. On the other hand, there are some leaders, who never leave their AC rooms and decide the political program by consulting just a handful of consultants without having the actual ground connect. Mamta Banerjee fell in the former category up till 2016. She was successful in driving out the Left from its bastion ending the famous or infamous 34-year rule of the Communist Party in Bengal in 2011, and also won the 2016 election single-handedly with 211 seats.

However, as the elections of 2019 approached, a completely disturbed Mamta Banerjee was seen in the picture. It was visible that Mamta was fearing something. The Modi wave was in its full form and ‘Jai Shri Ram’ became a war cry for the oppressed Sub-Altern classes who were kept on the margins by the ruling Parties of Bengal

In the recent Clubhouse leak incident of Prashant Kishor, he admitted that in Bengal a certain type of appeasement policy was carried out by the Left initially and later by Mamta Banerjee, which in turn sidelined the Hindu population. He was also seen to admit that the Hindu population had mobilized against TMC on the same point of contention. The idols from previous years which were stopped from the Visarjan process for the Muharram procession seemed to ensure, that this year, it is not just the Durga idols that would be Visarjit.

In the first 5 phases of the election, the fate of 180 constituencies is already sealed and as per the ground reports and the increasingly confident body language of BJP leaders, it seems that BJP is gaining a lead in Bengal. It has managed to hold on to its forts and at the same time making inroads in the TMC bastions. The Bengali Population is progressively displaying since 2019 that the Bhadralok can’t decide the future of Bengal, it is the subalterns who have the numbers and they want to have their stakes in the system. The ‘Jai Shree Ram’ slogan gave them the required self-confidence to come out in open and display their Hinduness without being apologetic about it. ‘Jai Shree Ram’ has not just been a slogan to mobilize Hindus, but it turned out to be a war cry for resistance, for opposing a certain kind of politics. The Bengal election is increasingly seen large-scale mobilization of Hindu vote and especially SC-ST vote, which was a very rare phenomenon in the Indian election process.

The state of Bengal over the years has had a curious electoral history from groups to clubs to syndicate raj to violence, and the voter mobilization is seen as a revolt against the tyranny of the Syndicates in Bengal. The voters which were oppressed in the state and were deprived of their democratic right to vote, seem to be voting for democracy against authoritarianism this year. The memory of the recent Panchayat elections is still very fresh in the minds of people where they were not allowed to go out and vote if they were seen to be of the opposite camp. TMC which won around 34% of the seats uncontested created a negative light in the minds of people. This built up to the popular expansion of BJP in 2019 and the increasing popularity in 2021

The Sitalkuchi incident highlighted the menacing situation of political killings in Bengal. After the ‘Khela Hobe’ & ‘Bahiragot’ plan backfired, violence was seen as a last desperate attempt to hold on to power. Didi was offensive in the initial phases taking on the mighty BJP but was seen to be on a defensive side in the upcoming phases in terms of her strategy and resorted to non-political options for victory. With the reducing crowd, it was seen that it was BJP who was being successful in building a narrative in Bengal.

Nonetheless, there are still 3 phases of the election left in Bengal, there are still 114 seats that are about to go to the polls next week, it is too early to call the shots. Having said that, it is also evident that the BJP which managed to create momentum in its favor in the first 2 phases, has managed to carry it up to the 5th phase. There seems a strong undercurrent in Bengal for BJP. Although the BJP does not have any local leader, people of Bengal and especially women see Modi as someone magical who would change the future of Bengal. The rallies suggest that the people of Bengal see hope, they want to vote for positive issues, they want their vote to be counted.

From ‘Jai Shree Ram’ to ‘Didi O Didi’ to ‘Khela Shesh’, the assembly election of 2021 has seen a wave in the favour of the Saffron party. However, the major issue in predicting the outcome in the wave situation is that you never know where the high tide would end, and where the low tide would climax. 2nd May is not far enough to see whether the Insider vs Outsider narrative got the minds of the voter or the voter believed that BJP has the power to do ‘Khela Shesh’ of TMC. Whatever may be the outcome of the election, one thing is clear, Bengal which remained isolated from the rest of India in terms of its politics has converged with the heartland states. The day is not far when even the CPI would feel the need to chant ‘Jai Shree Ram ’. Didi miscalculated the reach of Ram, the over-reaction against the Rama slogans might just have cost her the election.