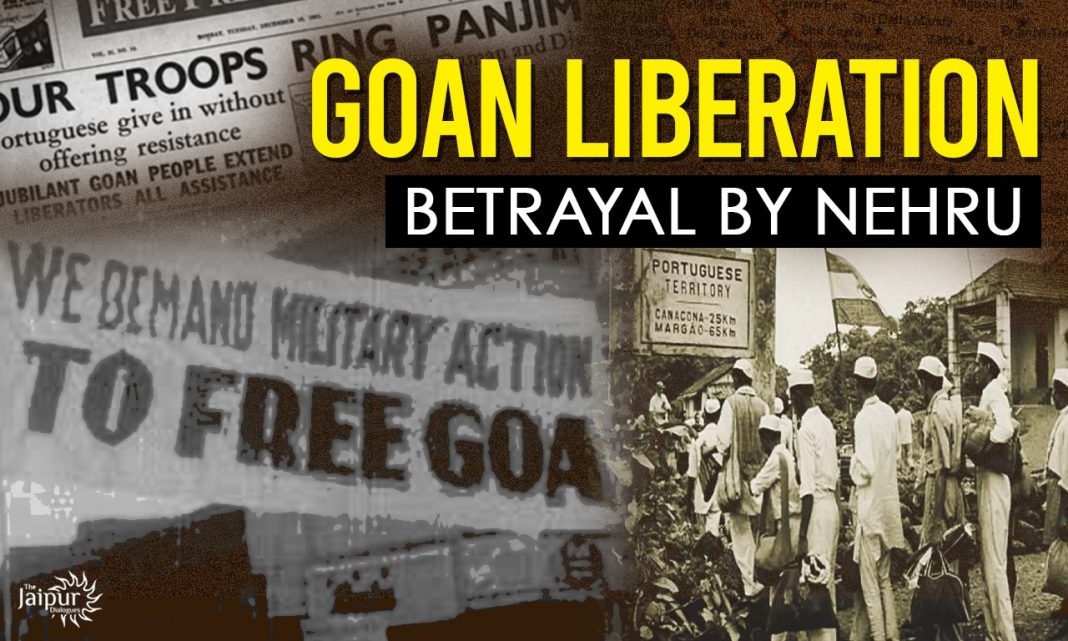 “Goa is sadly famous for its Inquisition, which is contrary to humanity as much as to commerce. The Portuguese monks deluded us into believing that the Indian populace was worshipping the Devil, while it is they who served him.” – IS- Voltaire

The thought of Goa automatically elevates one’s mood. The idyllic setting of Goa is loved by foreign visitors as well as native Indians. All of these picturesque locales, happy people, and enthusiastic culture, however, have a tragic history. India gained its independence in 1947, but for Goa, it was December 19, 1961, after 451 years of Portuguese rule. Goa was one of three Portuguese colonies in India, the other two being Daman and Diu. The three territories were captured by India in 1961 and freed from the tyranny of the Portuguese.

Back in December 2021 PM Modi stated, “This year as we celebrate sixty years of Independent Goa, I want to say, had Sardar Patel been allowed to frame a policy for Goa like Hyderabad or Junagarh, Goa would not have to wait after fifteen years of the Indian independence to liberate itself.”

There’s no doubt that Nehru had nothing but despise and disregard for the satyagrahis who struggled hard for Goa’s liberation. Nehru always tried to carve a ‘holier than thou’ personality of his, by putting at stake the national interests. Nehru wanted an untarnished image and that’s why he didn’t use force to occupy Goa, which rightfully belonged to India. It was due to Nehru’s administrative inadequacy and incapability that freedom fighters of Goa, had to bear the brunt of Portugal rule for 15 more years.

Inquisition was started by Pope Lucius III in 1184 CE, the Goanese Inquisition is a dark blot in Indian history. It is infamous as it was aimed at torturing, harassment and brutalizing and for persecuting ‘non-believers’. It was in 1545, the Jesuit ‘saint’ (Yes a saint!!) Francis Xavier wrote to his Roman masters requesting the Inquisition of Goa. The same Saint whose physical remains are kept in a famous church in Goa and thousands of ignorant Hindus pay respects to him. That’s sad and disturbing to know that how conveniently Hindus have been brainwashed. Sadly they have been made to forget the brutalities inflicted upon them and are encouraged to worship the one who instigated it. The Goanese inquisition was finally implemented by the Portuguese colonizers in 1560 and lasted until the year 1812. Innumerable people were burnt, tormented or murdered using various methods– most of them native Hindus. Discussion of this is now considered taboo due to the current political climate. A man who despised Hindus and invited colonizers to commit atrocities against them has been declared a ‘saint’.

It is unfortunate, that many Christians in Goa find their affinity with the Portuguese rather than with their motherland. They have forgotten the brutal history of persecution their ancestors underwent where they were forcibly converted.

Nehru wanted to use diplomatic channels to further the cause in order to protect and advance his image as a peace-loving global leader. On December 11, 1961, after realizing that Nehru’s diplomatic maneuvering with his allies failed. His close aide VK Krishna Menon made the decision to send the army to Goa.

Menon made the sudden decision to use the army because he was running against JB Kriplani in the 1962 Lok Sabha elections from North Bombay. His plan to capture Goa paid off, as he won the elections by defeating Kriplani. It must be understood that it was Menon, not Nehru, who worked to assist Goa’s freedom fighters.

It has to be understood that Nehru seeking constant validation from the western nations, did him especially India, no good. On February 27, 1950, the then-Nehru-led government requested that the Portuguese negotiate over the subjugated territories. However, because of white supremacy and dominancy, they asserted that its territory on the Indian subcontinent wasn’t a colony. They claimed that it was a part of metropolitan Portugal; hence its transfer was ‘non-negotiable.’ They went on to say that India had not been a republic since the time they had captured Goa.

The Portuguese capture of Goa dates back to Adil Shahis reign. Post India’s independence, Portuguese ruled the territories of Goa, South Konkan, and Daman and Diu for about 450 years. Rajmohan Gandhi, Gandhi’s grandson, described in his book a meeting between top leaders concerning Goa’s situation in 1950. “With tightly closed eyes, Patel was hearing all the points which were being made. He rose up to interject suddenly and said, “Want to enter Goa, it’s a matter of mere two hours”. However, Nehru was to decline this proposition and Patel did not interject thence.”

Nehru, being the best at what he did, did not allow the army to free Goa from foreign rule. He also openly opposed other Indian revolutionaries who wanted to join the Goa liberation. The following newspaper excerpt explains how the AICC actively prevented the Goan inquisition. It read, “Any entry into Goan soil by Indian Nationals will be inappropriate and even individual Satyagrahas should be avoided”. All this was done deliberately at a time, when the efforts of the freedom fighters were bearing fruits.

Although Nehru wanted to use diplomatic channels first, why did he pander to foreign forces so much? For a matter that concerns an Indian territory, why should an independent nation seek support from other western nations? Why did he muzzle the voices of Indian freedom fighters in Goa?

Indian Air Force bombed the Dabolim airport because of the bold initiative by former Defense Minister Menon. The Indian army entered Goa on the 18th and on the following day from the south. The Portuguese army surrendered as a result of the brave efforts of the Indian forces. However, even after so much diplomatic pandering, Nehru’s efforts didn’t pay off. Following the successful acquisition of Goa by the Indian army, many European nations, the USA, China, and the UK targeted India. As expected, these nations targeted India in the UN to stop the Indian army’s operations in Goa. Due to their innate hatred towards their former colony, the West did not spare any effort to damage India’s prospects. It was, therefore, pure political naiveté on Nehru’s part to expect help or support from the Western nations.

It’s not surprising that Nehru’s administration and governance failed India and Indians, on numerous occasions. We ceded our part of Indian Territory to China because of his ‘political expertise’ (pun intended!)- Aksai Chin. Our nations’ strategic interests have been compromised by Congress on more than one occasion: the 26/11 attacks, the Commonwealth scam, etc. Nehru clan has collectively failed Hindus on numerous fronts, and Hindus need to understand this. Every political party should understand that their own interests cannot trump the interests of citizens. Likewise, the people of the nation should realize what is good and in their own collective interests and not be gullible to the claims of others.