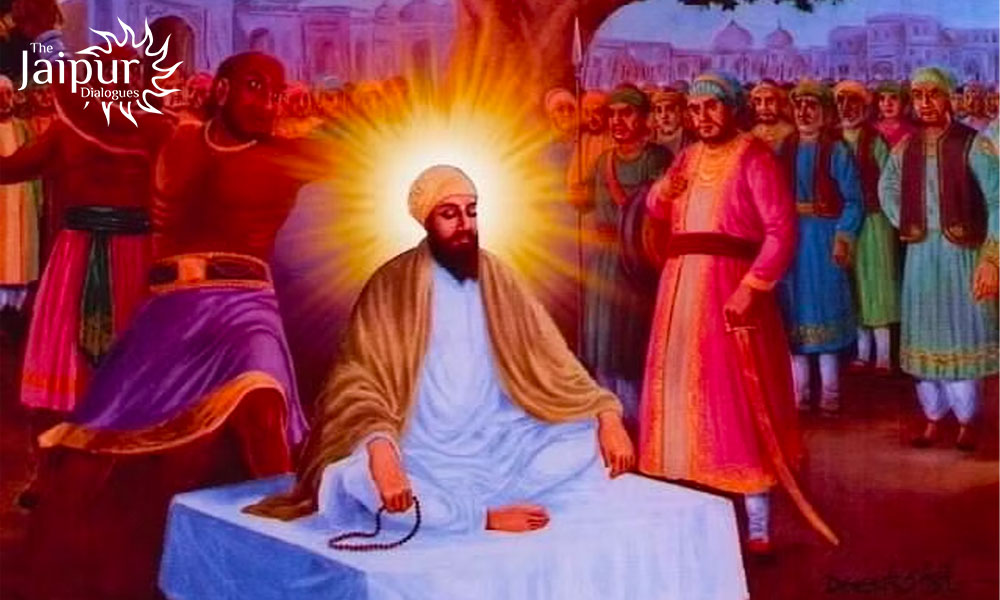 An ideal leader, a pure hearted soul and a ” guru” is the one who teaches the foremost qualities of fearlessness and freedom. There are many bondages in one’s life, and they are meant to create sufferings,until you persist on overcoming them. To guide through that persistence, is a Guru. And such was, Shri Guru Teg Bahadur ji, who was the 9th guru in the Sikh tradition. He lived a life devoted to desh and Dharma, and his legacy continues to give the same message.

Guru Teg Bahadur was born in Punjab’s Amritsar in the year 1621. He was the youngest son of Guru Hargobind who himself was the fifth guru of Sikhs. His mother was Mata Nanaki. His education was taken forward by Bhai Buddha, and was given training in archery and horse-riding. Bhai Gurudas gave him the education of scriptures. Thus, he was well versed in all kinds of philosophical ideas and martial arts. His devotion and dedication towards higher goals of life enabled him to become the 9th Guru of the Sikhs.

His work as a poet also gets recognition, where 115 hymns or “sabads” written by him are included in the holy Guru Granth Sahib. He travelled and went to different pilgrimages in different parts of the country, including Assam and Dhaka. Since he did not have a son for so many years, Guru Teg Bahadur along with his wife Mata Gujri worshipped in many pilgrimages. Later, his sone was born, who was the tenth Guru, Gobind Singh ji.

He became Guru in the year 1664.He had to face some opposition while succeeding as the 9th Guru after 8th Guru Harikrishan’s death at the early age of 8. Guru Harikrishan’s elder brother Dhirmal wanted to get to the position but when Teg Bahadur ji became the Guru, Dhirmal’s followers fired a rifle on Guru Teg Bahadur to kill him. This was a great disrespect done to the Guru. However, nothing happened to Guru Teg Bahadur.Eventually, Dhirmal’s property was seized and Guru’s followers took away the original copy of the Guru Granth Sahib from him and handed over to Guru Teg Bahadur. But, due to great benevolence of Teg Bahadur ji, everything was given back to Dhirmal and he was forgiven. This episode in his life shows that the light of Guru is above all discrimination and guides through the path of darkness.

Martyrdom For The Cause Of Dharma

It was the period of rulership of the cruel Aurangzeb. He being a fanatic and a staunch Islamist, was barbaric and cruel to anybody who used to follow Sanatan Dharma or ever stood against Islam. During the war of succession of the Mughal throne, Guru Har Rai had supported Aurangzeb’s brother Dara Sikoh and had sent his 2 thousand horsemen to help him escape. However, Aurangzeb had killed his elder brother and ascended the throne, but he could never forget the help given by the Guru to his brother. And it is well known, that Dara Sikoh was a follower of Upanishads and had great erudition in Dharmic scriptures.

Emerging power of Sikhs and their devotion for saving the down trodden who were affected by the Islamic brutality, alarmed Aurangzeb. And therefore, once while travelling with his horsemen, Guru Teg Bahadur got arrested by Mughal generals in the year 1664. And many false accusations of plundering were made against the Guru. However, he soon got freed due to the intercession of Raja Ram Singh ji, who had agreed to keep Guru in his personal custody, but eventually let him escape. This is a matter of alliance and union of a Hindu Raja for a Sikh Guru, where both of them wanted to save Dharma.

But 10 years later, fate had to take a different turn. A delegation of 16 Kashmiri Brahmans led by Pandit Kripa Ram Datt approached Guru Teg Bahadur on 25th May, 1675 and requested him to protect their Dharma in the land of Kashmir where they have been persecuted and made to surrender before Islamic cruelty.

And Guru Teg Bahadur agreed to the help, and heralded, that if Aurangzeb is able to convert him to Islam all the Kashmiris will also convert to Islam.

Some people or the modern Sikhs can call it a sacrifice done for some other faith. But for Gurus, Dharma was supreme, and there was no demarcation between Sikhism and Hinduism. At this vantage point, it is very important to imbibe the values of what the Guru’s showcased from their actions and understand that Sanatan is the Banyan tree under which each and every being has a comfortable shelter. To maintain the sanctity, eternity and purity of this Banyan tree many great personalities have sacrificed their lives, but their atmas remain eternal and we need to keep them in our memories and inspiration.

Did ‘Their’ Guru Tegh Bahadur Save ‘Our’ Hindu Dharma?