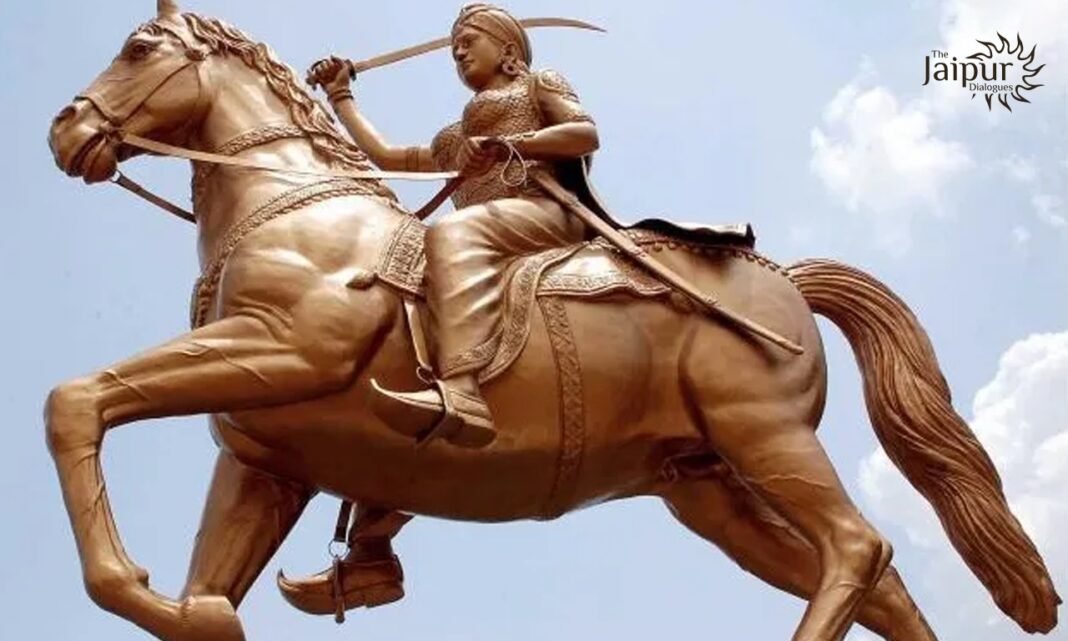 In the year 2021, a rare portrait sculpture of a lady worshiping the deities was found in a village of Khammam District of Telangana. This sculpture is one of its kind and dates back to 13th century. What is special about this archaeological discovery is that, that the artefact belongs to Rudrama Devi of Kakatiya dynasty. She is a queen who ruled the then Warangal state of Kakatiyas. The sculpture is found in the premises of Sangameshwara Swamy Temple that was built in Rudrama Devi’s rule.

Rudrama Devi’s story is a forgotten tale of a strong queen who won over her enemies and made sure that her legacy goes on.

The rule of Kakatiya Dynasty expanded in the present day Andhra Pradesh and Telangana. Their capital was the city of Warangal. The city’s earlier name was Orugallu which means one black stone boulder, which over time became Warangal. They were earlier the feudatories of the Chalukya kings. This was the time when Islamic invaders had started to enter the north western parts of Bharatvarsha. Around 1163 CE they threw off the yolk of Chalukyas and heralded themselves as independent.

Rudramma was the elder daughter of Ganapatideva along with another daughter Ganapamba. Because he did not have a son, Ganapatideva chose his elder daughter as his heiress. At the age of 14 she was declared the queen and ruled conjointly with his father for almost 3 years. Various inscriptions depict that she had started to rule independently from the year 1261.

In the years 1266 and 1267, she lost both her father and husband respectively. It was a huge blow and an unbearable grief to her life. For her, that moment was unbearable and bleak, which even made her to think about leaving her body at the alter of death.But the nobles and ministers of the State persuaded her to live along and save the country. She was officially crowned in the year 1269 AD.

This shows the immense strength she had to rise above her personal grief and dedicate her life for the good of her subjects. This is the inherent quality of a great leader and ruler.

However, she had to face friction from some factions of the nobles, because she was a woman, but she overcame all these adverse situations through her exceptional intelligence.

She ruled by defending the borders of her state from Pandyas and Cholas from the southern part of the peninsula. She ensured that some nobles like Hariharadeva and Murarideva  who had revolted against her ascendency, are kept at bay. However, at her side were great supportive nobles like Jaganni Deva and Gona Ganna Reddy. During the time of internal strife and attack from an external enemy, these nobles supported the queen in the best possible way.

Eventually, she had faced the biggest threat from the Yadavas of Devagiri. She defeated the Yadava king Mahadeva Raja who tried to invade the fort of Warangal. To defeat him, she crossed the Godavari River and claimed her rights over the Yadava lands by defeating them in the battle. This made the Yadava king to form a peace accord and gave a lot of money and wealth to the victorious queen. Rudrama Devi proved her efficiency in the matters of war and peace through her vision and military skills. She ensured the protection of her land proving the military might by capturing important forts like Mulikinadu, Renadu, Eruva, Mutthapi Nadu and Satti.

Rudrama Devi was a great worshipper of Shiva and Bhadrakali. She maintained the rule in the most harmonious way. She chose her grandson Prataprudra as the successor of her throne.  Living an austere life she made sure that the prosperity and fame of her land grows manifold. Her times also developed the Warangal style of Temple architecture. Her contribution in the history of India has been overlooked by the mainstream historians but undoubtedly, she stands as one of the most outstanding rulers in the medieval times.

Apart from that, there is no clarity over the cause of her death. There was a probability that she died during a war against the rebel lord Ambadeva. However, the army of Warangal won that war, but Rudramadevi lost her life while fighting, in the year 1295.

Her glorious life finds mention in the memoirs of the Italian traveller Marco Polo, who had visited Warangal during Rudrama Devi’s rule in the year 1289. He observed her administration and the condition of the people of the city, and was astonished to see such a streamlined system and prosperous citizens.