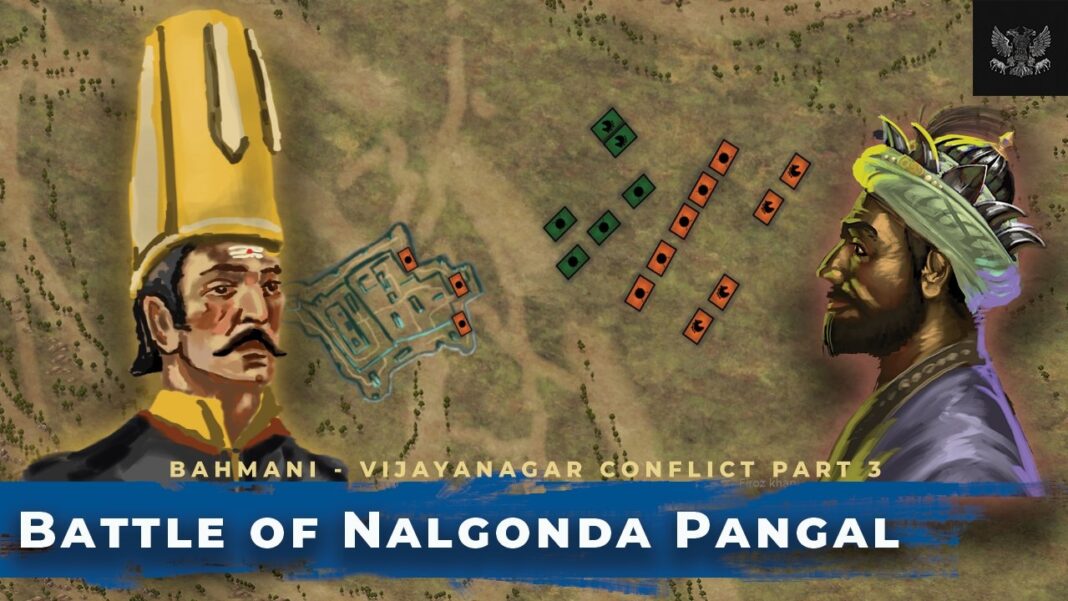 The Battle of Nalgonda Pangal took place in 1419 and was fought between the Bahmani Sultanate and the Vijayanagara Empire. Vijayanagara was headed by Deva Raya I whereas Firuz Shah Bahmani headed the opposing troops. 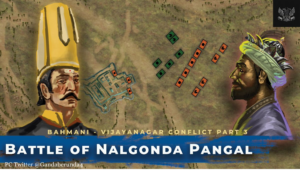 Deva Raya I was at war with the Gajaptis of Kalinga, the Velamas of Telangana, the Bahmani Sultan of Gulbarga, the Reddis of Kondavidu, and the Bahmani Sultan of Telangana for his whole reign. Deva Raya I was able to manage the enormous region he commanded by enlisting experienced Turkish clan archers and increasing the combat power of his bowmen. Following a squabble in the Reddi kingdom, Deva Raya I formed an alliance with Warangal in order to divide the Reddi kingdom. The Warangal split shifted the balance of power in the Deccan.

Prelude to the Battle of Nalgonda Pangal

Ferishta, a Persian writer, tells an intriguing account about the monarchs’ love for a lovely lady, the daughter of a goldsmith from Mudugal in the Raichur area, which is neither repeated or corroborated by any other contemporary source. Unable to marry her, a dissatisfied Deva Raya I stormed Mudgal and destroyed several villages. As a result of this provocation, the Bahamani Sultan Taj ud-Din Firuz Shah Bahmani attacked Vijayanagara. Again this prelude is not verified anywhere other than Ferishta’s account.

Ever since the founding of the two empires, Bahmani and Vijayanagara got into many conflicts and wars, with each one being victorious at different times. After ruling for a year and removing Moors from Coromandel coast, Immadi Bukka Raya was succeeded by his brother Deva Raya I.

Since the war with Immadi Bukka in 1398, Firuz had fought many wars with the neighbouring kingdoms, starting with Narsingh Rai of Kherla, who had supported the rebellion by a few Amirs of Bahmani Sultanate. Narsingh marched with his army to Ellichpur and fought with Firuz’s army but surrendered with a peace offering after his son was taken prisoner. 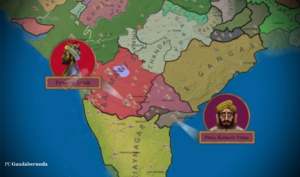 This is around the time Deva Raya I had attacked Mudgal and Firuz Shah was seeking to retaliate. He found his ally amongst the divided Reddy Kingdom. Prolaya Vema’s grandson Kataya Vema ruled from Rajahmundry while Peda Komati Vema ruled from Kondaveedu and it was the latter who chose to help Firuz. 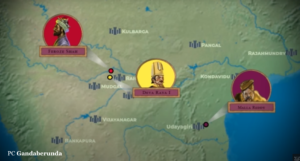 To counter these advances, Deva Raya centred his forces in the Doab and Firuz Shah could only march up to Bhanur and Muslakal. Firuz Shah’s progress into the Vijayanagara Empire was stopped by Deva Raya and he was compelled by Deva Raya to retreat.

Bahmani’s Invasion of the Reddy Kingdom

The Velamas and Annadeva Chola and Peda Komati on one side, sponsored by Firuz Shah, and the Reddys under Kataya Vema on the other, backed by Deva Raya I.

The Sultan sent his entire army against the Reddys, so Deva Raya despatched men to assist Kataya Vema, who was slain in the combat with Velamas near Ellore. Anadeva Chola used Vema’s death to his advantage, defeating Vijayanagaraaa soldiers in Attili, Kankarapati, and Rajmahendry.

Alladi Reddy, a Kataya Vema officer, quickly put an end to Firuz’s success by defeating Bahmani soldiers led by Ali Khan and forced him to retrace his advances. Deva Raya conquered the stronghold of Nalgonda Pangal and cut off connection while Firuz Shah was engaged with Reddys.

Alarmed Firuz Shah halted his efforts in the Godavari delta and moved quickly to Pangal Fort. Despite stiff opposition from Deva Raya, he won the fight and laid siege to the fort. The siege lasted two years, and Firuz Shah was no closer to conquering it than the defenders were. The Velamas were still Sultan’s friends, however, Deva Raya I achieved a huge diplomatic triumph, forcing the Velamas to desert the Sultan and join him instead. Deva Raya recruited more men and marched against the Bahmanis to relieve the fort of Pangal. A massive fight erupted in front of Pangal’s fort.

While the Bahmanis fought Raya’s soldiers, the garrison from the fort sallied out and attacked the Bahmanis. Khan I Khanan was hurt, and Inju died. Firuz Shah escaped with only a few men. Deva Raya massacred all of his opponents. On the battlefield, Vijayanagara troops built a platform out of Bahmani skulls. He then chased the Sultan into Bahmani country. The forces of Vijayanagara also took Chaul and Dabhul. Seeing this opportunity, the Velama invaded Firuz Shah and conquered Medak. Firuz Shah sought assistance from the Sultan of Gujarat, but received none.

Finally, after much struggle, Khan I Khanan forced Vijayanagara forces to leave the Bahmani territory. Peda Komati, Bahmanis’ lone ally, was assaulted and slain by Alladi Reddy and the Velamas. During the following confusion, Deva Raya expanded his domains. Alladi Reddy then defeated and murdered Annadeva chola, thereby terminating the final Bahmani ally. These setbacks permanently damaged Firuz Shah, and he died as a result. Deva Raya I and his supporters became the most powerful force in the entire subcontinent.