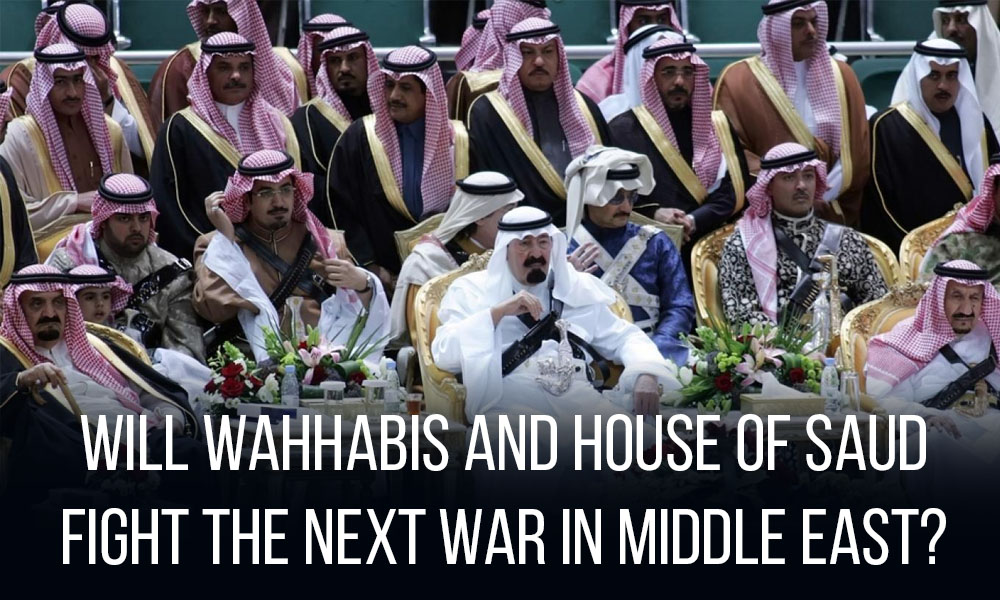 The House of Saud let loose the Wahhabis on the world stage after they got into oil wealth in the seventies. Till then, the Nejdis had ruled the Eastern areas of Khaleej and Western areas of Hejaz by appeasing the hardline clergy, who in turn had supported the House of Saud through thick and thin from the times of Muhammad ibn Abd-al-Wahhab and Muhammad bin Saud. They came together to consolidate the kingdom of Diriyah in 1744. From that time to the sack of Mecca in 1803, their defeat by the Ottomans in 1813, and the final conquest of Mecca in 1924, this compact has endured.

The basic feature of this compact was simple — The Saud monarchs would stay loyal to the puritan brand of Islam propagated by Abd-al-Wahhab, and Wahhabis would provide the religious legitimacy to the House of Saud, over and above the Ottoman Caliphs. In a way, it was a parallel Caliphate that challenged the Ottoman Caliphate. One would wonder as to what the Khilafat movement was all about when it never took up the issue of Saudi capture of the Hashemite Mecca. Instead, the Allied powers let Saudis occupy Hejaz along with the holy cities of Mecca and Medina and banished the Hashemites to Jordan and Palestine. Allied powers had their own interest in exploiting the newly discovered black gold on the back of a friendly power, and Saudis wanted to be the Prima Donna among the Arabs.

Given this background, it is easy to see how the modernising drive of the Crown Prince Muhammad bin Salman (MBS)is going to unfold. Does anyone remember the siege of Mecca in 1979? Back then, the Saudi monarchy was accused as not truly representative of pure Islam. Osama-bin-Laden, Al Qaida, and ISIS are all products of this primordial impulse of atavistic Islam. Saudi monarchy has funded strife in other places to provide an outlet to the Wahhabi energies, laying waste a huge area in the Middle East, and losing out to the arch enemy, Shi’a Iran in terms of strategic footprint. USA stood with Saudi Arabia through thick and thin, clobbering Iran from time to time, but it had to reconcile with the reality. USA signed an accord with Iran, mainly because of its disastrous intervention in Iraq at the goading of Saudi Arabia. The pigeons are now coming home to roost. I have no doubt that the complex interplay of the forces represented by Shi’a Iran, its allies in Yemen, coupled with forces antagonistic to the modernising and fratricidal zeal of the Crown Prince of Saudi Arabia have the potential of bringing this conflagration right into the heart of Saudi Arabia.

The Crown Prince has already broken certain rules of engagement. Never before has a Crown Prince been deposed by force. Muhammad bin Salman accomplished that. Ever since King Abdul Aziz ibn Saud unified Nejd and Hejaz in the Kingdom of Saudi Arabia, this has never happened. The House of Saud has expanded organically, but their internal tensions have always been resolved internally. The brash son of the present King has broken that internal compact, which will now have a direct bearing on the larger compact with the Wahhabi clergy.

That ISIS was a Saudi project funded by a not so gullible USA is now well known, thanks to the Qatari leaks. ISIS was the Saudi way of appeasing the hardliners among its clergy. A crackdown on the Eastern oil rich Shi’a provinces was also a project driven by the clergy. The war in Yemen was also at the instance of the clergy, but the call was finally taken by the impetuous Crown Prince. The strife with Qatar is also a Crown Prince project. The Qatar strife is unravelling many dirty secrets of the Syrian war. Iran, on the other hand, is savouring the Shi’a victories in Iraq and Syria, even as its allies in Yemen lock the Saudi forces into a stalemate. It has definitely emboldened Iraq, and has driven Saudi Arabia to do the unthinkable — be in an embrace with Israel, the existential enemy of the Arabs and the larger Islamic Ummah.

The impetuosity of Crown Prince Muhammad bin Salman has created a situation in which many of these forces will come face to face. ISIS has been given a new lease of life. It has always had a latent support within the Saudi clergy. With the fratricidal war let loose by the Crown Prince, sections of clergy have been disaffected. These are powerful sections that have the ideology, the capacity and the financial muscle to create an ISIS like resistance to the present monarchy. The resistance will begin in the South from the Al Qaeda controlled Yemeni territories. Iran is likely to exploit this situation by creating its own troubles in the Khaleej area where the Shi’a minority is dominant and restive. The powerful clergy community in the Hejaz area is likely to incite the public. A mature leadership would be able to solve this problem by engaging in reconciliation, but the Crown Prince does not seem capable of this. In such a situation, the Nejdis are going to be under pressure from the West, East and South. To compound the situation, Bahrain has its own problem with its Shi’a majority and Sunni rulers.

Repression will follow, setting forth a vicious cycle. Saudi forces are not very professional. Their performance in the Yemen war has been very poor. They had asked for help from a professional Army of Pakistan. Since Pakistan did not oblige due to the fear of alienating its own sizeable Shi’a minority, the GCC had to conduct its own war. The capability evidence of GCC forces has been far from flattering.

Even as I write this, the tensions between Saudi Arabia and Iran have risen over the missile fired by Housi rebels of Yemen over Riyaz airport, which Saudis intercepted(I prefer using the Urdu pronunciation of Arab words: Housi instead of Houthi, Riyaz instead of Riyadh, Abu Zabi insteadof Abu Dhabi, Ramzan instead of Ramadan, Zimmi instead of Dhimmi). Saudi Arabia has found unmistakable Iranian imprint on the missile, and regards it as an act of war. Hezboolah, a Shi’a militant outfit of Lebanon supported by Iran has become active in Lebanon, and the Lebanese PM has fled to Saudi Arabia. All the ingredients of a conflagration are, therefore, present — Two impetuous adversaries with big financial muscles, an adversarial theological narrative, big powers supporting the adversaries, and an incentive to dominate the region. Iran has an additional incentive in freeing Hejaz from Saudi control so as to have a level playing field in Islam’s holiest sites.

With this as background, this is how I think the events are going to unfold:

It is not clear as to what the final denouement could be. However, a real prospect of third world war cannot be ruled out. If that happens, there will certainly be a nuclear war between Saudi Arabia and Iran. Saudi Arabia will source its nuclear weapon from Pakistan, and Iran from North Korea.

MBS acted too soon and without the necessary preparation. Saudi economy is a one-commodity economy. It cannot sustain a protracted war. It is not even able to defeat Housi rebels of Yemen. Iran, on the other hand, has a more diversified economy with an industrial base. With the commissioning of Chabahar, it has a direct access to the Arabian Sea too.

There would be many ‘Battles of Karbala’ between Shi’a and Sunni in this war. Shi’ites have been itching to avenge Karbala for 1400 years. They may just be able to do it.

All due to the hubris of an impetuous young man by the name of Muhammad bin Salman, who broke the compact with Wahhabis too soon, in quest of modernity .