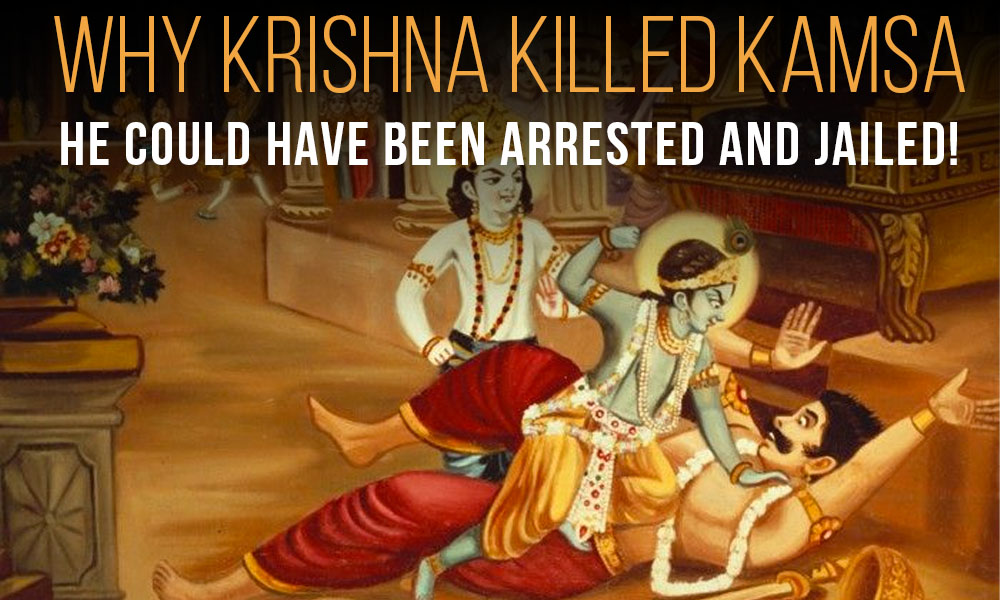 ‘Kaṃsa was dumbfounded by the action. His generals had all become transfixed in their places. Nobody was moving. The crowd was going delirious. Every guard of the arena had fled. No Magadha soldier was to be seen except his bodyguard retinue. Even they were trembling with fear. Prabala had receded and was protecting the entrance to the inner quarter as if the Magadha princesses were the only ones that mattered to him. Kaṃsa spat in disgust, “If I get through this, I will send these Maagadh packing, he thought”.

‘Kaṃsa shouted for Chāṇūra to come out. The massive hulk came out to the arena with Mushṭika in tow. The boys had melted into the crowd and were being carried aloft around the gallery in a victory procession when Kaṃsa shouted for his guards to pull the boys into the arena forcibly. ‘There was none to obey Kaṃsa’s command.

‘A deathly silence fell on Kaṃsa’s entourage. Even half of his Magadha bodyguards went missing. Kaṃsa was becoming delirious.

‘Then the unthinkable happened. The boys jumped into the arena without being compelled. They had, believe it or not, accepted the challenge of battling men twice and thrice their size. That was so because they were confident of their ability to beat anyone in combat. Krishṇa joked to Balarāma, “Dāu, the elephant is gone and now we have two baby elephants”.

‘Even Chāṇūra was petrified at the sight of Kuvalyapiḍa lying dead in the middle of the arena. His fat brain was giving him confused signals. He had mostly defeated other wrestlers with his sheer mass. Most of the time, he had only conquered weak damsels and raped them. Here was an enemy who was fleet of foot and clever of brain. As Krishṇa and Balarāma both headed towards Chāṇūra, Mushṭika intercepted Balarāma. “Hey fatso, you come here and tangle with me.” Balarāma jumped on top of him with such force that he lost his balance and fell. Balarāma used his strength to strangle the fallen Mushṭika. He got him off his neck using every bit of his strength and straining every one of his sinews. He did manage to get him off, but was totally exhausted in the effort.

‘Krishṇa, on the other hand, was teasing Chāṇūra. He wove circles around him. Chāṇūra had not watched how Kuvalyapiḍa was conquered. Every time Krishṇa came close to him, and baited him, Chāṇūra made a lunge and missed him. This went on for nearly ten minutes. Chāṇūra was completely exhausted. He had never encountered such a swift and slippery opponent in his life. He shuffled back, panting. He lost sight of his quarry for a second. That was enough for Krishṇa to pedal back and launch himself, legs first onto the chest of Chāṇūra. Chāṇūra fell back with the blow. Krishṇa also fell back, but he regained his balance in a jiffy. Chāṇūra the colossus could not get up. He just lay there huffing and puffing. Krishṇa sensed his moment. He made a big high leap and landed with full force on the left side of Chāṇūra’s chest, crushing his ribs. Chāṇūra started coughing blood. Krishṇa simply stood on top of Chāṇūra and jumped on his right side with force, crushing the right side ribs as well.

‘Chāṇūra lay there helplessly. As the blood from the broken ribs filled his lungs, he started choking. He coughed blood, but the blood was filling his lungs faster than he could cough it out. He started suffocating, lost his breath. Chāṇūra started flailing like a huge beast. In about a minute, he was silent. Chāṇūra was dead.

‘Mushṭika just could not get up. He was massive, but was more fat than muscle. Balarāma stood on his neck and choked him to death. ‘Speed and brains had killed two of the biggest human beasts and Kaṃsa just stood there watching helplessly. ‘As the two fell, Kūṭa came rushing in. Balarāma was thrown a wheel of Kaṃsa’s chariot by the Gopas. He simply swung it at Kūṭa and he was gone.

‘Another wrestler, Tushāla also jumped into the arena. Krishṇa tripped him with a leg tackle. As he fell, Krishṇa held his left leg down and jerked his right leg with such swiftness that his base came apart. As he lay there writhing in pain, Krishṇa kicked him in his crotch with such force, that he was gone.

‘Kaṃsa got up from his throne. The throne was built on the side of the middle part of arena on a high platform. It was about ten feet high. Kaṃsa sat on a high throne on the platform. He lost his equanimity completely. He not only got up but terrified as he was, he got up and stood on top of his throne, subconsciously increasing the distance from the boys who were increasingly looking like one hundred feet tall to him in his hallucinatory state.

‘Kaṃsa was shouting at the top of his voice, “Kill them, kill them, kill them, kill them…” His voice grew increasingly feeble. He looked around for his guards. Not one of them was to be seen. He did spot Prabala standing in the distance watching from the entrance of the inner quarters. He had never felt so alone. He had a sense of reality. “Am I the mighty Kaṃsa, alone with my fears today? All my carefully nurtured armies, assistants, and tyrants are all gone. My wrestlers killed. Where is my Bāṇa? Where are my Kuṭil Dharmis? Where are all those who had thrived on my largesse?” ‘Kaṃsa was trying very hard to figure out where the boys were. He had taken out his sword; he was flailing his hands about, but finding only air.

‘Krishṇa sensed the confusion in the mind of Kaṃsa from the distance. He was amused to see him clashing with the air.

‘Krishṇa picked up the vaulting pole he had used against Kuvalyapiḍa. Balarāma interjected, “What do you want to do with him. I think we can easily arrest him. His soldiers have fled.

‘Krishṇa did not agree. “Dāu, we need not be sentimental in these matters. I am very clear. Our personal Dharma should never come in the way of Rāshṭra Dharma. He declared war on us. If you let him out alive, you will give hope to those who have earned their fortunes under him. His Karma has already condemned him. Look at his behaviour. He has lost the grip over his mind. He is a confirmed scoundrel. Just put yourself in his place. Would he leave you alive if you give him another chance? Would the Yadu Kingdom be safer with Kaṃsa in jail or with Kaṃsa killed?”

‘Balarāma went quiet. He had no answer for Krishṇa’s reasoning.

‘In the meanwhile, Kaṃsa was swinging his sword and talking to ghosts.

‘Krishṇa took a few steps back, held the pole in his hands, ran with it towards the platform where Kaṃsa stood swinging his sword. A little before the platform, he placed the pole into the arena, and expertly vaulted over, going head first into the body of Kaṃsa. ‘The momentum of Krishṇa crashing into Kaṃsa was frightful. As Kaṃsa fell down from the throne, his hair running loose as he lost his crown, he tried one more time to get up. ‘Krishṇa kicked him in the scrotum. Kaṃsa’s shrieks were loud and painful to hear. Entire arena shook as if an earthquake had struck Mathurā.

‘Krishṇa kicked him again, this time in the small of his neck. The force was so great that Kaṃsa’s frame started shaking uncontrollably.

‘Krishṇa dragged him from the platform with his hair. “This lowlife had dragged my mother with her hair. Now I will serve him the soup”.

‘All hell broke loose as the crowds broke the barriers and attacked anyone from the Kaṃsa stable they could find. Even as Krishṇa was dragging Kaṃsa out from the platform, the crowd killed eight of Kaṃsa’s brothers — Kaṅka, Nyagrodh, Sunama, Shanku, Suhu, Rāshṭrapala, Srishti, and Tushṭimāna. ‘Krishṇa dragged a half faint Kaṃsa with his hair into the arena. He stood with his leg on his chest, and invoked the crowd. “Shall we arrest him and put him on trial”? “Noooooooooooo…,” the entire palace, virtually the entire city of Mathurā shook with the force of that no. The bizarre scene was that every member of Kaṃsa’s Sudharmā Sabhā was standing up and shouting no. Women were crying and imploring Krishṇa. Kanhaiya, Kanhaiya, Kanhā, Govindā, Keshava…please, please, please. Your mother is still locked up. On her honour, don’t spare him. Kill him, kill him, kill, kill, kill…

‘Krishṇa bowed to the people in every direction. He then gave an expert blow to Kaṃsa’s carotid artery, and another on his jugular vein. Kaṃsa was dead.

Postscript: (reaction of the listeners of the story):

‘Prabala ran into the inner quarters. Everyone except Jarāsandha was sobbing. Āchārya asked King and Queen to do the Purṇāhuti. After the Anuṣhṭhana was over, King and Queen served food to Āchārya Chanḍakaushika. Saudamini said loudly, ‘I don’t think Magadha should make an enemy of Krishṇa.’ Jarāsandha swore revenge. Asti and Prāpti kept distant. Prabala looked mortified. He did not know whether he would be rewarded for saving the princesses or killed for deserting Kaṃsa. Prāpti placed a hand on his shoulders and comforted him. ‘Karma, Prabala, karma. Mahārāj was killed by his bad Karma. Your kriyā was wrong, but your karma was right.’

‘Karma,’ smiled Āchārya. ‘You are right, Prāpti. Kriyā is not Karma. In Kaṃsa’s case both were wrong. His kriyā was so full of depravity that his karma had to be bad. If only the queens had not got into the vice of akarma, he might have not left the righteous path.’

Āchārya announced before leaving. ‘I am going straight to Gargāchārya’s Āshrama from here. I will do a darshan and satsang of this great ātmā. If you do come attacking, I will be in Mathurā’, he paused, ‘And I would be advising the side that would have Dharma on its side.’