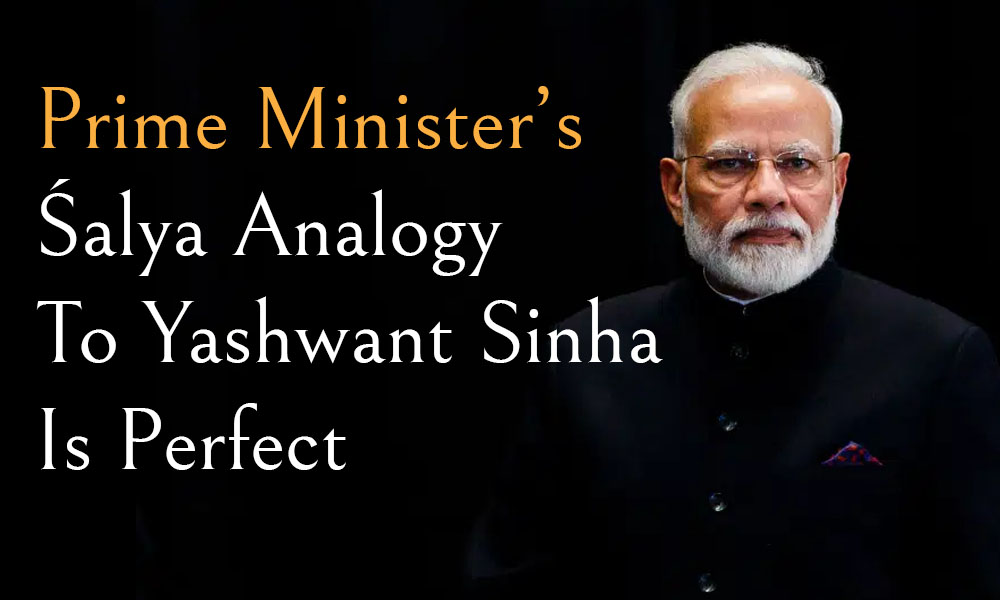 While reading Śalya’s story by Devdutt Pattanaik in Theprint.in, his interpretation of the context sounded really odd to me. While the story is mostly correct, it misses many points and misses the context completely.

Bhīṣma, the wise patriarch, was the architect of the tragedy that befell the Kuru Empire as he placed his svadharma, his personal code of honour, over his rāṣṭradharma, i.e. his duty to his Kuru nation. The entire story of Krishṇa, Kaṃsa, Bhīṣma, Kauravas, Panḍavas, and Mahābhārata is about the interplay of various strands of Dharma. Yudhiṣṭhira idolizes Bhīṣma and suffers from the same malady of viewing Dharma from a Bhīṣma like prism. It was Bhīṣma’s attachment to his personal code of honour, his svadharma, that led him to give up the throne of Hastināpur to fulfil the adhārmic desire of his father to marry a fisherman’s daughter many decades younger than him. Same attachment to svadharma led Yudhiṣṭhara to accept the order from Dhritarāṣṭra to play that fateful game of dice against his better judgment. On the other hand, Krishṇa invoked the same svadharma to make a recalcitrant Arjuna fight the Mahābhārata war. Dharma is not a one-size-fits-all contraption. It requires Viveka, or discriminatory wisdom, to achieve a reconciliation of rāṣṭradharma, kuladharma, and svadharma. Devdutt does not seem to take cognizance of these finer points of the story.

Krishṇa, on the other hand, did not have the pedigree of Bhīṣma. He was a Vriṣni, one of the Yādava clans, who were perhaps regarded as Śūdras initially, but came to be regarded as Kṣhatriyas by dint of their valour and conquests (This, by the way, is one of the finest example that varṇa was not ordained by birth in ancient India). He had a difficult birth, a turbulent childhood in which he was being pursued by Kaṃsa’s agents all the time, as they wanted to kill him. There are many lessons to be learnt from the incidents surrounding his birth — the raging storm, the pitch dark night, the journey to safety through a swollen Yamunā, the dark complexion, the equanimity with which he faced challenges and adversities. He did not even accept the throne of Mathura after killing Kaṃsa, because his motivation was raṣṭradharma, not svadharma. He set new benchmarks in many fields, perhaps even in the field of science, but he never took the mantle of a King. He is the only known figure who was called the Lord of a city, Dwarkādheesh, the Lord of Dwārka; without being its king. His story is fascinating, even on a rational plane, but he is the evolved personality — yogeśvara, who is ready to use sāma, dāma, daṅḍa and bheda to advance the cause of samājdharma and raṣṭradharma. Ordinary people are advised not to follow Krishṇa’s actions, but to follow his teachings, because only a personality in an evolved state can distinguish the relative strands of Dharma in complex situations. Narendra Modi, as any of his biographers would tell you, is inspired by Krishṇa as a guide.

Śalya is a demotivator to Karṇa in the story, but Devdutt forgets the point that Śalya was also reputed to be one of the finest chariot-drivers in the entire Jambūdweepa, the larger Indian sub-continent. Besides, he was also made the General-in-Chief of the Kaurava Army after the death of Karṇa. It was Karṇa who thought very little of Śalya, unlike Duryodhana who used every stratagem to prevent Śalya from helping his nephews, the Panḍavas. So Devdutt’s portrayal of Śalya is only a partial portrayal.

It is obvious from the above analysis that what Devdutt has got completely wrong is the context that he has ascribed to the Prime Minister. He asks whether the PM is considering himself to be Karṇa that Yashwant Sinha is able to demotivate him! This is too far fetched. The comparison is too obvious to us. It seems that he has not heard PM’s allusions to Mahābhārata in the past. He once alluded to Duryodhana with Congress in mind — ‘jānāni dharmaṃ, na cha me pravratti’ — I know what is Dharma, but that is not my way. Duryodhana told this to Krishṇa, who is the brain behind actions of Arjuna. PM has similarly spoken on various occasions, telling all and sundry that he is a doer. In Mahābhārata, the doer is Arjuna, not Karṇa. That is why Sanjay, the raconteur, in the last śloka of the Bhagvadgitā, gave out that fine essence of Mahābhārata thus:

Where there is the wisdom of Krishṇa, and dynamic action of Arjuna — therein lie riches, victory, glory, and firm policy. This is my opinion, O king! (Swami Chinmayānanda’s translation)

PM fancies himself as Arjuna, and views various motivators of his life, such as the Bhagvadgitā, Swami Vivekānanda, his Guru Swami Dayānanda, the senior pracharakas of RSS who had an influence on his life, as Krishṇa. Śalya used to demotivate Karṇa, just as Krishṇa used to motivate Arjuna. There is no greater book on motivation than Bhagvadgitā. Would Devdutt call Bhagvadgitaā as a myth, or part of a myth? It is classified as an upaniṣada in the pantheon of Indian śāstras — iti shrimadbhagwadgītā sūpnishatsu is written at the end of avery chapter. It means ‘Thus ends so and so chapter in Bhagwidgītā the upaniṣada’. Every time PM has used an analogy from Mahābhārata, he has spoken from the standpoint of Arjuna.

The conclusion, therefore, is inevitable. Narendra Modi was simply telling Yashwant Sinha to get his act together. ‘Please be like Krishṇa to Arjuna, not like Śalya to Karṇa. Don’t think I am like Karṇa that your futile talk would demotivate me. I am Arjuna and I have my Krishṇa to guide me. Thank you very much.’