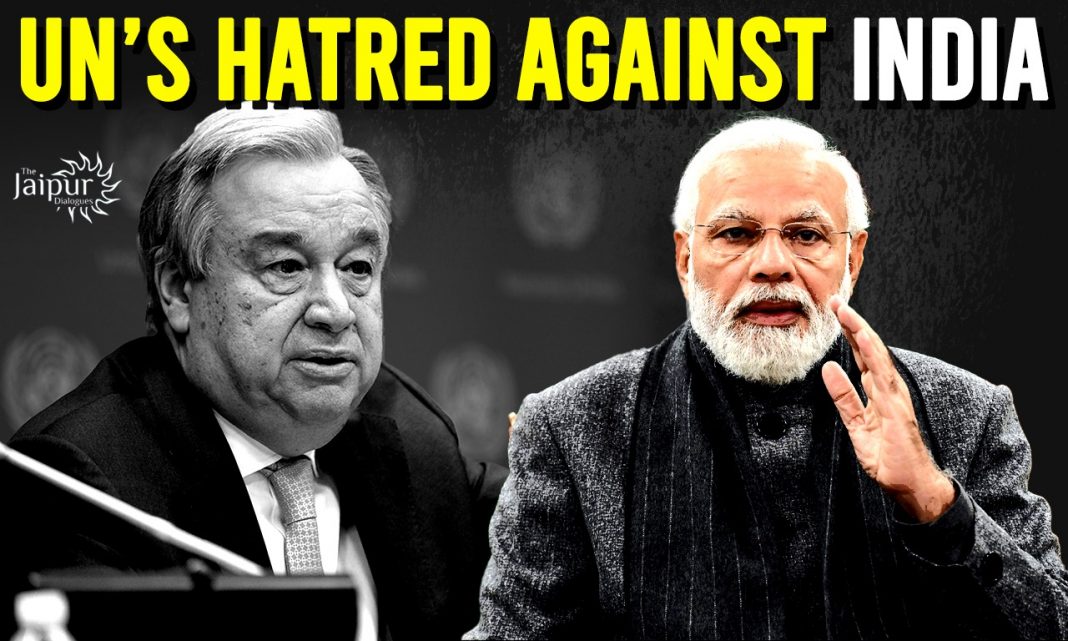 With two of UN’s special rapporteurs taking up cudgels in defense of the tainted journalist Ms. Rana Ayyub, it is high time that UN as a body straighten up their priorities and not interfere in the internal affairs of a sovereign nation like India.

Whatever is happening on the global diplomatic front, led by the UN, isn’t anything novel for India. India has suffered for years at UN members’ hands for obvious reasons. This is specifically due to UN members’ distorted perception of minorities, particularly Muslims, being the most targeted and hated group, in India. The reality is quite different, and there are no qualms about it. No doubt.

The world is reeling under multiple stresses, and people are suffering on many different fronts. However, the UN will not even consider attending to them, preferring to turn a blind eye. As an organization, the UN seems least concerned with atrocities meted out against females, including young girls in Afghanistan under the Taliban rule. The same is true of the torture endured by Hindus and Sikhs in Pakistan and even in Bangladesh. In addition to it are China’s threat to Taiwan, Africa struggling with famine, and countless other similar incidents. UN has seemingly shied away from its mandated responsibilities and has instead focused on trivial and unwarranted issues that are outside of its ambit and affect the sovereign decision-making of free countries.

In recent weeks, two UN members, Irene Khan and Mary Lawlor, who are Special Rapporteurs of the Human Rights Council of the United Nations, falsely alleged that “far-right Hindu nationalist groups” had escalated threats and attacks against the money laundering accused, purported journalist Rana Ayyub. Stepping up further on the list of false accusations, they said the following, “reporting on issues affecting minority Muslims in the country, her criticism of the Government for its handling of the pandemic and her comments on the recent ban on hijabs in schools and colleges in Karnataka.” Adding further they said that, “The lack of condemnation and proper investigation by the Government, coupled with the legal harassment it has itself inflicted on Ms Ayyub, has only served to falsely legitimize the attacks and attackers and further endangered her safety.”

The special rapporteurs didn’t leave any stone unturned in spreading lies and defamation against the Indian state, by mentioning the on-going investigation against her as a means to threaten Ms. Ayyub, where they said, “As with many of the spurious and defamatory accusations made against Ms Ayyub in retaliation for her reporting, the experts said, the false allegations can be traced back to a far-right social media group.”

As such, this type of behavior by the so-called UN experts has not been unfamiliar to Indians, especially since they view meddling in India’s affairs as their sole right and prerogative. Although, admittedly, we should understand their audacity is a consequence of their rising insecurities, their inability to tame the Indian government, their previous unhindered and unrestricted access to the powerful decision-making corridors that has now been restricted, and other related reasons that have left them bewildered and led them to adopt such rabid and anti-India stances. The so-called ‘special and concerned’ reporters have no regard for India’s inherent welfare, but rather have a vicious agenda, that of dismantling India’s right to assertion, weakening its independent identity, and shredding the very idea of its existence. Basically, they wish for Bharata to become a meek nation, one that kowtows to them.

These special rapporteurs, Irene Khan and May Lawlor, are independent experts and are members of the Special Procedures of the Human Rights Council. Although these ‘Independent experts’ do not necessarily represent the UN’s official position, making such baseless allegations against a particular independent state undermines the UN’s credibility. These non-credible allegations have been strongly rebuffed by India because they pose a serious flaw in the stand taken by both these rapporteurs and the UN in general.

There should be no doubt that the background story leading up to this current state of affairs is murky and shady, just as one can expect it to be with regards to the dubious and vitriolic journalist Ms. Rana Ayyub. In a blatant example of daylight robbery, Ms Ayyub is accused of siphoning off funds to her personal bank account in the name of donation money collected for COVID-19.

It is imperative to know the antecedents of the case, in particular to that of both of the reporters. This will enable us to understand the motivation behind the protest to shield Ms. Ayyub. Irene Khan has always been a known India-basher and one who has always tried to meddle in India’s internal affairs by taking advantage of international platforms to express her fake concerns regarding minority harassment in India. A solid reason for this anti-Indian hate is the non-renewal of the FCRA license for Amnesty International in India, due to the shady activities undertaken by Amnesty as an organization. While she was the Secretary General of Amnesty International, Irene Khan faced criticism for engaging in corruption (Déjà vu of sorts with respect to Ms. Ayyub’s case!) and aligning herself with Islamist groups. As we delve into the story, we realize her dubious ties to the Communist regime of China, which is blatantly working against Indian interests. Khan was also the Director-general of IDLO where China was one of the major contributors and just a couple of years ago, China and IDLO had signed a memorandum on the ‘One Belt One Road’ initiative. A further indicator of her closeness to the Chinese regime was her appointment as the World Monitor on Free Speech by a China-led panel; this was opposed by a Human-rights activist and an International Lawyer Hillel C Neuer, where he stated “Only in the Orwellian world of the UNHRC would a totalitarian regime that systematically silences, jails and crushes dissenting voices, and which operates the notorious Great Firewall of China to block Internet content from its people, be allowed to lead the process in selecting the next UN special rapporteur on freedom of opinion and expression.”. Many things, in this case, are at odds, including China’s appointment of someone as a monitor on free speech. This is ridiculously unbelievable, given the freedom of speech allowed and encouraged in China. Besides having a poor human rights record, China is ruled by a one-party system, unlike a thriving democracy like India.

Similarly, Ms. Lawlor was also a member of the Amnesty Irish Chapter, has been an unrepentant anti-India basher, and has falsely blamed the current dispensation for the infamous Bhima-Koregaon incident. Not only did she accuse the government, but she also made Stan Swami out to be a hero, someone whose natural death was deliberately misinterpreted as a conspiracy. She has misused the international platform time and time again to spread lies about India and create a negative image of the country. As an open terror sympathizer, Ms. Lawlor raised objections over the arrest of the Kashmiri separatist Khurram Parvez, who was eventually indicted on terror funding charges. Certainly, this smells sinister. Why would someone meddle in the affairs of another country over which she has no locus-standi, and then support someone with links to terrorism?

This is the time for anti-India bashers and hate propagandists to understand and respect boundaries, and not try to test the patience of the Indian people for their own selfish reasons. This isn’t the first time that this has happened, but human rights activists should be made aware that they shouldn’t interfere in the internal affairs of a free nation, especially if it doesn’t fall under their ambit. A sovereign and democratic nation like India doesn’t need to be enlightened by these rights activists, especially those with unclear intentions and who have nothing to contribute to India’s growth story. It is important that people understand their collective voice and speak up against such individuals, who are attempting to destroy the very fabric of our country.