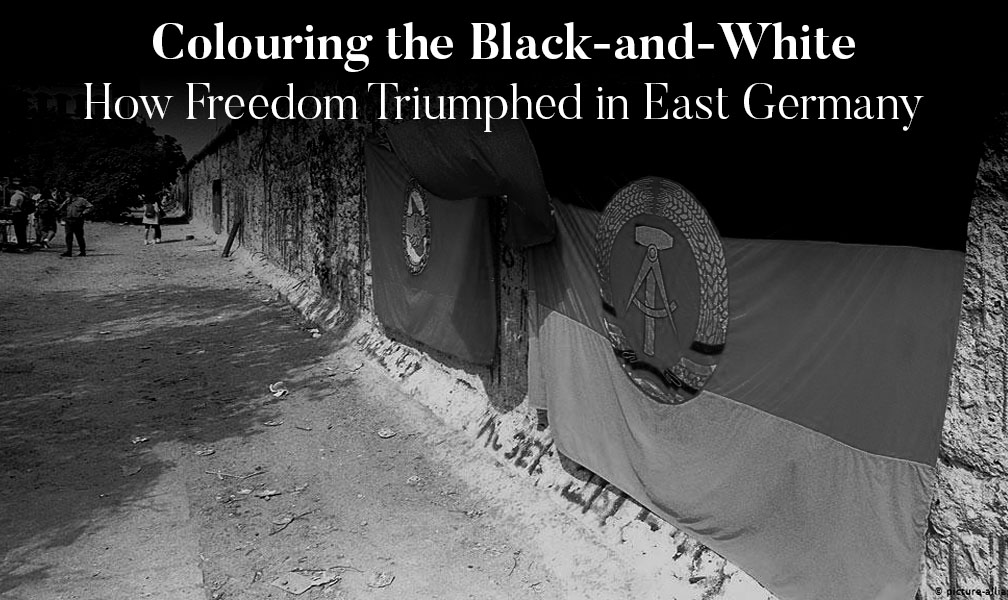 Seventeen Million Birds in a Cage

We often take freedom for granted. We take for granted our capacity of exercising our liberty through everyday choice and expression. We take for granted, the sovereign individual and the values on which it stands, of free will and liberty, which form the sub-strata of major parts of the present civilization.

What about the bird inside a cage? Is freedom something it can take for granted? Or is freedom just a distant star twinkling in the night sky, completely out of its reach? What about the millions of (then) residents of the German Democratic Republic, commonly known as East Germany? Similar to the bird in the cage, fear, restraint, abstinence, captivity, unfreedom were closer to everyday existence than freedom. Quite ironic to its name, the German Democratic Republic was neither a democracy nor a republic. It was a totalitarian communist empire. It was just another authoritarian communist state, where it was easier to find armed guards patrolling your house, than food.

Long queues in front of food stores was a regular sight. Fruits like banana, or meat items like steak, were ever rarely available. If you got hold of an apple, you could consider yourself quite lucky! Chris Harz, a German citizen writes about his visit to East Germany:

At a restaurant in (East) Berlin, I was handed a menu card. I made a choice. The waitress told me, “Sorry, we are out of that”. I made another choice. She replied the same. I learned after the third time and asked, “So what do you have?”. She pointed out only two menu options. Because of the centralized economy, there were always shortages. You could see it on empty shelves, but officially all was well. Fear trenched deep into the bones of every individual, living in East Germany. It was the atmosphere of fear that drove many East Germans to flee. Severe punishment and arrest awaited those who dared to question the government or even when doubted of doing so. One of every three East Germans was a member of the Stasi (the secret police), and hence, no one could be trusted (sometimes, not even family members and by no means relatives). At one point 90,000 letters a day were being intercepted and read by the Stasi agents, their contents often used or manipulated to put someone in jail. Reinhard Weisshuhn, a former East German opposition figure who lived under Stasi surveillance for fifteen years says:

Cliewe Juritza, an inmate of the prison for a year, after he was captured trying to reach West Germany in 1985, says:

If you look outside of the prison, the large buildings…. this was a factory of the Stasi. The production of the gadgets of espionage or observation. Altogether there were 91,000 (state security) employees……and 2,500 were working here. There were more than 100 interrogation rooms along the prison’s dim-lit halls, sinister by dint of their blandness: a desk, a table, a chair, and a phone.

To say that East Berliners lived a harsh existence, would be an understatement. When rights as quintessential as free speech, free expression, ownership, and justice, are repudiated; the idea of the sovereign individual vanishes, the intrinsic values of being a human is denied and existence itself lays at the feet of tyranny. At the Potsdam Conference (17 July to 2 August 1945), after Germany’s unconditional surrender in WWII, the Allies divided Germany into four occupation zones; three of which formed the Federal Republic of Germany (West Germany; was a parliamentary democracy with a capitalist economy and free churches and labor unions) under America, Britain and France, and the fourth zone formed the German Democratic Republic (East Germany; was a Marxist-Leninist socialist republic) under Soviet Union. Alike the country, its capital Berlin was also divided into West and East Berlin by the Berlin Wall. The former under Allied-powers and the later under the Soviets. Peter Robinson, the writer of the famous “Tear down this wall” speech, delivered by US President Ronald Reagan in West Berlin on Friday, June 12, 1987; describes his visit there prior to the speech, in an interview to Ben Shapiro:

Spring of 1987, Berlin is celebrating some 800th anniversary; Gorbachev is going to visit, the Queen of England is going to visit and the West German government, remember it was West Germany and East Germany in those days; the West German government asked President Reagan to make a visit. I got assigned the speech. I flew to Berlin, this would be six weeks or so before the President was to speak there, to do some research. I went to the wall; I went to the place where the President was going to be delivering the speech. Its all gone now but the wall was there, the Reichstag which was still parked with shell marks from the bombing at the final battle of Berlin. And behind me was West Berlin; modern city of colour, life, movement, recent model cars. And then you look over the wall, and there was almost no motion; guards marching back and forth, it was as though the colour has been leached out of it. Everything was grey, brown, the buildings even looked dilapidated. This was a place where you could feel the weight of history. Communism there, capitalism here. That was the place the Soviet advance stopped at the end of the Second World War. This was the place, the American and the British had taken over.…… That evening I went to a dinner party. West Berliners who I had not met but we had mutual friends back in Washington and so they put together a sort of a buffet for me. Fifteen or so people from different walks of life, a professor, a couple of students…… And I said, I have been told by the American diplomats that you’ve all gotten used to the wall by now. And there was a silence. Then one man raised his hand and pointed, “my sister lives just a few kilometers in that direction, but I haven’t seen her in more than twenty years; how do you think we feel about that wall?”. They had stopped talking about it, they had not stopped caring about it, they had not stopped hating it. One man talked about walking to work each morning and each morning he would walk under a guard tower where there was an East German soldier with a rifle over his shoulder, who would peer down at him with binoculars and the man said, “we share the same history, we speak the same language, but one of us is a zookeeper and the other is an animal and I have never been able to decide which was which”…… The contrast between the East and West divisions magnified to its greatest extent in Berlin. The incongruity between the two Berlins couldn’t have missed the attention of a school child. Unlike East, West Berlin was muffled up in social and economic prosperity. The economy experienced exponential growth under capitalism and free markets. The once feeble and crumbling economy after the Second World War, eventually became one of the strongest in the world. Modern automobile traffic, privately owned departmental stores, fashionable clothes, modern furnished buildings and colour, dominated the landscape of West Berlin. But these were mere fairy tales, made- up stories, dreams, an unimaginable reality for the people living on the other side of the wall.

The Fall of Communism and The Reunification

7 May, 1989 was a sunny day in East Berlin. But it wasn’t just another sunny day. The day noticed municipal elections being held for the first time in communist East Germany. All citizens were asked to register their votes and for those who forgot to do so, the statsi showed up with a prompt reminder. The public reaction was of distrust, animosity and anger when the results were revealed that evening with the National Front winning ‘only’ 98.5% of the vote (the vote had been fragrantly rigged). Tensions had been rising in East Germany and a forced fraudulent vote only meant an increment in that direction.  Increasing number of citizens applied for visas and left the country. When the reformist Hungary government opened its border with Austria, 13,000 East Germans escaped to west through Hungary. Protests, mass uprisings and mass movements grew in both frequency and stature against the incumbent in East Germany. On November 9, in an effort to ease the tensions, starve off the protests and mass exodus, the East German government introduced travel regulations: for those who wanted to go to West Germany, could now do so directly through East Germany. However, unfortunately (fortunately), no one on the Politburo had informed the government spokesperson that the regulations were to take effect the next day. When asked by a reporter when the new regulations would come into effect, he replied, “as far as I know …… immediately, without delay”. No one could have imagined the repercussions these words would have.

When excerpts from the press conference were broadcast on West German television, large crowds gathered near the check points near Berlin Wall. The security completely caught off guard, outnumbered and unwilling to use force, finally let them through. This ultimately led to the fall of the Berlin Wall which marked the beginning of the fall of East Germany. Communist rule formally ended on December 1 when the Volkshammer deleted the provisions of the Constitution that declared East Germany a socialist state under the SED. Following the fall of the Berlin Wall, the US, Britain, France, Soviet Union and East Germany were all skeptical about German reunification except for one man, the West German Chancellor Helmut Kohl, who was the key architect in Germany becoming one nation again. After weeks of negotiation and meetings, the East German parliament passed a resolution declaring the accession of East Germany to the Federal Republic of Germany, effective 3 October 1990; now celebrated as the Day of German Unity.

Moral of the Story

It was a historic day; for yet again liberty and freedom had emerged triumphant, for yet again tyranny and unfreedom had suffered a tremendous loss at the hands of the people, democracy rose from the ashes of totalitarianism, will conquered fate, for yet again good prevailed over evil, and order emerged from the chaos. Tears of joy touched the ground beneath and with it, it took to the ground any remaining bonds with the tyrannical ideology that was communism. The mask of communism fell off along with East Germany and later the Soviet Union itself, never to rise again. Capitalism once again proved to be the eminent tool of wealth creation and prosperity. The new found liberty, freedom, justice and wealth completely transformed the lives of East Germans providing them with new opportunities and hope for a better tomorrow. It ended up colouring the lives that were once black-and-white.