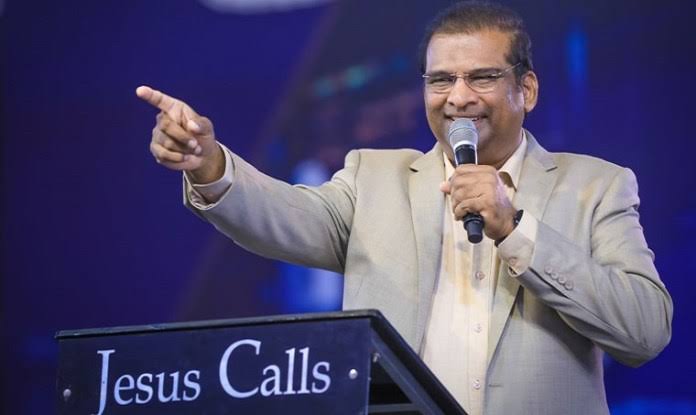 Christian missionaries while entering India had the support of British East India Company and the support of the queen of England. There are records of atrocities done by the company officials and the government people, but we lack in the historical evidences of how missionaries created havoc among the local people. St. Augustine’s atrocities done to the Hindus of Goa has become well known as the Goa Inquisition. But what about the other parts of the country? The marshmallow – like outer covering done to hide the demonic face of the evangelist is the first trick adopted by the missionaries. They enter any place as a messenger of love and peace, but what follows is not so unknown, but needs time to time revision of facts, for Hindus especially.

Activism done by Christian Missionaries is on full swing all across the country. Their targets, along with the tribals and dalits, are now the neo-middle class. One man who rules the world of evangelism in India is, Paul Dinakaran, and his family. According to the Hindupost, he runs 3 FCRA NGO’s, Jesus Calls, Samiti for Education environment Social and Health Action (SEESHA) and Karunya Research and Educational Trust. These three NGO’S with similar names are run in the US as well. This is however a well-known fact, the Ford Foundation and many other western organisations fund the whole Christian conversion ecosystem in India. And one of the leading masters of it is, Jesus Calls.

His whole family is involved actively in this missionary ecosystem. Samuel, Sharon and Stella Dinakaran are the heads of the youth group (which they call ministry), Uturn. Note the name of the group, which instils passion for the Jesus!

They are widely present on youtube as well with almost 9 lakh subscribers, which will turn upto a million very soon.

According to various sources he has approximately a wealth of about 35,000 crores. He doesn’t have to pay any Income tax or GST. He owns 120 prayer halls and 2 private jets, 1 luxury yacht, 10 luxury villas in the USA.

Paul Dinakaran’s father, DGS Dinakaran had founded the ‘Jesus Calls Ministries’ and Karunya University. In the name of spiritual services it is a whole game of fraud business and rob money out of people’s pockets. They use many kinds of tactics to lure people in this faith of Christ. Tribal, poor and young girls are the primary targets. They conduct mass gatherings in the name of prayer festivals. This is whole coordinated cabal which impersonates as someone loving, caring and a promise to rule out sufferings from their lives. The sufferings can be of many kinds. Drug addictions, diseases and poverty, are the primary concerns of the common people. They have many offers to play upon, asking people to donate.

There is a big network of Prayer warriors working as call centres. They are available 24*7. These prayer warriors are paid 2000 rupees per month. And they handle around 80 to 100 calls a day. So what is the amount Jesus Calls gets from one Prayer Warrior? Yes, atleast 1.6 lakhs! And they have hundreds of such warriors! What business and blatant play of emotions of people is happening can be seen from this evangelist mission.

The official building of Jesus Calling are everywhere in the world, and surprisingly, one of the prayer tower lies opposite to the Indian Parliament, on the fifth floor of the huge Church of North India.

In his book ‘Being Different’, Shri Rajiv Malhotra says,

‘Christian proselytisers deploy inculturation to give the appearance that they embrace sameness whereas what they believe is that dharma traditions are illegitimate.’

While keeping this thing in mind common Hindus should be aware of such people who are there to hunt you down in the name of love peace and promises to end your sufferings. The game of proselytising is not new, but their vile character gives them power to change its form every now and then to make Christianity even more relatable. As Sanatan dharma has the beauty of adopting with time and place but maintain its true form, similarly, evangelists in India are learning to impersonate this quality to achieve their poisonous conversions.