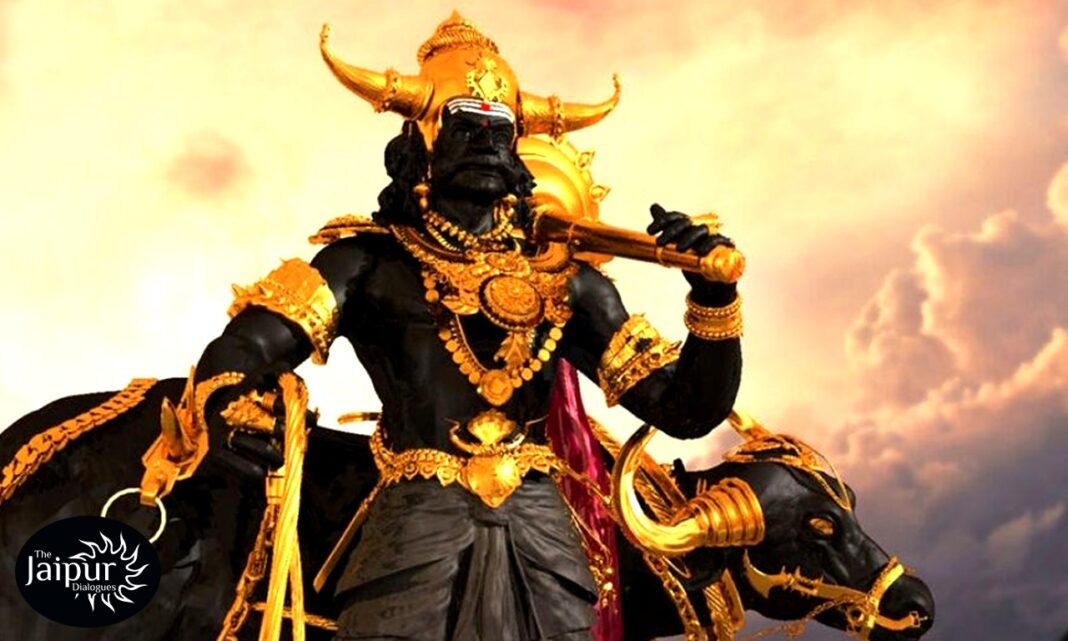 On the occasion of Deepawali, Yamaraj has a significant role. On the day before Deepawali, that is, the fourteenth day of Krishna paksha of the karthik month, narak chaturdashi is celebrated. There are many names given to this day, like, roop chaudas, Kaali chaudas, chhoti Diwali, Yama chaturdashi.

Yama-raja has always been feared in the Hindu society, because the way Lord Yama has been portrayed in the popular culture. However, he is also an object of curiosity; a curiosity which man wants to pursue but is fearful of its consequences. Yamaraj is direct epitome of DEATH. Yes, the only constant, which human wants to change in his life. However, Yamaraj has many facets in the whole Bharatiya paradigm. Since death is an inevitable part of human life, human life is somewhat woven around this idea. Therefore, significance of Yamaraj goes beyond the cultural boundaries and gets established as a whole system of history and myth which binds the whole living, non-living beings of this cosmos.

On this day, according to Mahabharata, Shri Krishna had killed a Rakshasas, Narakasur. Narakasur had captured 16 thousand women and used to torture many people. When the devatas and rishis prayed to Shri Krishna to free them of his attacks, Shri Krishna killed him. And the benevolent Bhagwan also took those tortured and exploited women as his wives. And therefore, people lit their homes with diyas on the occasion of a victory over a devil.

On this very day, worshipping Yamaraj has a lot of significance. According to Puranic history praying to Lord Yama on this day wears away the fear of death and person gets sadgati, deliverance after his or her death. Also, the untimely death is postponed by going in refuge of Yamaraj.

According to a Puranic tale, when Yamaraj prayed to Mahadev, he gave him boon that if anyone does your Abhishek and worship on the day of fourteenth day of Krishna paksh of karthik month, he will be granted a long life.

Mahadev said, that person won’t get the sufferings of hell and godly abode will be granted to that person.

Yamaraj In the Hindu Paradigm

Yamaraj is not just fearful god, but a very significant aspect of this whole cycle of life. The whole philosophy of life and death is related to him. Though, in the recent times he is seen as a matter of fear and even in the popular culture he is made an object of mockery. But, in true sense, Yamaraj has the most significance place, evolving from Vedas till Puranas.

According to Rigveda, he was the first mortal who after the death went to know the secret of life and death.  Yamaraj’s significance arises to a peak in Kathopnishad, where he is there as a teacher to the little boy Nachiketa. In that particular event, Yamaraj is a Guru, who unravels all the secrets of life and death and make sure that knowledge is the only way to achieve the highest satisfaction he is not cruel or fearsome. He is a benevolent guide whose main motive is to educate.

In Mahabharata also, we get to see a Yamaraj, who is actually Dharmaraj, the judge of your karmas. Dharma is established through the balanced accounting of one’s deeds. And that is what Yamaraj does. In the Van-parva when, Pandavas along with Draupadi are in exile, Yamaraj takes a test of all the Pandavas. While drinking water from a pond in the jungle, the four younger Pandavas died. To know the reality of the accident, Yudhisthir comes near the pond and wonders what happened to them. At this point the demi-god, the protector of the pond appears and tells Yudhisthir that, they took water from my forbidden pond. However, I warned them, but in their ignorance and arrogance they didn’t listen to me. And here comes the famous questions, the YAKSH-PRASHNA. And when Yudhisthir satisfies the yaksha with the answers of his difficult questions, Yamaraj appears who was disguised as a yaksha.

All these anecdotes and history shows that the spiritual significance of lord Yama and death lies in fulfilling ones duty of gaining true knowledge. Deepawali is a spiritual festival, when one can practice many sadhanas and enhance their knowledge. And relation of Yamaraj with this point in time is very much apt.