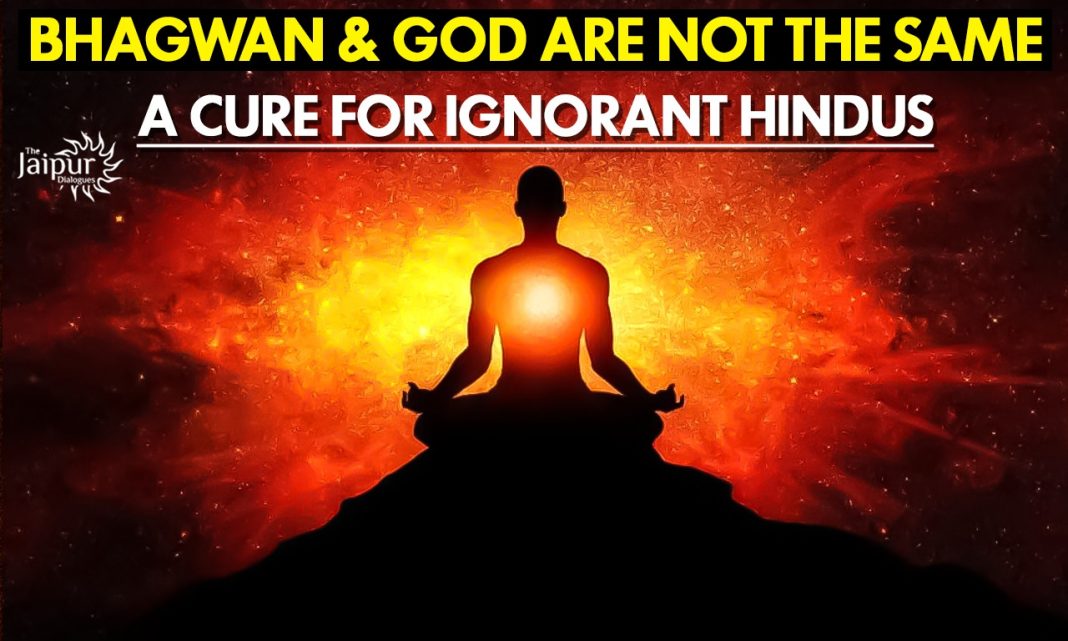 There has been a major issue among Hindus. They seem to be ignorant about their own Dharma and other religions. There has been a trend among Hindus to think all religions are equal and have the same end goal of meeting God, to attain Moksha. But is this true? Why do Hindus think all religions are equal? And how to cure this disease of Sarva Dharma Samabhav?

The major reason behind this ignorance is lack of knowledge about their own Dharma. There are no active efforts by Hindu families to teach their children the concepts of Sanatana. We fail to incorporate the sense of Dharma in our kids. We fail to teach them what Sanatana stands for. We fail to teach them how Dharma spreads the message of Universal brotherhood, how it stands for environmentalism and how it respects everyone equally irrespective of Gender. We shall deal these topics in light of comparitive analysis of Sanatana as opposed to Abrahamic thought.

Naturally, the ignorant Hindus are among the first ones to get brainwashed by the Abrahamic propaganda. The Abrahamics (Which includes the latest religion of Communism and Wokism) target everything Hindu calling it communal, casteist and regressive. Our ignorant kids fall for this trap because they’ve never been taught that in Bhagvat Geeta, Shri Krishna says that I am equally disposed to all living beings; I am neither inimical nor partial to anyone (BG 9.29).

Comparing this to other religions we understand that no god equalizes himself to human beings. Infact equating oneself to the level of God is Shirk in Islam. Islam believes God does not share his attributes with anyone. Associating partners with God is considered Tawhid. Surat At-Tawbah verses 9:1–15 consider people who commit Shirk as the enemy of Islam.

The Christian God works on similar lines- God hates idolatry (Deuteronomy 12:31; 16:22). The god further goes on to say “Anyone who loves his father or mother more than me is not worthy of me; anyone who loves his son or daughter more than me is not worthy of me; and anyone who does not take his cross and follow me is not worthy of me.” (Matthew 10:37-38 NIV). Our very own Jesus who’s often quoted for saying “Love your neighbor and love your enemies.” (Matthew 5:43-44 NIV), actually wanted to kill his enemies as per Luke- “But those enemies of mine who did not want me to be a king over them – bring them here and kill them in front of me.” (Luke 19:27 NIV)

Bhagwan vs Gods- Who smashes Patriarchy?

Almost all the Hindu scriptures guide people to respect women and treat them equally, what most feminists wilfully neglect. Manusmriti which is deemed as the most regressive book by our Wokes declares in verses 3.55-3.56 that “women must be honored and adorned”, and “where women are revered, there the gods rejoice; but where they are not, no sacred rite bears any fruit”. In verses 9.192-9.200 it gives women 6 types of inheritance rights, which by the way had to be passed through a law in the 20th century in most Western nations.

To give some other common references, we can quote Adi Parva which says “No man, even in anger, should ever do anything that is disagreeable to his wife; for happiness, joy, virtue and everything depend on the wife. Wife is the sacred soil in which the husband is born again, even the Rishis cannot create men without women.” —Adi Parva, Mahabharata Book, 1.74.50-51

Now compare this to Christianity “If a man takes a wife and, after lying with her, dislikes her and slandersher and gives her a bad name, saying, ‘I married this woman, but when I approached her, I did not find proof of her virginity,’ then the girl’s father and mother shall bring proof that she was a virgin to the town elders at the gate.” (Deuteronomy 22:13-15 NIV). If her parents cannot prove her pre-marital purity: “She shall be brought to the door of her father’s house and there the men of the town shall stone her to death.” (Deuteronomy 22:21 NIV)

The situation is not different in Islam:

Quran 4:34 . . . If you fear highhandedness from your wives, remind them [of the teaching of God], then ignore them when you go to bed, then hit them. If they obey you, you have no right to act against them. God is most high and great

Quran 2:223 says: Your women are your fields, so go into your fields whichever way you like

‘If a man invites his wife to sleep with him and she refuses to come to him, then the angels send their curses on her till morning.’ Bukhari Hadis 5193

‘Evil omen is in three things: The horse, the woman and the house.’ Sahih Bukhari 2858

The Quran in Sura 4:11 says: The share of the male shall be twice that of a female.

The Quran in Sura 4:24 legitimizes Slave girls as property of male owners: And forbidden to you are wedded wives of other people except those who have fallen in your hands [as prisoners of war]

To talk about Christian God we can just list Deuteronomy 28:15-68: “You will be cursed in the city and cursed in the country.” “The Lord will plague you with diseases.” “The Lord will strike you with fever, inflammation, scorching heat and drought, with blight and mildew.” “The Lord will turn rain of your country into dust.” “The Lord will cause you to be defeated by your enemies.” “Your carcasses will be food for all the birds of the air.” “The Lord will afflict with you madness, blindness and confusion.” “You will be pledged to be married to a woman, but another will take her and ravish her.” And to top it up, we have a mixture of Feminism and Humanism: “kill all the boys. And kill every woman who has slept with a man, but save for yourself every girl who has never slept with a man.” (Numbers 31:15-18 NIV)

Islam is undoubtedly a humanist religion. But the problem is, Islam restricts the definition of humans to its believers. The article would fall short to list everything against Kaafirs. But to give a brief idea, here are some verses:

4:56: Those who reject (Kafaru) our Signs, We shall soon cast into the Fire

3:4: Then those who reject Faith (Kafaru) in the Signs of Allah will suffer the severest penalty

41: 50: But We will show the Unbelievers (Kafaru) the truth of all that they did, and We shall give them the taste of a severe Penalty.

Surah 2:221: “Do not marry unbelieving women (idolaters), until they believe”

9:5: “And when the forbidden months have passed, kill the idolaters wherever you find them and take them prisoners, and beleaguer them, and lie in wait for them at every place of ambush. But if they repent and observe Prayer and pay the Zakat, then leave their way free. Surely, Allah is Most Forgiving, Merciful.”

3:151: “Soon shall We cast terror into the hearts of the Unbelievers, for that they joined companions with Allah, for which He had sent no authority”.

Speaking about Hinduism, we have multiple references to quote from Vedas to Geeta to Puranas. The Sanatana scriptures guide Hindus to love all human beings irrespective of their ideology. Ofcourse, this doesn’t mean tolerating the intolerance. We have to fight Adharma, but Adharma is not birth based or belief based. Contrasting to the definition of Shirk or Sin, In Sanatana you won’t be considered Adharmi because you worship some other God. Again quoting Bhagvat Geeta I am the Self, dwelling in the heart of all beings, and the beginning, the middle, and the end of all that lives as well. (10:20)

It is an open and shut case that all religions are not equal. Sanatana cannot be compared to other religions. And to be frank, this is not something that is claimed by Sanghi(s) but by the Abrahamics. It is their thought which says Hinduism cannot be compared to their ideologies because it does not believe in “One God, One Book, One Prophet”. So it’s just a gentle reminder to woke kids out there. You have a list of verses which are politically incorrect and yet followed by World’s two biggest religions. So maybe we should focus on smashing some bigotry.