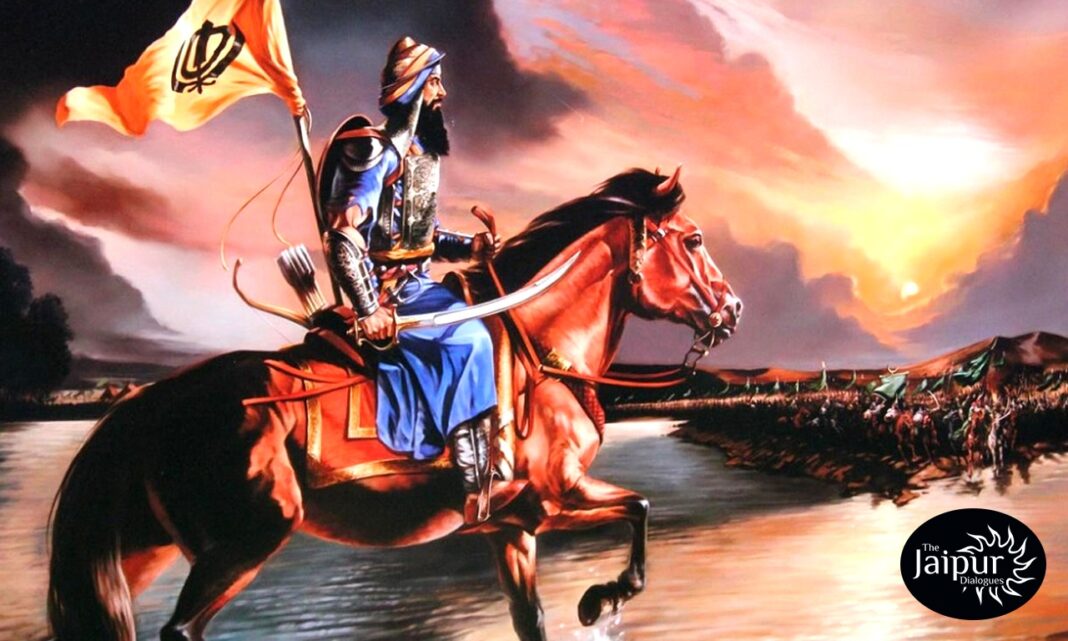 There was a time in Indian history, which was bleak and pessimistic. With the demise of Shivaji Maharaj, and then the gory execution of Shambhaji Maharaj devastated the morals of Maratha, down the Deccan. Then in the north, the execution of Guru Gobind Singh ji along with his four sons, demotivated Sikhs. However, this was not a resistance posited by Sikhs, Marathas or Jats. This was a prime example of sacrifice by great Hindu warriors and visionaries. But, this pessimism was not a permanent state, it reversed. It got reversed with the arrival of new legends and warriors.

Such was Banda Singh Bahadur, whose rise was a critical phase in the rise of Hindu power in Punjab. His resistance and neck to neck fight against Mughals is an epitome of valour. Born in the year 1670 on October 27 in a Rajput family. His father was Ram Dev settled in Rajouri, Poonch; the present day Jammu and Kashmir.

His life is an example of spiritual awakening and a destiny which was ordained by Bhagwan. A 15 year old boy, Lachman Dev, abandoned his home and started wandering in search of the answers to his questions. He was troubled by the death of a doe by his arrow, which had pierced the doe’s body. During his wandering period, he met many saints and sadhus. Eventually, he met Janaki Das, who changed his name from Lachman /dev to Madho Das. He was taken into the ‘bairagi’ sect, therefore, became Madho Das Bairagi.

Then he shifted his movement along the southern of Bharat, he reached near Panchvati in Nashik. There he got his new guru, Aughar nath. And he eventually got deeksha in tantra and aghori sect. Later, in Nanded, he set up his ashram to practice further spiritual life. But life had to take a new turn, a complete reversal.

A Sikh, A Kshatriya

On 3rd of September, 1870, Madho Das had a chance encounter with Guru Gobind Singh Ji.

The tenth Guru of Sikhs ordained him into Sikhi, and asked him to leave his ascetic life and become a warrior.

Usually, it happens that people renounce their life after toiling for years, it was a rare case of coming back to ‘karmashetra’ after renouncing everything. He was renamed to Banda Singh Bahadur, the disciple of Guru.

He was meant for the arduous task of crushing down the Mughals who were torturing and exploiting the Hindu masses. The governor of Sirhind, Wazir Khan had to be taught a lesson. Banda Bahadur ji was appointed as the new military commander of Khalsa army. He was given 5 advisors; namely, Baj singh, Ram Singh, Binod Singh, Kahan Singh and Fatah Singh. He was given a ‘Hukumnama’ by the Guru, which asked all Sikhs to join Banda Singh in his fight against jihadi forces. He eventually managed to form an army of 40 thousand men and defeated the Mughal forces of Wazir Khan. This was the ‘battle of Samana’.

But again Wazir Khan returned to fight against Banda. This was the battle of Chapppar Chiri of 1710. But this became the death of that atrocious Mughal general on the hands of Banda Bahadur. This helped him extend the Sikh territories from Sutlej to Yamuna. He established his capital at Lohgarh and also issued his coins. This time also bought reforms in administration

In the year 1715, Mughal emperor Farrukh Siyar captured Banda Bahadur by the army sent under Abdus Samad. Banda Bahadur was tortured and killed in a public platform. On 9th of June, 1716 he was executed. His skin was peeled, eyes were gouged and limbs cut down. This was a Jihadi, hateful and gory crime done by the Mughals.

Banda Bahadur outlived a man’s potential and made his name eternal in the annals of great history of time.