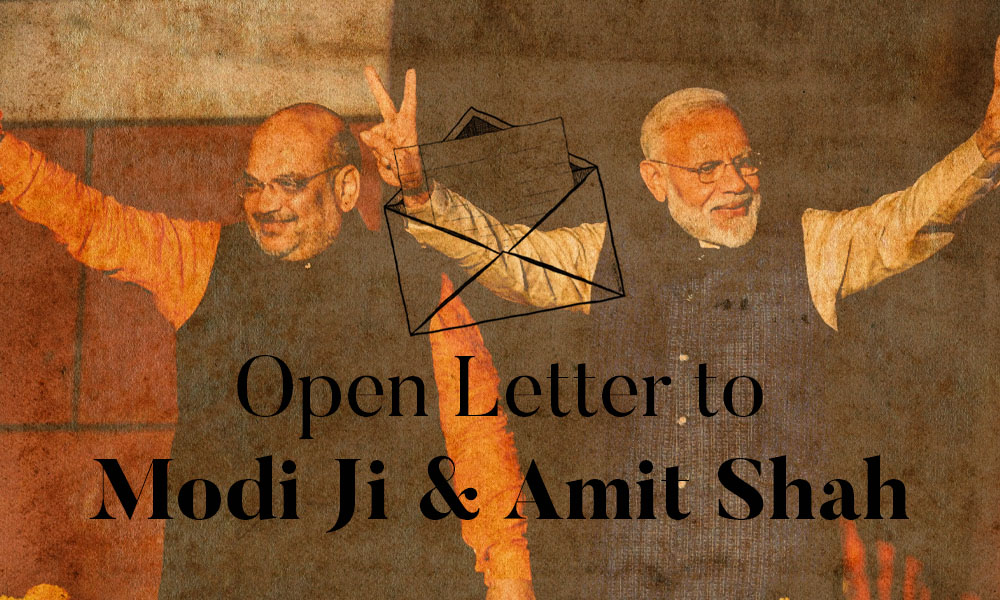 We are pained to write you that we had brought a full majority government back in centre for a second term with a lot of hope. However, the actions in the recent past have been very painful and discouraging on your end. When we noticed the duo of Modi and Shah in 2019, we were expecting the Jugalbandi of Gujrat to be portrayed on a bigger scale, but what we have noticed in the past few months is indicating that you seem to have lost your path. We admire you for what you did in Kashmir. You abrogated the special status, a long-standing dream of every nationalist. We also admire you for laying the foundation of Ram Mandir without paying heed to the ‘Secular Media’. But while admiring you for your good works, we also blame you for what happened in Bengal. We blame you for being indecisive in controlling the violence in Bengal. We blame you for not recognizing the selective genocide against Hindus post results in Bengal. We blame you because we expected you to
better. We blame you because we had hoped better from a Hindu Nationalist government. We wanted you to be a Savarkarite- Clear thought process and swift execution. We did not expect a Nehruvian leader to take us back to the path which we left way back in 2014. Honourable Modi Ji and Respected Amit Shah Ji, this is a letter from the people who supported you and defended you against all the adversaries. This is a letter from the people who voted for you and influenced their friends and families in your favour. This is a letter to enlist what we expect from you.

First, the biggest grievance and the biggest demand is to change the educational syllabus of our country. We have been taught the same history for the last 70 years and now every nationalist quarter of the country demands a change in syllabus. We’re fed up with too much Mughal literature in our syllabus. We don’t want to see the history of Islamic Invasions. We want you to teach our future generations about the Heroic Resistance to the invasions. We want you to teach the students how Indian Civilization has survived for ages against all odds, against all atrocities. But this, of course, if you’ve not fallen to the communist discourse that India was born in 1947. Because if you do think India was a civilizational state, we want you to include more of our Vedic History, we want you to teach Maths through Shankuntala, we want you to include Sanskrit in every school (even if
it’s optional). We don’t want someone who takes pride in saying- we have not changed a single comma from the textbooks. We want someone who can set the records of history straight. As R.C Majumdar had said,

“National integration based on a willful blindness to the recorded history of the havoc wrought by Islam in India, could lead only to national suicide.”

Second, we want you to be a decisive leader like you were during your tenure as the CM of Gujrat. Actions have consequences, but your silence has consequences too. Abdicating responsibility and relying completely on Supreme Court to run the country is not what we expect from a government having 303 Seats in Lok Sabha. We saw the inaction during Shaheen Bagh which translated to Delhi Riots. We saw the inaction during the alleged ‘Kisan Andolan’ which translated to the Republic day violence. We saw the inaction in Bengal which translated to the violence and torture of your cadre after the results. Dear Modi Ji and Amit Shah Ji, we want you to roar the same way you did in Gujarat. We don’t want a weak PM as we had during the UPA years. We want a leader who stands strong and asserts himself because if you show you’re weak, these radicals and vulture media will walk all over you. So stand up and assert, because the antidote to power is not weakness, it is a
bigger power.

Third, we want you to bring the Uniform Civil Code. Secularism which was called ‘Pseudo-Secularism’ by the BJP is harnessed more by the same party after coming to power. To gain Sabka Vishwas, you are compromising on your principles. To make you aware Mr Prime Minister, the Muslims in India are not just Ashrafi Muslims, why don’t you pick the cause for Pasmandas? The Pasmanda Muslims are suppressed by the Ashrafi class who usurp all the resources and still claim victimhood. If you want to gain confidence, why not bring in a law similar to the Hindu Marriage Act for Muslims to usher in social reforms. Why not stop funding the govt money to these Ashrafi foundations? Why not scrap Shariat in a secular country? Why not smash the Ashrafi Patriarchy? Why not get the Waqf board completely under the control of govt? Why is Hindu taught secularism while others are promoted and incentivized to be communal? Mr Prime Minister, we want you to act according to the secular spirit of the constitution and stop giving special rights to a particular community,
because by definition that makes India a communal country.

Fourth, and one of the most important demands, we want you to bring in a law freeing the temples from the clutches of the state machinery and give it back to our community. If you truly wish well for the community, you should treat Hindus at least with a par to other communities. The state of Hindus in India is like a second-class citizen. We are living like Zimmis even in Independent India. We don’t have the right to govern our religious places, neither do we have any special rights to establish institutions. Article 25 of the constitution which openly promotes the propagation of religion is blatantly used against Hindus to convert them either to Christianity or to Islam. We think by freeing our temples and letting the community manage its affairs, we could solve most of the problems. A temple was a centre of economy in ancient India and if the temple is managed by the Hindu community themselves, it will also turn out to be the centres of knowledge, prosperity, philanthropy
and social reforms in India. To counter the attacks on Hinduism the only way is to let the temples take lead.

Fifth and the final one, we want you to play on the front foot. This is the age of narratives. We want you to set the narrative of India on the right terms. We want an aggressive PR manager who is knowledgeable to brief the media and debunk the false narratives promoted to destabilize the country and defame the image of India. We want the government to act aggressively against the Social Media Giants who want to be the new East India Company. We want a more dynamic I&B Minister who can stand up and ask Twitter to stay within its limits. You are the state, a corporate company cannot be bigger than the state. We want you to stop appeasing the media persons who start the day by Hindumisia and end the day with Anti-national propaganda. We want you to stop playing to enter their good books because frankly, that is not going to happen. It would be better if
you support your media and draw a bigger line next to Lutyens Media.

Dear Modi Ji and Amit Shah Ji, we speak to you with hope. We still hope you’ve held the Saffron flag in one hand even if you have the secular constitution in the other. We hope that you’re not overwhelmed by the majority of the seats you have, because BJP was a much aggressive party with even 1/3rd of the present seats. We hope you’ve not gone into the phase where you’ve started romanticizing the Sadgun Vikruti we had over the years. We hope we’ll get a government that will roar with confidence and work for the cause for which it was elected. We hope you remain true to your Hindutva credentials. Because, in the end, we just want to convey to you that this is not a oneway street. We don’t have any option, but neither do you.