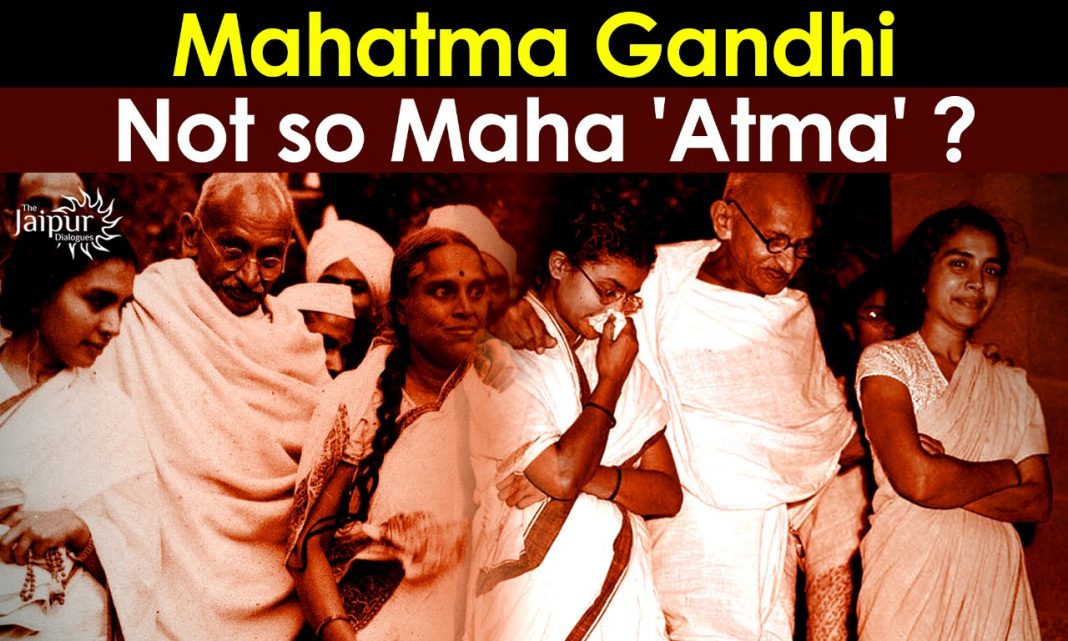 With the recent debate started across India by the Hindu seer Kalicharan Maharaj regarding the atrocities of Mahatma Gandhi- the Great on Bharatwasis, has been rightly raised so.  It is high time that the contributions of our ‘Father of the Nation’ shall be brought to the forefront of the Indian public and be scrutinized.

In today’s times how can someone be treated as someone so above the law that she or he becomes untouchable for the general public? Gandhi always tried maintaining a presence amongst masses and retaining connect with everyone, or so he wished to portray that image. Whatever the case be, he cannot be treated as a Prophet for all and in absolutely no way can he be worshipped as a demigod for people. How is it possible that Hindu gods can be insulted and Gandhi being a living mortal can’t be criticized? This jailing incident of Kalicharan Ji indicates towards the autocratic behavior meted out to the dissenters of Islam or those who criticize Allah. This points towards the way underlying Sharia Laws are practiced in the country by the Mullahs and the way Kalicharan Maharaj has been jailed, shows that Gandhi Ji has been treated as a Prophet, one whose existence has been in juxtaposition with the Sanatan roots of India.

Did anyone ever come to think of the fact that why across recent history post independence, only Gandhi was treated as the poster boy of India’s war for independence? Irony lying in the fact, that someone like him was made the Father of the Nation whereas, countless people across the country who gave ‘balidan’ to secure our freedom have no depiction, at all. How could the so-called Father tolerate the injustice being meted out to his fellow freedom fighters? Didn’t that hurt his conscience and how could he allow for such a painful partition? The one painful incident, for which the tremors can still be felt today and shall be felt for coming many years down the line. He gifted a legacy of bitter memories, subjugation and the unfortunate birth of a failed state called as Pakistan.

Did anyone ever wonder why did Britishers revere Gandhi so much, that till date he has his busts’ in London and many other western countries? Were they so impressed by his resilience against them in the War of Independence, or there was a deeper malice behind these actions? The answer can be gauged from the following excerpts.

Ellen Wilkinson a British MP from the House of Commons stated that, ‘Gandhi was the best
policeman that the Britishers had in India.’

Clement Attlee also mentioned this clearly that Gandhi had negligible contribution in the Indian Freedom struggle and it was S.C. Bose who was the one leading the fight for Indian independence, from the forefront.

This shouldn’t come as a surprise that why Gandhi was promoted on a global platform…and why not? The Britishers had found a perfect ally in him and that’s the least they could do to pay tribute to him, by installing his busts and making him a messiah for the world peace.

After the recent action taken by the Chhatisgarh Congress against Kalicharan Maharaj, who had rightly expressed his thoughts against M.K Gandhi had irked the ‘Congressiyahs’, so much so that they arrested him. So now Gandhi has been made a prophet and rightly so, because this ultimately proves that he indeed was a prophet for Muslims and nothing to do with such a person shall be associated with Sanatan.

How he orchestrated small yet significant steps to alienate Hindus from the Hindu Dharam and is visible in the fact that he changed the lyrics of ‘Raghupati Raghav Raja Ram’ from its original version to suit the needs of his secular friends …otherwise why would any Sanatani bhajan have lyrics like ‘Ishwar Allah Tero Naam’ (this appears nothing more than a propaganda and a blatant hogwash).

Though understandably Gandhi was always in awe of Islam, but he very conveniently forgot that in Quran (4:48) it is mentioned that, ‘Indeed, Allah does not forgive association with Him, but He forgives what is less than that for whom He wills. And he who associates others with Allah has certainly fabricated a tremendous sin.’ Then how can he simultaneously associate Allah and Ishwar? Wouldn’t that be a punishable offence as per Islam? And why wasn’t this objected by the pseudo seculars ever?

Gandhi was influenced by Tolstoy since his childhood, as a result he developed a myopic view of the world, because all he believed and did was coming from a world of fantasy, staying above reality and that’s why a lot of his actions didn’t create an effective as well as a long-lasting impression on ground. Gandhi was the focal point involved in finishing Arya Samaj (thankfully, he was unsuccessful), worked in favor of Khilafat movement (ever wondered what was India to gain out of it, being a Sanatani country?). Yet, this man to foster his secular credentials pushed India in the fray (for once, Britishers were right)… so what did India have to gain in the Khilafat movement? That’s because Muslims were affected by it and that’s primarily the reason he returned his honor of ‘Kaiser-I-Hind’ bestowed on him by the Britishers.

So why does Congress and its ilk always force his identity as the Father of the nation? It’s because he can be projected as a secular figure for all and be conveniently molded to suit the needs of Hindus and Muslim, alike. So, Congress basically fires the canons off Gandhi’s shoulders.

Gandhi’s book, ‘Hind Swaraj’ is taken to be an ideological bible of his ideals. To any layman reading the book it will be full of idiosyncrasies and illogical blabbering. There are many examples mentioned in the book which have no standing in the practical world and rather is a collection of teachings for Hindus for how to be meek, weak and how to always beg for forgiveness.

Simply put, he could have actively campaigned by the virtue of his position and not allowed for India’s painful and traumatic partition and could try to maintain the socio-religious balance by helping Hindus in their struggle to protect Hinduism. It’s highly unfortunate that because of some miscalculated steps, a failed terror state of Pakistan was created, of which India and the rest of the world are still paying the price for.

Gandhi practiced deep secular values, and preached Islamic values which influenced his children, that one of his sons’ converted to Islam and was re-converted to Hinduism by Arya Samaj on behest of his respected wife Shree Kasturba Gandhi.

“I want to tell you only one thing and it is that we should not try to kill any Muslim. Let them kill if they want.”

That Gandhi revered Koran as a pious book can be understood from the fact that he allowed the same to be read in a prayer meet in his presence, where he said, “What the Muslims have done is not good, but what harm has the Koran done? If one devotee of God commits a sin, shall we stop repeating His name? ….If the devotees of God say that what the Hindus have done is bad, does it also mean that the Gita is bad?”(Collected Works of Mahatma Gandhi, VOL. 96: 7 JULY, 1947 – 26 SEPTEMBER, 1947, p. 410)

Many historians won’t give real answers because they all belong to the league of Max Muller type pseudo-intellectuals who will try to hide the truth behind what transpired behind the closed political walls. What ‘Mahatma’ Gandhi practiced in terms of practicing celibacy and conducting sexual experiments needs to be brought out in front of the world and let the public decide what is right or wrong. Ultimately, it’s the people of the nation who decide what they want.